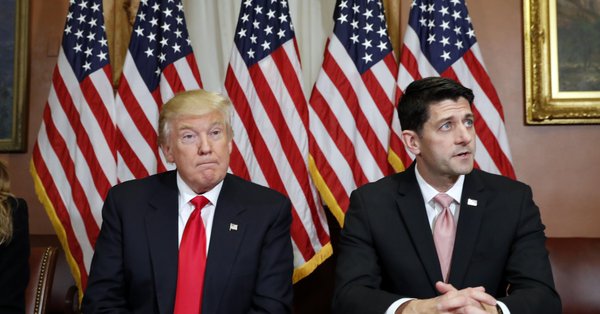 “When Greg Gianforte (R), the Republican running for an open House seat in Montana, was asked on Thursday whether he would have supported the bill repealing the Affordable Care Act that passed the House that day, he declined to answer,” the New York Times reports.

But on the same day, during a private conference call with Republican-leaning lobbyists in Washington, Gianforte offered a more supportive view of the health bill: “The votes in the House are going to determine whether we get tax reform done, sounds like we just passed a health care thing, which I’m thankful for, sounds like we’re starting to repeal and replace.”

“Nobody dies because they don’t have access to health care.” — Rep. Raul Labrador (R-ID), quoted by the Idaho Statesman, during a town hall meeting defending his vote on the GOP health care bill.

New York Times: “It is far too early to determine whether 2018 will bring a political wave, but the House’s approval of a deeply unpopular health care bill on Thursday has handed Democrats a potent line of attack for the midterm elections. While Republicans believe that fulfilling a seven-year promise on health care will energize their base next year, Democrats are anticipating a backlash that may put in jeopardy a Republican House majority that once seemed unshakable.”

“Democrats are recruiting challengers aggressively, even in conservative-leaning districts, importuning an eclectic group of could-be candidates that includes a Minnesota gelato baron, a former candidate for governor of Kansas and the mayor of Syracuse.”

Said DCCC chairman Ben Ray Luján (D-NM): “No district is off the table.”

“This week’s vote to replace Obamacare has scrambled the 2018 House landscape, jeopardizing Republican lawmakers across the country and potentially endangering the party’s longstanding grip on the chamber,” Politico reports.

“More than a dozen senior Republican strategists, lawmakers, and potential candidates expressed varying degrees of concern over the political implications of the health care push. Some predicted that House members would face a fierce backlash from voters, while others said the party had erred badly in rushing through a bill that lacked broad public support.”

Ross Douthat: “As written, the A.H.C.A. basically takes Trump’s gift to the party and hurls it off the highest possible cliff. It is not just the scale of the likely insurance losses, or how much the rich benefit from repeal relative to everybody else. It’s also the gulf between that reality and what Trump and various Republican leaders explicitly promised — insisting that their plan would deliver better coverage, lower premiums, and a lot of other things that have since taken a back seat to making room in the budget for more tax cuts.”

“When President Obama said […] that ‘if you like your plan, you can keep your plan,’ his party ultimately paid for it. A reasonably competent Democratic Party, with something like the A.H.C.A. to run against, should be able to make Republicans pay dearly in their turn. Indeed, the A.H.C.A. should make the Democrats’ various internal dilemmas easier to resolve.”

Politico: “The House Republican vote Thursday to repeal and replace the Affordable Care Act means the GOP now has to answer for every problem with the health care law: the premium increases due to materialize this summer, more insurers leaving the markets, and regions where no one is willing to sell coverage at all anymore.”

“Democrats — who were blamed for every problem in the health industry, from rising premiums to overbooked doctor’s offices to long emergency room waits — couldn’t be more excited to give it to them.”

This is notable. NRCC chair Steve Stivers thinks as many as 10 House Rs could be on tap to retire:https://t.co/I4vkuktRm8 pic.twitter.com/ZSGP9Qp8L8

Politico: “The DNC headquarters remains mostly empty, devoid of almost any senior staff. It has a new chairman, Tom Perez, but there’s still no executive director. There’s a completely new organizational chart, but the gutted political, finance, and tech offices remain in search of new leaders. In other words, the DNC is showing signs of life after a long period of dormancy, but progress is slow. And it’s about to get more painful as Democrats prepare to embark on a delicate round of group therapy sessions — otherwise known as unity commission meetings — that could reopen intraparty wounds from the Bernie Sanders-Hillary Clinton presidential primary fight.”

“In private conversations with fellow Democrats, new Chairman Tom Perez describes the precarious situation as trying to repair a plane that’s already in the air. The committee had been largely neglected by party leadership in the final years of Barack Obama’s presidency.”

Andrew Sullivan: “You might think Obamacare would violate my generally conservative principles, but it didn’t. In fact, it seemed to me to be an effective marriage of conservative principles and, well, human decency. The decency part comes from not blaming or punishing the sick for their condition. The conservative part comes from the incremental nature of the reform, and its reliance on the private sector to provide a public good. For good measure, it actually saved the government money, and it slowed soaring health-care costs.”

“The exchanges, with predictable early hiccups, largely worked — a case study in the benefits of market competition. The law allowed for experiments to test how efficient health care could be. It even insisted on personal responsibility by mandating individual coverage. And the concept of insurance is not socialism; it’s a matter simply of pooling risk as widely as possible. If any European conservative party were to propose such a system, it would be pilloried as a far-right plot. And yet the Republican Party opposed it with a passion that became very hard for me to disentangle from hatred of Obama himself.”

Was taking a pic of Trump and Snoop Dogg at Frieze and Martha Stewart walks up like this #america pic.twitter.com/nwvV96tUMU

Nate Cohn: “If the political consequences of President Trump’s health bill are anything like those of President Obama’s, the vote on Thursday could become a litmus test for moderate, Democratic-leaning voters who often vote Republican in statewide or congressional elections.”

“A study by the political scientists Brendan Nyhan, Eric McGhee, John Sides, Seth Masket and Steven Greene showed that the Democrats who voted against the A.C.A. outperformed those who voted for it by a net 10 to 15 points in 2010… Our estimates are lower, at around 5 to 10 points, in part because many of the Democratic A.C.A. opponents fared particularly well in the 2008 elections, but it’s a considerable effect either way.”

“This doesn’t necessarily mean that the Democrats would have done 5 to 10 points better in the 2010 midterm elections if they had never pursued the Affordable Care Act. It just means that the members who didn’t vote for it did better than those who did.”

Prediction: most (nearly all?) Democrats in the 2020 primary will support Medicare for all.

Jonathan Gruber: “The primary rallying cry for this week’s passage of the American Health Care Act was the claim that the Affordable Care Act was “imploding.” Republicans argued the rapidity and lack of clarity with which this radical bill passed the House was necessary given how quickly the ACA was “falling apart.” They cited as evidence the recent large premium increases and the growing number of counties with no insurers.

What supporters of the AHCA are not admitting, however, is that the ACA’s current failings are due to the misguided policies of Republicans and particularly the Trump administration. Before Donald Trump was elected, there were no places in the country where individuals could not buy insurance on the exchanges. The large premium increases announced last year were a one-time correction to make up for insurers’ dramatic underpricing in the first years of the ACA. The problems we are seeing now are due to the uncertainties injected into the market by the Trump administration’s actions to undermine the ACA’s success.”

Forget they used a 💻.