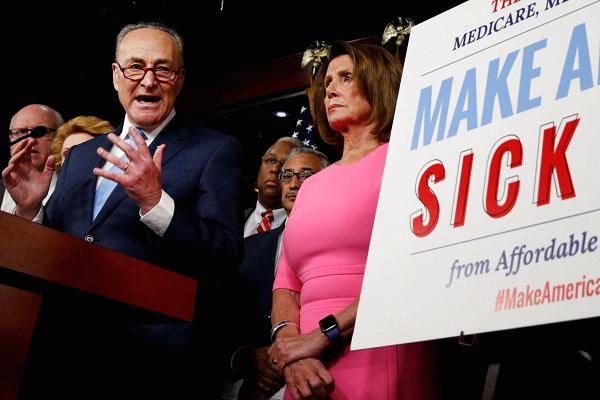 “House Democrats think they’ve finally found their path back to power: Republicans voting to repeal Obamacare,” Politico reports.   “Democrats don’t actually want the law repealed. Under their dream scenario, House GOP leaders would muscle through their controversial health care bill only to watch it die a long, painful death in the Senate, where it has already received a lukewarm reception from Republicans. Obamacare would stay intact while the House Republicans who voted to gut the law have a big shiny target on their back heading into the 2018 midterms.”

As once and future Speaker Nancy Pelosi said yesterday, I want them to vote and I want that vote to be tatooed onto the forehead of every House Republican for this few epochs.   If I were to have sympathy for Republicans, and I don’t, I would realize that they face a terrible quandary.  But it is a quandary entirely of their own making, and Karma is a bitch or a bastard.   They can vote yes and pass this bill that is dead in the Senate because it removes 1) the guarantee of coverage for preexisting conditions, 2) the ban against lifetime and illness coverage caps and 3)  the essential and required benefits provisions that every policy had to provide.   But if they do that they will lose their next general election race in 2018.   Or they chose option B, which is not voting yes on a bill you and your party have promised your base you would do for the last eight years, which will either 1) guarantee a primary race that you will lose and/or 2) depress your base turnout such that you lose the general election.

So if you are a Democrat or a liberal that is upset that a vote is happening today, don’t be. There is nothing but upside for us politically.  I know that is craven, but I do say that as a person who has a pre-existing condition and may die without healthcare coverage.   But we discuss the political angle here at BD, and that is the political angle.

Finally, a new Politico/Morning Consult poll finds 52% of Americans — and 48% of Republicans — oppose weakening federal protections for those with pre-existing medical conditions.   “Only 38% of voters surveyed support allowing states to opt-out of these protections — a figure that underscores the struggle House Republicans and President Trump are having in corralling votes from GOP members who represent districts that lean toward Democrats or are evenly divided.”

2 comments on “Democrats Win No Matter The AHCA Vote Outcome”