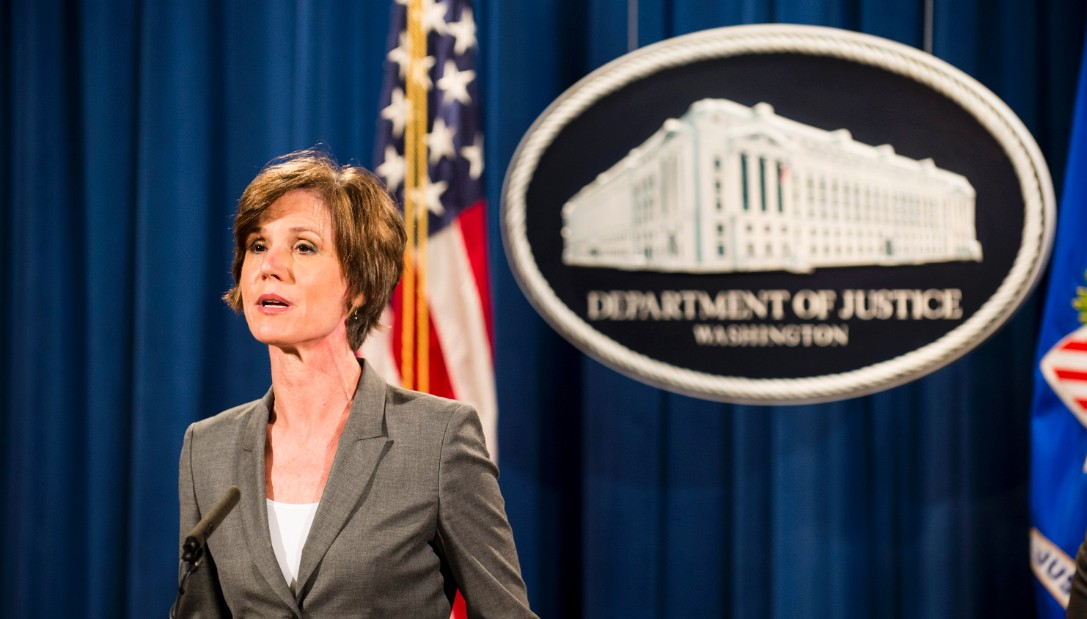 Former Acting Attorney General Sally Yates “is prepared to testify before a Senate panel next week that she gave a forceful warning to the White House regarding then-National Security Advisor Michael Flynn nearly three weeks before he was fired, contradicting the administration’s version of events,” CNN reports.

“In a private meeting January 26, Yates told White House Counsel Don McGahn that Flynn was lying when he denied in public and private that he had discussed US sanctions on Russia in conversations with Russian Ambassador to the US Sergei Kislyak. Flynn’s misleading comments, Yates said, made him potentially vulnerable to being compromised by Russia.”

Evan Osnos: “During the past few months, I interviewed several dozen people about the prospects of cutting short Trump’s Presidency. I spoke to his friends and advisers; to lawmakers and attorneys who have conducted impeachments; to physicians and historians; and to current members of the Senate, the House, and the intelligence services.”

“Although some of my sources maintained that laws and politics protect the President to a degree that his critics underestimate, others argued that he has already set in motion a process of his undoing. All agree that Trump is unlike his predecessors in ways that intensify his political, legal, and personal risks. He is the first President with no prior experience in government or the military, the first to retain ownership of a business empire, and the oldest person ever to assume the Presidency.”

A new Anzalone Liszt Grove Research (D) poll in Georgia’s 6th congressional district shows Jon Ossoff (D) just ahead of Karen Handel (R), 48% to 47%, well within the 4 percent margin of error. “It has a scant 5 percent of voters in the district as undecided – reflective of the all-consuming nature of the nationally-watched race.”

President Trump “has invited conservative leaders to the White House on Thursday for what they expect will be the ceremonial signing of a long-awaited—and highly controversial—executive order on religious liberty,” Politico reports.  This Order will allow “broad exemptions for people and groups to [discriminate] under virtually any circumstance.”  The groups most likely to be discriminated against include, but are not limited to, gays and lesbians.  But I am sure any non-evangelical Christian is now on the chopping block if they offend the oppressed white Christian majority.

“The signing would represent a major triumph for Vice President Mike Pence—whose push for religious-freedom legislation backfired mightily when he served as governor of Indiana—and his allies in the conservative movement.”

May Donald Trump, Mike Pence, and every single Republican in favor of this burn in hell for all eternity.

“It’s no longer just Vladi­mir Putin. As he settles into office, President Trump’s affection for totalitarian leaders has grown beyond Russia’s president to include strongmen around the globe,” the Washington Post reports.   “In an undeniable shift in American foreign policy, Trump is cultivating authoritarian leaders, one after another, in an effort to reset relations following an era of ostracism and public shaming by Obama and his predecessors.”

Rick Klein: “The man likes his strongmen. From Vladimir Putin to Xi Jinping, to the heads of Turkey, Egypt, Thailand and now the Philippines, President Trump has broken with bipartisan tradition to offer praise and even a smattering of White House invites to a rogues’ gallery of despots, dictators and bad dudes. Now comes Kim Jong Un, the North Korean leader whom Trump told CBS is a ‘smart cookie’ and whom he told Bloomberg News he would be ‘honored’ to meet ‘under the right circumstances.’ This is shaking things up, big league – in ways that challenge Republican orthodoxy and comfort levels, and mark a break from longstanding U.S. policy of seeking to isolate bad actors on the world stage.”

President Trump told Bloomberg that he would meet with North Korean leader Kim Jong Un amid heightened tensions over his country’s nuclear weapons program if the circumstances were right.

Said Trump: “If it would be appropriate for me to meet with him, I would absolutely, I would be honored to do it. If it’s under the, again, under the right circumstances. But I would do that.”

Vox’s Jeff Stein and Tara Golshan have 5 winners and 3 losers from the Congressional Budget Agreement on Sunday:

I’d add some more winners to the mix: Nancy Pelosi, Chuck Schumer and/or Congressional Democrats in general, because I hear from Mike Mulvaney that Donald was very upset that Nancy and Chuck took a victory lap yesterday. Poor baby. But it’s the truth, as Josh Marshall points out in listing all the priorities of the Trump budget that Donald lost:

The EPA was slated for massive cuts – roughly 31%. It will retain 99% of its funding. Trump demanded funding for his border wall. He didn’t get any. Trump wanted to cut funding for the National Institutes of Health. It’s getting $2 billion of additional funding. Funding is included for the Obamacare subsidies Trump has threatened not to pay. There’s no provision for “defunding Planned Parenthood.” There’s no language to defund “sanctuary cities.” There are obviously many other things included in the bill. And it’s not like Trump got nothing. But at least on most of the hot button issues he’s pushed as part of his agenda he folded like a cheap suit. Yes, that’s a cliche. But he folded so bad, it’s really okay. Trump’s first mini-budget is largely a continuation of Obama’s last budget.

And now Rush Limbaugh is genuinely asking why anyone votes Republican? I don’t know, Rush. I don’t know. Maybe it’s the racism.

Donald Trump tweeted that “our country needs a good shutdown.”   I guess he doesn’t know that he can shut down the government this week if he really wants to by vetoing the spending bill heading to his desk soon.  Go ahead Donald.  I dare you.  See what happens.

You saw the Jimmy Kimmel video yesterday.  If you didn’t, watch here.

Well said, Jimmy. That's exactly why we fought so hard for the ACA, and why we need to protect it for kids like Billy. And congratulations! https://t.co/77F8rZrD3P

“The congressional GOP’s protracted efforts to repeal Obamacare could exact a heavy toll on the rest of Donald Trump’s legislative agenda,” Politico reports.

“If repeal in the House is successful, action on some of the president’s top legislative priorities is expected to be pushed back to late this year or even next year, when lawmakers will be up for reelection and more reluctant to cast tough votes. The delay also threatens to sap whatever Republican momentum remains from the election, in the midst of what’s often the most prolific stretch of a new presidency.”

“Tax reform is the most prominent issue expected to be put on the back burner. But lawmakers haven’t even begun discussing Trump’s trillion-dollar infrastructure proposal. And the GOP’s long-held vow to get its appropriations process in order looks like a lost cause.”

Harry Enten: “President Trump stormed into the White House thanks, in part, to working-class voters. Well, that was the conventional wisdom, in any case (there’s some debate over how big a factor economic anxiety actually was). But whatever working-class support Trump has, the Republican push to overhaul U.S. health care is putting it in peril.”

“The American Health Care Act, which may come up for a vote in the House this week (or not), appears to divide the Republican base along income lines. More specifically, Trump’s backing of the AHCA — and the renewed GOP effort to pass the bill — could eat away at the president’s support among lower-income Americans who otherwise like the job Trump is doing.”

David Graham in The Atlantic points out that Trump reverts to the campaign trail when his agenda stalls, but that campaign act is wearing thin: “It’s unsurprising that Trump would wish to return to the campaign—not yet constrained by office, he was free to say and do more or less as he chose, and it culminated in the great moment of his life: his election as president of the United States. Things haven’t gotten quite so well since. His approval rating has tanked, he has spoken frankly in interviews about how unexpectedly hard the job turns out to be, and how little has has to show for it. Trump’s problem is that he faces a vicious cycle: The more his presidency feels stalled, the more he reverts to his campaign mode. And the more he reverts to campaign mode, the less influence and attention he seems able to garner.”