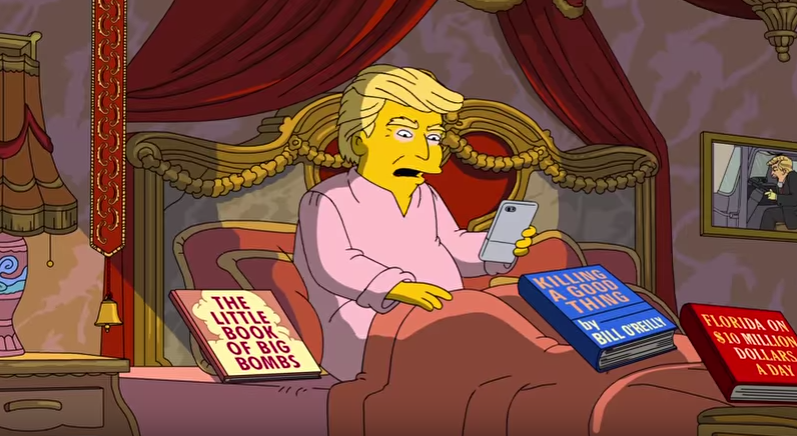 The House passed a one-week spending bill Friday morning, 382 to 30, with 207 Republican votes and 175 Democratic votes, meaning the Democrats were necessary to keep this government afloat. Again. That’s despite the declaration by Republican leadership that they would have the votes to do it all on their own. After holding the vote open for nearly an hour, they gave up on getting those last 15 Republicans on board and gaveled the vote.

It’s significant because it means that House Speaker Paul Ryan—and Senate Majority Leader Mitch McConnell—are going to need Democratic votes for the long-term spending bill. And that means nothing gets put into the budget that we Democrats disapprove of.

The story of Trump's 100 days is a president and his party refusing to come to grips with his illegitimacy https://t.co/BrPJjxawGE pic.twitter.com/0XOJhbnMad

See those colored US Maps there on his desk?   From President Trump’s interview with Reuters:  “More than five months after his victory and two days shy of the 100-day mark of his presidency, the election is still on Trump’s mind. Midway through a discussion about Chinese President Xi Jinping, the president paused to hand out copies of what he said were the latest figures from the 2016 electoral map.

“Here, you can take that, that’s the final map of the numbers,” the Republican president said from his desk in the Oval Office, handing out maps of the United States with areas he won marked in red. “It’s pretty good, right? The red is obviously us.”

Sometime in 2021, after he has been booted from the White House, he will still be talking about the 2016 electoral college.

Washington Post: “Trump has been in office for 99 days. As of our latest update on day 98, we’ve counted 452 false or misleading claims.”

Trump: I thought being president "would be easier" https://t.co/z85bW1VV2H pic.twitter.com/aSSQ7Cyots

Former President Obama hailed the political resilience of his signature health care law at a private event, pointing out that Obamacare is now more popular than his successor trying to repeal it: President Donald Trump, CNN reports.

“Obama also predicted that it will be challenging for Trump and fellow Republicans to make any sweeping changes to a law that now provides health insurance for so many people, as he remarked how difficult it was for him to get Obamacare enacted into law in 2009.”

A new CNN/ORC poll finds 50% of American voters would vote for the Democratic candidate for Congress while 41% would choose the Republican candidate if the election were held today.  “A lead that large, this far out, is not necessarily predictive, however — although it approaches the edge Democrats held early on in the 2006 election cycle when they won control of the House.”

It’s time for Bernie to go on a much needed vacation.  He is just embarrassing himself now.

Ohio Gov. John Kasich (R) said that he’s opposed to the House Republican plan to repeal and replace Obamacare, the Washington Examiner reports.  Said Kasich: “I wouldn’t be surprised if they pass something, but I’m not for it.”  Of President Trump, he added: “I happen to believe he doesn’t really care what the plan is.”

David Nather: “Take it for what it’s worth — this is coming from one of Trump’s former rivals. But Kasich still has a high profile in the GOP, and the more Congressional Republicans struggle to repeal the Affordable Care Act, the more likely it is that other Republicans could suggest it’s time to try something else.”

Frank Rich says the failure of Trump’s first 100 days is a win for America: “It’s good news that Trump thinks governing is as easy as picking up a phone and calling room service at a Trump hotel. The more lazy, ineffectual, and incompetent he is, the less damage he can inflict. The most patriotic act he can perform is to play more golf. But in some ways the young Trump administration is nonetheless a roaring success. For all the attention paid to the president’s historically low standing in the polls, he has nonetheless held on to a unified, intractable base that thinks he’s doing fine. Trump’s approval number in the Washington Post-ABC News survey released this week, 42 percent, may be dismal, but his approval rating among his own voters is 94 percent. Only 2 percent of those who voted for Trump in November regret doing so — even as he shows no sign of creating jobs with a trillion-dollar infrastructure program but every determination to gut those voters’ health care. He could still pull out a gun and shoot someone on Fifth Avenue without losing any of his faithful. […]”

“I know people who claim they can turn Trump off and tune him out, and I congratulate them on their self-discipline and mental health. For the rest of us, living through the chaotic first hundred days of his presidency has often felt like standing under an enormous fire hose raining down a nonstop deluge of raw sewage.”

The Commerce Department said the U.S. economy barely grew in the first quarter of 2017, expanding at an annual rate of only 0.7 percent.

New York Times: “The first-quarter performance upset expectations for a Trump bump at the start of 2017. The economy’s weakness reflected new caution among consumers. Other sectors like housing and business investment turned in a stronger showing, but not enough to offset factors like weaker retail sales.”

Associated Press: “The slowdown primarily reflected slower consumer spending, which grew by just 0.3 percent. That was the poorest showing in more than seven years.”

Matthew Yglesias: “Yet since his ascension to the White House, conventional wisdom has developed an odd tendency to describe his inability to make major legislative changes as an indication that his presidency is failing. It’s certainly true that Paul Ryan’s speakership of the House is failing, arguable that Mitch McConnell’s tenure as majority leader of the Senate is failing, and indisputably true that the Koch brothers’ drive to infuse hardcore libertarian ideological zeal into the GOP is failing.”

“But Trump isn’t failing. He and his family appear to be making money hand over fist. It’s a spectacle the likes of which we’ve never seen in the United States, and while it may end in disaster for the Trumps someday, for now it shows no real sign of failure.”

Progressives should care about what he says in the speeches he is being paid for.   If it is something like “you know, Trump is right, Obamacare sucks, and I hate single payer,” then Progressives might have a leg to stand on.  But getting paid to tell Wall Street that health care is a right for all Americans, that’s not outrageous.  In fact, it is pretty genius.

Michael Warren: “The decisions he makes are by and of the moment, with his aides and staffers and supporters racing to fit them into a message and a policy… It’s not unusual for a new administration to have problems with disarray or confusion. The beginning of a term is when the president is the strongest politically, but the weakest operationally. Staffing takes time and vetting, and political appointees have to learn to get along with career bureaucrats. The job of the president—the biggest job in the world—takes some getting used to.”

“But the Trump presidency is unique in how this early disorder is defined and shaped by the tendencies of the principal at the top.”

Dan Balz: “When Trump won his surprise victory in November, one big question was how he would govern. The answer, with some caveats, is that he has governed as he campaigned — unconventionally, unpredictably, in constant motion and unbowed in the face of criticism.”