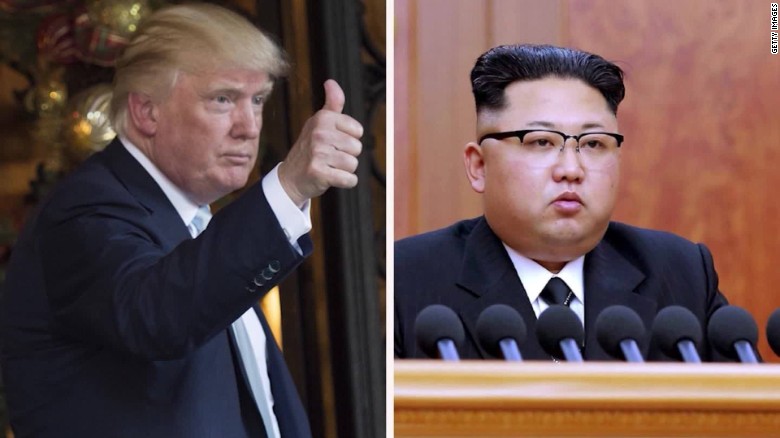 That is not all he said.  In the same interview, he said he admires Kim Jong Un.   “He’s 27 years old.  His father dies, took over a regime. So say what you want, but that is not easy, especially at that age.”

Left unsaid “Look at me, I am 70 and am a freaking disaster.”   Seriously, what is with Trump’s admiration of authoritarians?

“Senate Democrats are exploring a lawsuit against President Trump on the grounds that his vast business empire has created conflicts of interest that violate the Constitution,” The Hill reports.

“The effort is being led by Sen. Richard Blumenthal (D-CT), who has had preliminary discussions with several senators about the idea.”

This Chaffetz letter about General Flynn is a must-read. pic.twitter.com/HZca83URav

Former first lady Michelle Obama said she would never run for political office because she “wouldn’t ask my children to do this again,” CNN reports.  Said Obama: “It’s good to not have the weight of the world upon your shoulders.”

Told you.  Just because Hillary Clinton ran for office doesn’t mean Michelle Obama was going to.  You have to want it.

“The tide is quickly turning against the new Obamacare repeal legislation,” The Hill reports.

“At least 21 Republicans have said they would vote no on the revised GOP healthcare bill negotiated by centrist Rep. Tom MacArthur (R-NJ) and conservative Rep. Mark Meadows (R-NC)… Twenty-three GOP defections would be enough to kill House Republicans’ Obamacare repeal-and-replacement plan, assuming every House Democrat votes against it.”

Washington Post:  “Despite pressure from the White House, House GOP leaders determined Thursday night that they don’t have the votes to pass a rewrite of the Affordable Care Act and will not seek to put their proposal on the floor on Friday.”

Trump’s successful "project to obliterate shared agreement on the legitimate institutional role of the media.” https://t.co/njVFZqL7yD

Said one senior GOP aide: “It’s not tax reform. Not even close.”

Mexican lawmaker: “In front of a bluffer, you always have to maintain a firm and dignified position.” https://t.co/rA41WXStGm

“University of Wisconsin students who disrupt speeches and demonstrations could be expelled and campuses would have to remain neutral on public issue under a bill Republican legislators are pushing this week,” the AP reports.

“The bill comes as free speech issues have grown more contentious on college campuses across the country. Conservatives are worried that right-wing speakers aren’t given equal treatment as liberal campus presenters and some students have complained about free expression fanning racial tensions.”

Now this is a Freedom of Speech violation.  The University of Wisconsin is a state owned institution.  The state cannot regulate speech in this manner.

Financial Times: “Sitting across from Donald Trump in the Oval Office, my eyes are drawn to a little red button on a box that sits on his desk. ‘This isn’t the nuclear button, is it?’ I joke, pointing. ‘No, no, everyone thinks it is,’ Trump says … before leaning over and pressing it to order some Cokes. ‘Everyone does get a little nervous when I press that button.’”

Boston Globe: “On Tuesday, New Hampshire state Rep. Robert Fisher (R) was unmasked as an architect of a men’s rights Web page where he is accused of strategizing about how to seduce women in an age of feminism and denounced claims of rape as false.”

“On Wednesday, he rejected calls to resign, blamed fake news, and held himself out as a symbol of the downtrodden man.”

Said Fisher: “Here’s my message to the public: I am not disappearing. I will continue to stand strong for men’s rights and the rights of all.”

James Hohmann: “The pressure is suddenly on the Speaker, not the president, to convince potentially vulnerable members to walk the plank for an unpopular bill that’s still going to be dead on arrival in the Senate. Such a vote which could also cost some their seats next November. It will be the guys in the Tuesday Group, not the Freedom Caucus, who get swept out in a 2018 wave because they tend to come from more purple districts. Many are balking, but still undecided, about the revised proposal.”

“A lot of Ryan allies are exasperated by the Trump push to rush a vote before the week is over. There are even rumors of scheduling one for Saturday – to coincide with Trump’s 100th day. (This seems unlikely.) But it was a similar fixation on optics over substance that prompted Trump to demand a now-or-never repeal vote last month that would coincide with the seventh anniversary of the Affordable Care Act being signed into law.”

“This is part of an emerging pattern. Trump has repeatedly set up the Speaker to be the fall guy by making unrealistic demands and sticking with infeasible promises. Once again, the burden is falling on Ryan to either make them happen or explain why they didn’t.”

Tom Nichols: “The wide disagreement among Americans on the president’s performance, however, is more than partisanship. It is a matter of political literacy. The fact of the matter is that too many Trump supporters do not hold the president responsible for his mistakes or erratic behavior because they are incapable of recognizing them as mistakes. They lack the foundational knowledge and basic political engagement required to know the difference between facts and errors, or even between truth and lies.”

“There is a more disturbing possibility here than pure ignorance: that voters not only do not understand these issues, but also that they simply do not care about them. As his supporters like to point out, Trump makes the right enemies, and that’s enough for them. Journalists, scientists, policy wonks — as long as “the elites” are upset, Trump’s voters assume that the administration is doing something right.”

“There is a serious danger to American democracy in all this. When voters choose ill-informed grudges and diffuse resentment over the public good, a republic becomes unsustainable.”