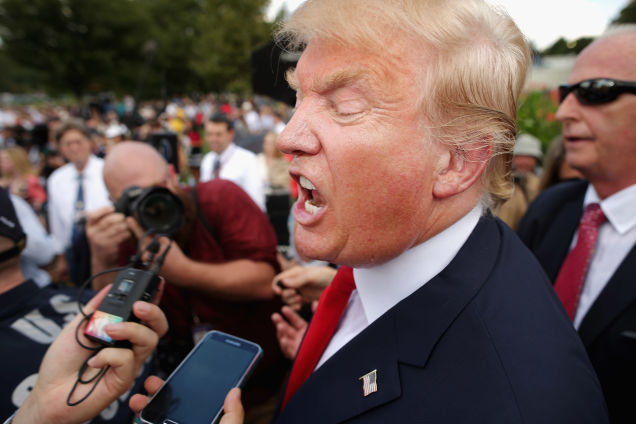 Donald Trump, the weak bluffer in chief who always backs down.

“The White House has told lawmakers that it will continue paying Affordable Care Act cost-sharing subsidies, removing the biggest remaining hurdle in the negotiations to avoid a government shutdown,” Politico reports.

The Hill: “The move marks something of a shift for President Trump, who had threatened earlier this month to withhold the subsidies — known as cost-sharing reductions — as a way move Democrats to negotiate on a healthcare overhaul. But the issue had threatened to derail the ongoing talks on government funding legislation that Congress must act on this week.”

Yesterday, word leaked out that the President was going to pull out of NAFTA by Executive Order (which is of questionable constitutionality since NAFTA was an Act of Congress).  Then late on Wednesday the the White House said Trump told his Canadian and Mexican counterparts that he does not intend to pull out of NAFTA after all.    Now, if the threat to terminate NAFTA was a negotiating tactic, wouldn’t you keep that threat on the table until you extracted some concessions?

As the 100-day mark of Donald Trump’s presidency approaches, a new CNN/ORC poll finds the President reaches this milestone holding on to the lowest approval rating of any newly-elected president at this stage.  Overall, 44% say they approve of Trump’s handling of the presidency, 54% disapprove.

The promised Trump tax plan, as distributed to press moments ago: pic.twitter.com/WVWhpPAZp0

Why does every proposal released by the Trump White House look like it was written by a senior in high school experimenting with new crazy fonts and formats in Microsoft Word?

Politico: “The indelible takeaway from those first 100 days is that Trump’s assault on political norms has continued. In fact, he has violated Washington norms so casually and constantly that his norm-breaking is becoming normalized. That shattering of protocol and expectations may turn out to be more consequential than any of his massive policy promises or modest policy achievements to date.”

First Read: “The GOP plan to pass any tax cut through Congress is to use reconciliation to prevent a Democratic filibuster against the legislation, so that it will need just 51 Senate votes instead of 60. But that means, with a 52-48 majority, there’s little margin for error. And by the way, using reconciliation presents its own challenges — due to the rule that it can’t increase deficits beyond a 10-year budget window. That’s why the Bush tax cuts expired after 10 years.”

However, as the Wall Street Journal notes, “Even a temporary tax cut in the corporate tax rate as short as three years might cost the government revenue beyond 10 years and run afoul of those reconciliation rules. Lower rates mean that businesses will use fewer tax credits… As a result, they will carry those credits forward and reduce revenues in future years.”

A North Carolina prosecutor said he will not bring voter-fraud charges against a woman who said she cast an illegal vote for Donald Trump last year to fulfill her mother’s dying wish, the Charlotte Observer reports.  Rick Hasen: “You can bet that if this were an African-American woman voting for Clinton, the DA would have prosecuted or been called ‘soft’ on voter fraud.”

“GOP House members came out of a conference meeting Wednesday morning still optimistic about a health care vote next week, provided the deal-making amendment gets fixed to subject Congress to the same Affordable Care Act regulation waivers as everyone else,” Axios reports.  “It’s still unclear whether there are still enough moderate holdouts to block the bill.”  There are roughly 50 members of this “moderate” Tuesday Group of Republicans (dumbest name ever).   And they are faced with this choice:

And it is a vote with no actual consequence since Trumpcare has no chance of passing the Senate.

Playbook: “Yes, President Donald Trump is releasing his outlines for tax reform today. But let’s be honest: what he is releasing today will not bear much resemblance to anything that might pass in the coming year.”

“We were up on Capitol Hill and worked our White House sources yesterday, and they all see this not as a line in the sand or as a serious proposal, but as an opportunity to get the conversation started. No, Congress won’t be able to lower corporate and passthrough tax rates to 15 percent. The professionals in the White House realize this — and also realize that they’re beginning to irk Capitol Hill committees by releasing this. Without some corresponding way of paying for such low rates, these rates would blow a massive hole in the deficit. But it reflects a White House itching for action. (That explains their push for a health care vote this week.) And insiders say unlike health care reform, Trump is more personally invested in making sure something happens on tax reform.”

Ben Smith says the Swamp is winning: “As the Trump administration scrambles to list the accomplishments of Donald Trump’s first hundred days, an awkward fact is becoming clear: To the extent that they have much to brag about, it’s because they’ve turned important roles and projects over to the swamp-dwelling Washington insiders Trump campaigned against.”

“Trump’s clearest major accomplishment is also the purest example of this trend: The appointment of Neil Gorsuch to the Supreme Court was a masterpiece of insider politics, steered by the longtime master of Washington conservative judicial politics Leonard Leo and guided through the Senate by the most Washington of Washington strategists, Ron Bonjean.”

“The nomination process was as slick as virtually everything else Trump touched was messy: Well-researched and coordinated, with an array of conservative groups feeding and sparring with the media and with Democrats. It was characterized by aggression and spin, but not overt lying or massive bumbles. And while it was hardly a rogue operation — Bonjean is close to White House Press Secretary Sean Spicer — it was like an alternate universe from the chaos reporters are accustomed to coming out of Pennsylvania Avenue.”

Dean Pagani on bullies:  “Being a bully can work in the short term, but it is not a strategy that sustains. If you care what people think of you, if you care about how your obituary will read, or how you will be remembered by history, being a jerk is not a leadership model.

The New York Times began the past week with a whither Chris Christie profile in which Christie admitted things have not turned out as planned. America was never convinced of his greatness. America never even considered the possibility. By the end of the week another great bully of American public affairs had fallen. Fox News personality Bill O’Reilly was forced to resign after his victims broke their silence and revealed the fraud behind the public persona — a persona created and protected by Roger Ailes, who was felled by his own similar behavior last year.

These three cases should serve as a warning to our current bully in chief, the president of the United States, because Donald Trump has been friendly with all three men. Like Christie, there is a reason Trump’s approval ratings have plunged toward the 30’s. It doesn’t take long for voters to realize there is a difference between looking tough on the campaign trail and an over reliance on threats and brute force once you have the responsibility to lead. Governing is collaborative and collaboration can not begin with demands backed only by threat of force. Your ideas need merit greater than the perceived strength of the office you hold.”

Democrats must promise to investigate every Trump scandal, even if it takes decades: https://t.co/dapjdFnRul

Paul Waldman at The Week explains why Trump is so bad at negotiating:  “As a businessman, Trump’s dealmaking was built on a particular commodity: his celebrity. He understood early on that if he created a public image of wealth and glamour, then people would want to get a taste of it by associating themselves with him. He could use that public image to get loans that he might not repay, get partners in real estate projects, get developers to license his name for their own hotels and resorts, and get people to sign up for a scam university. If one deal fell through, there would always be someone else who wanted the Trump name to rub off on them. Because he could walk away and find a different mark — er, partner — he could negotiate from a position of strength.

But now Trump is in a very different situation. He has only one group of potential partners — 535 of them — and he has to keep convincing them to go along with him. Not only that, at times he’ll even need the help of Democrats, who despise him and everything he stands for. Winning them over will require skill and subtlety. And Donald Trump is not a subtle man.”