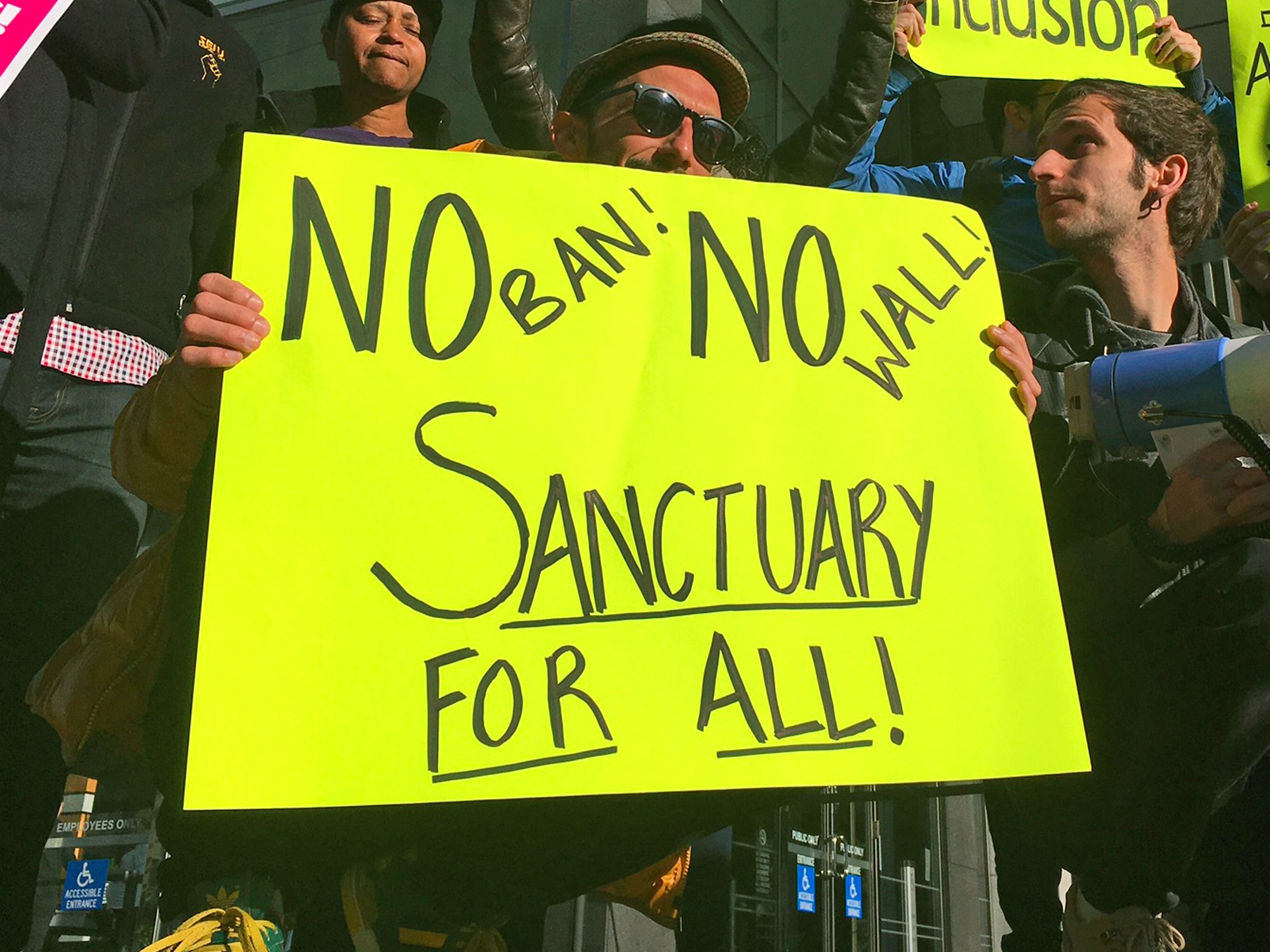 A federal judge blocked the Trump administration from enforcing a threat to deny funds to sanctuary cities — the latest blow from the federal judiciary to the President’s immigration agenda.   In a ruling delivered Tuesday, Judge William H. Orrick sided with Santa Clara, the city of San Francisco and other cities, who argued that a threat to withhold federal funds from cities that do not cooperate with some federal immigration enforcement could be unconstitutional.

In granting a nationwide injunction, Orrick blocked the government from enforcing a key portion of Trump’s January executive order on immigration, which ordered the Department of Homeland Security and Justice Department to block cities who do not cooperate with federal immigration enforcement from receiving federal funds.

While Orrick’s ruling does not find the policy unconstitutional, he did find that the counties and cities that challenged the law demonstrated they could face “immediate irreparable harm” if the policy were allowed to be put into place, and that their constitutional challenge could succeed once the case is fully heard.

6. Here's my argument that Trump's greatest successes have been what looks like his failures: https://t.co/vIPbtOdvst

President Trump’s former national security adviser did not properly disclose payments from Russia and does not appear to have complied with the law, House oversight leaders said Tuesday after reviewing Michael Flynn’s application for a security clearance.

“As a former military officer, you simply cannot take money from Russia, Turkey or anybody else. And it appears as if he did take that money. It was inappropriate. And there are repercussions for the violation of law,” House Oversight Chairman Jason Chaffetz said.

And the obstruction of justice continues.

“White House officials and several Republican lawmakers claimed Tuesday they were nearing a deal on health-care legislation with the House Freedom Caucus, with at least three leading figures in the hard-line group ready to support an overhaul after the dramatic collapse of talks last month,” the Washington Post reports.

“A top aide to House Speaker Paul D. Ryan (R-WI) said he ‘hasn’t ruled out’ a vote on a health-care bill this week, but that his top priority is passing a spending measure to keep the government funded. If consensus on health-care were reached, the House could move quickly however.”

Axios: “Several members of the House Freedom Caucus have flipped their votes to yes on a modified health care bill that could potentially come up for a vote next week.”

BUT, the moderates don’t seem to be on board.  Rep. Charlie Dent (R-PA), leader of the centrist Tuesday Group, told the Washington Examiner that he still opposes the House Republican healthcare repeal bill, saying that a proposed compromise does not address his key concerns.  Said Dent: “Based on what I’ve read, it does not change my position. I was a no, and I remain a no.”

Edifice taken down in N.O. really a monument to racist account of Reconstruction. https://t.co/6TliLHrqGv

All Confederate monuments everywhere must be torn down and the Stars and Bars must be declared illegal as the Nazi Swastika Flag was declared illegal in Germany.  It should be considered an act of treason to fly or display it.

“Americans’ support for immigration and free trade hit record highs in a new Wall Street Journal/NBC News survey, just three months after the inauguration of a president who pledged to curtail both.”

“Six in 10 Americans said immigration helps the nation more than it hurts—up 6 points since the last sounding, in September 2016…. Support for free trade rose slightly in the latest survey, with 57% saying it is beneficial for the U.S. and 37% saying it isn’t—a gap of 20 points, and a record level of support.”

Meanwhile, a new Politico-Harvard T.H. Chan School of Public Health poll finds 60% of the general public said they want President Trump and Republican lawmakers to work with Democrats to fix Obamacare or move on to other issues.

“But just as many Republicans, who have been promised by their party for years that the health law would be dismantled, said Trump and Congress shouldn’t give up the effort to repeal or replace Obamacare.”

Stuart Rothenberg: “If 2016 was a realignment, it was a shallow one. Yes, the Republican presidential nominee carried Wisconsin and Pennsylvania, but the margins were extremely narrow: just over 44,000 votes out of over 6 million cast in Pennsylvania and under 23,000 out of almost 3 million in Wisconsin.”

“Still, realignments in Wisconsin and Pennsylvania (to say nothing about competitive states like Ohio and Iowa), particularly around cultural issues, could affect near-term elections, including next year’s midterms and the 2020 presidential election.”

“Count me as skeptical that the statewide shifts in both states are large enough and long-lasting enough to constitute partisan realignments. But the 2018 and 2020 elections should give us a better handle on what, if anything, has happened in both states.”

“Workers at a factory in China used by the company that makes clothing for Ivanka Trump’s fashion line and other brands worked nearly 60 hours a week to earn wages of little more than $62 a week,” the Washington Post reports.

“The factory’s 80 workers knit clothes for the contractor, G-III Apparel Group, which has held the exclusive license to make the Ivanka Trump brand’s $158 dresses, $79 blouses and other clothes since 2012.”

Playbook: “The White House yesterday sent out the message that they planned to cut the corporate tax rate to 15 percent — fulfilling a campaign-season promise. Is this an opening negotiating position or what Trump wants to achieve? We don’t know, because we haven’t seen him in a successful legislative negotiation yet.”

“But privately, Capitol Hill Republicans are seething. Why? Because a 15 percent corporate rate is practically impossible to achieve without blowing a hole in the budget. The president might be willing to balloon the national deficit, but Hill Republicans — which have made debts and deficits their central issue over the last decade — are not. To make a cut like that permanent, Republicans would need Democratic votes in the Senate, because it would run afoul of reconciliation rules. Speaker Paul Ryan and House Republicans raise $1 trillion in new cash with the border-adjustment tax, and they can only get the corporate rate down to 20 percent. Trump is signaling he has no interest in the so-called BAT.”

No action Trump has taken to date would personally enrich him and his family nearly as much as this https://t.co/kSehzQFyVb

Mexico’s foreign relations secretary called President Trump’s plan to build a border wall an “unfriendly, hostile” act, adding that it is a “bad idea” that will not accomplish anything, the AP reports.

And while Trump has repeatedly asserted that he will get the U.S.’s neighbor to pay for the wall, Foreign Secretary Luis Videgaray repeated that Mexico won’t pay a cent for it.

Ed O’Keefe reports “Here’s how congressional Democrats plan to mark Trump’s first 100 days” at PowerPost, and notes “While negotiating this week with the White House on a plan to avoid a government shutdown and strongly opposed to any new plan to repeal the Affordable Care Act, Senate Minority Leader Charles E. Schumer (D-N.Y.) and House Minority Leader Nancy Pelosi (D-Calif.) are planning to lead a series of events designed to call out Trump’s work and words on the economy, trade, health-care reform and his vows to “drain the swamp” in Washington. The offensive begins Monday with a conference call hosted by Schumer, Pelosi and Tom Perez, the chairman of the Democratic National Committee, and will continue with other events hosted by lawmakers throughout the week…Democrats are planning for events on Capitol Hill headlined by rank-and-file lawmakers who will release scorecards designed to criticize the new administration’s work on the economy, trade, health care and ethics. Schumer and Pelosi will cap the week on Friday with another event designed to draw attention to the looming shutdown. Their offices will be circulating talking points and social media guidance to House and Senate offices each day — the kind of material likely to end up in floor speeches and members’ Twitter feeds.”

Politico’s Heather Caygle writes about the rising spirit of optimism among Democratic leaders and activists: “House Democrats are heading toward the 100th day of Donald Trump’s presidency with the kind of feel-good unity they haven’t experienced since the election. Coming off a rowdy recess where Republicans continued to be skewered by constituents on everything from health care to Russia to Trump’s tax returns, Democrats say walking through the political wilderness isn’t so bad — at least for now…It’s a stunning reversal from the despair dominating the caucus just a few months ago when Trump entered the White House and Republicans seemed poised to wreak havoc on Democratic priorities…Now, some members are even talking openly about the possibility of taking back the House in 2018. They would need to pick up two dozen seats, an uphill battle to say the least. But the chatter speaks to the optimism the caucus is feeling.”

At The Plum Line, Greg Sargent shares some thoughts on the future of the Democratic Party, including: “Clinton rolled out a detailed political reform agenda, but it’s not clear whether she conveyed a gut sense that she really wanted to shake things up. As one Democrat sighed to me in August: I wish Clinton would show more discomfort with our political system and with how business is done in Washington…This possibility — that Clinton did not show a gut level of discomfort with our current arrangements — is worth mulling. Trump’s numbers were even worse than Clinton’s on honesty, and his promises to bust up the system were crude and laughably absurd — he actually argued that he was well qualified to reform our corrupt system because he had milked it himself from the inside to great effect. But it’s worth asking whether he somehow conveyed a visceral disdain for the way business is done in Washington that Clinton simply did not… The polling evidence is mixed on whether Clinton’s economic message even failed — exit polls showed she won among voters most concerned about the economy in many swing states. Clinton won the popular vote by nearly 3 million votes, and her extremely close losses in multiple states might not have happened if turnout had shaped up differently even on the margins.”