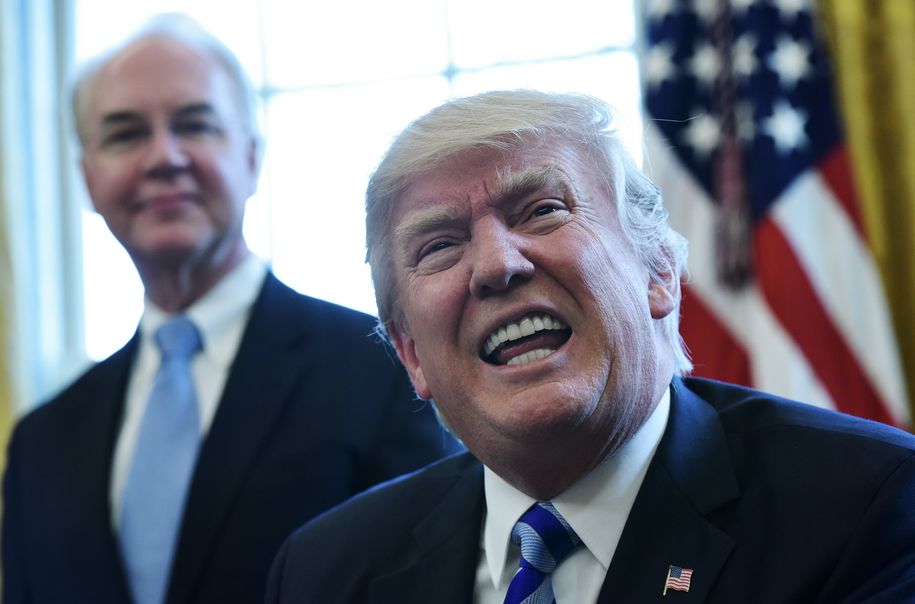 “Nearly three-quarters of Americans disapprove of Congress’s job performance, up 12 percentage points since February… Just one-fifth said they approve of the job Congress is doing, a drop of 9 points.”

“Ryan is one focus of growing dissatisfaction, with 40% saying they view the House speaker negatively, compared with 22% who had a positive view—an 18-point gap. In February, unfavorable opinions outweighed positive ones by just 1 point.”

Here @brianbeutler suggests gov't shutdown could result from Trump's lack of any grasp of realities of leverage: https://t.co/CbMJ0GTj57

Wall Street Journal: “During a meeting inside the Oval Office last week, Mr. Trump told staff he wants a massive tax cut to sell to the American people, the person said. It was less important to him if the plan loses revenue. Mr. Trump told his team to ‘get it done,’ in time to release a plan by Wednesday.”

I actually felt my blood pressure drop upon hearing his voice again.  Man, a President who can speak in complete sentences and paragraphs, who knew what a luxury that was?

In an appearance at the University of Chicago on Monday, former President Barack Obama unloaded a relentless barrage of complete sentences in what was widely seen as a brutal attack on his successor, Donald Trump.

Appearing at his first public event since leaving office, Obama fired off a punishing fusillade of grammatically correct sentences, the likes of which the American people have not heard from the White House since he departed.

“He totally restricted his speech to complete sentences,” Tracy Klugian, a student at the event, said. “It was the most vicious takedown of Trump I’d ever seen.”

Fox & Friends news anchor Heather Nauert was officially announced as the next spokeswoman for the U.S. State Department, the Daily Beast reports, making Fox News’ role as the official propaganda channel of the Republican government all the more official.

“During the controversy over Nordstrom dropping Ivanka Trump’s clothing line, Nauert tweeted out her support for the brand in spite of ‘liberal pressure,’ and included a photograph of herself wearing the brand’s items.”

Bulk of Trump's accomplishments listed in memo made through exec action — something GOP blasted Obama for doing… https://t.co/HuCZBNuTaU

A new NBC News/Wall Street Journal poll finds that 73% of Americans want an independent, non-partisan commission instead of Congress to investigate Russia’s involvement in the 2016 election.

Also striking: 61% say they have little to no confidence in Congress conducting a fair and impartial investigation into Russia’s involvement in the 2016 election.

Why Trump wants yuge tax cuts for the rich, and why Congress will pass them https://t.co/wBlym9zJrk pic.twitter.com/SaV5EfGJHd

David Frum: “Obamacare remains the law of the land. So does NAFTA. Tax reform exists only as pixels in a tweet. Infrastructure ain’t happening. Five months after the Republicans won united control of Congress and the presidency, it seems uncertain whether one-party Washington can avoid a government shutdown over a budget dispute.”

“Yet as Day 100 of his presidency nears, President Donald Trump can take credit for one huge accomplishment, an accomplishment more central to his election campaign than any of the unfulfilled pledges above. Illegal immigration into the United States has slowed dramatically. The Department of Homeland Security reports that illegal crossings across the southern border plunged 40 percent in the first month of the Trump presidency, the steepest decline in illegal migration since the recession of 2009. Illegal immigration by family groups with children has dropped by over 90 percent.”

Donald Trump is obsessed with winning, and that's why he's losing https://t.co/ugvLkpgbuf

Rebecca Traister takes Bernie Sanders to task on the issue of reproductive rights for women. But here’s the kicker:

In the midst of one of the most activated, energized, ground-up movements in modern Democratic political history — where the energy is coming from women who remain underrepresented in state and federal legislatures — the Unity Tour, with its two men making pronouncements about what the party should do next, felt exceedingly out of touch. And the dynamic — the women doing the labor of organizing and protesting and campaigning, knocking on doors and making calls and sending postcards, while guys speak from the microphones about the need to compromise on their rights — is depressingly retro.

“Open your eyes to where the resistance is really coming from,” Hogue urged on Thursday. “There are literally millions of women who have been pouring calls into Senate offices, House offices, going to town halls, filing to run for office; we are literally three months out from the largest protest in U.S. history that was overwhelmingly women, in the name of women; that’s where the resistance is. This is the Democratic party base. So why is the place to start negotiating the place that pulls the heart out of the resistance?”

Eric Levitz says Democrats are winning the first round of the 2018 Midterms.  Two words: Candidate Recruitment.

“Every midterm fight begins with recruitment. And the Democrats’ surprisingly strong showings in disparate corners of red America are making it harder for Republicans to field their preferred players.  […] Meanwhile, Democrats have more would-be candidates than they know what to do with. Vice News reports that 408 Democrats have already declared their intention to run for the House in 2018 — a 58 percent increase over the 259 who had declared by this point in the 2014 cycle […]

The surge in declared candidates should quell Democratic fears that the resistance’s many marchers would pursue street politics to the exclusion of electoral ones. […]  The more candidates that Democrats recruit in swing districts, the less interested vulnerable Republicans are going to be in reviving plans to throw millions of people off of their health insurance. And while moral victories are less sweet than electoral ones, policy wins are better than both.”

Trump and the media: Beneath the surface hostility, a deep and dangerous symbiosis https://t.co/iD1SiDffmC

President Trump announced his intention to hold a “big rally” in Pennsylvania next Saturday, a date which marks his 100th day in office, and coincides with the White House Correspondent’s Dinner—an event he previously declined to attend, CNBC reports.

Axios: “Holding a newsworthy rally the same night as the WHCD essentially forces White House reporters to either skip the annual event for the rally, or attend the dinner and risk the backlash for wearing fancy clothes, rubbing elbows with celebs, and laughing along with a comedian who has a history of ridiculing Trump.”