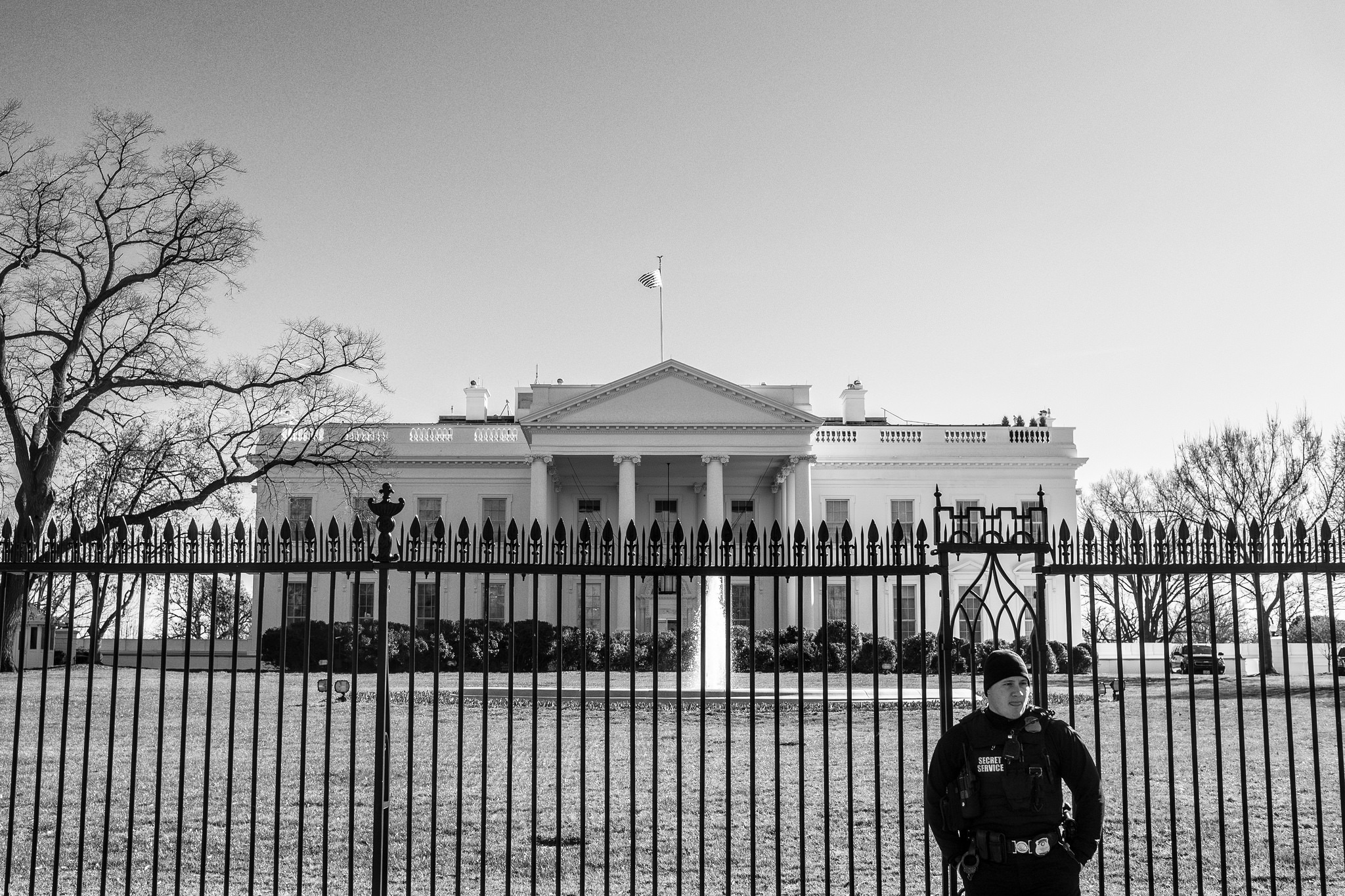 “The Trump Administration will not disclose logs of those who visit the White House complex, breaking with his predecessor,” Time reports.  “The decision, after nearly three months of speculation about the fate of the records, marks a dramatic from the Obama Administration’s voluntary disclosure of more than 6 million records during his presidency.”

“Under the Trump Administration’s directive, logs of those entering the White House complex will be kept secret until at least five years after Trump leaves office—at which point they will first be eligible to be requested by the public, press and scholars.”

Jonathan Chait: “The Bush presidency was the most comprehensive governing failure of any administration since at least Herbert Hoover, and it ought to have poisoned the party’s national brand as deeply as it did Hoover’s GOP (which did not win another presidential election for twenty years). But the Republican Party managed to largely skirt the reputational fallout from the Bush catastrophe. It did so, in part, through the tea party: Conservatives hailed right-wing protests against Barack Obama as a call for ideological purity, cleansing the supposed big-government, cronyist tendencies of the Bush administration. The Republican Party of the Obama era insisted it had learned the lessons of the Bush years, when its agenda had devolved into little more than shoveling cash to K Street. The post-Bush GOP was allegedly sadder and wiser and filled with righteous abhorrence for the temptations of lobbyists and deficit spending.”

“Those lessons have all been forgotten. The Republican government, under Trump, has retraced the steps it took under Bush — from the obsession with tax cuts for the rich, to the vanishing line between the party’s paid lobbyists and its public servants. The reality is that, contrary to the willful misreading of conservatives elites, the tea-party revolution was not fundamentally a reaction against deficits or crony capitalism: It was a heavily racialized backlash against social change. And that spirit — the true animating spirit of the grassroots right — has lived on in Trump’s presidency.”

Josh Marshall on the militant ignorance of Donald Trump:

Ignorance is just the first stage of Trump’s fairly advanced problem. He is not only ignorant but clearly unaware of his level of ignorance. This is compounded by a seeming inability to understand that everyone else isn’t equally ignorant to him. Those of us who are parents know the wonder of discovery experienced by small children. They find out there were things such as dinosaurs or close primate relatives called lemurs. As loving parents we indulge them, sometimes feigning ignorance of things we actually already knew to support a child’s joy in discovery.

But Donald Trump is a 70 year old man. And not a terribly nice man.

His ignorance is not endearing. We don’t need to lie to him to make him feel good about himself. Still it is good to understand his condition. Ignorance is just lack of information. But there’s something wrong with Trump’s brain – maybe cognitive, perhaps simple entitlement or just broad spectrum derp – which appears to make it genuinely impossible not to project his own ignorance onto everybody else.

A new Opinion Savvy poll in Georgia’s 6th congressional district finds Jon Ossoff (D) at 42% support — less than the 50% he needs to avoid a run off.  In hypothetical match ups with the leading Republicans in a run off, each race is within the margin of error.

Remember when Republicans pretended to be deeply concerned about the consequences of policy uncertainty? https://t.co/DCZGm4dZGv

“The U.S. is prepared to launch a preemptive strike with conventional weapons against North Korea should officials become convinced that North Korea is about to follow through with a nuclear weapons test,” multiple senior U.S. intelligence officials told NBC News.

“North Korea has warned that a ‘big event’ is near, and U.S. officials say signs point to a nuclear test that could come as early as this weekend.”

Meanwhile, the BBC reports North Korea has called on foreign residents in South Korea to consider evacuating because, it claims the situation on the Peninsula is “inching close to a thermonuclear war.”

New York Times: “Mr. Trump sometimes cloaks his evolving positions by declaring victory before retreating. For instance, he had criticized NATO for not fighting terrorism and leaving the financial burden to the United States. As he met with NATO’s secretary general on Wednesday, Mr. Trump asserted that the alliance had changed.”

“But the alliance has hardly changed in three months. Just three more members out of 28 have committed to raise military spending to target levels by next year, and the only shift in NATO’s approach to terrorism was to create a new intelligence office before Mr. Trump’s inauguration.”

Ben Schreckinger: “I asked friends and foes alike to imagine how, should Bannon get the boot, the pugnacious populist might exact his revenge.”

“Taken together, their suggestions amount to an epic, Kill Bill-style revenge saga that starts with Bannon leaking personal dirt on his enemies to the tabloids, using the megaphone of Breitbart News to exacerbate divisions inside the administration, and siccing an army of internet trolls on his adversaries to harass and defame them. It ends with Bannon using Cambridge Analytica data to identify and primary their vulnerable allies in Congress, then releasing a ‘Where Trump Went Wrong’ documentary on the eve of the November midterms and finally—in this revenge fantasy’s epic climax—running against Trump himself in 2020.”

How to fix the Supreme Court https://t.co/W68aiWhGPg

Andrew Sullivan: “You can try to argue that Trump has simply pivoted to the center, like so many other presidents before him. But the statements he has made in just the last six months, and the policies he has pursued for the last three, have gyrated so wildly, have so little consistency, and make so little sense that there is no assurance that in another three months, he won’t be back where he started, or somewhere even more clusterfucked.”

“What on earth is the point of trying to understand him when there is nothing to understand? Calling him a liar is true enough, but liars have some cognitive grip on reality, and he doesn’t. Liars remember what they have said before. His brain is a neural Etch A Sketch. He doesn’t speak, we realize; he emits random noises. He refuses to take responsibility for anything. He can accuse his predecessor and Obama’s national security adviser of crimes, and provide no evidence for either. He has no strategy beyond the next 24 hours, no guiding philosophy, no politics, no consistency at all — just whatever makes him feel good about himself this second. He therefore believes whatever bizarre nonfact he can instantly cook up in his addled head, or whatever the last person who spoke to him said. He makes Chauncey Gardiner look like Abraham Lincoln. Occam’s razor points us to the obvious: He has absolutely no idea what he’s doing. Which is reassuring and still terrifying all at once.”

Amy Walter: “Trump has actually had some wins. A conservative was just sworn into the Supreme Court. He’s rolled back or stopped a bunch of regulations. He’s given the green light to Keystone and Dakota Access pipeline. Illegal immigration is down at the border. So, why isn’t the media writing about those? One big reason: The White House itself. The ‘lamestream’ media would have much less to write about if the folks in the White House would stop talking to them. The latest Washington Post story about the White House infighting had 21 sources. 21! I’ve seen sieves with fewer holes than this White House.”

“The place has been described to me as Lord of the Flies. Forget about message discipline—these guys are literally fighting for their lives (ok, may not their actual lives but their jobs/influence).

“Trump’s chaotic approach worked in 2016 because the other candidate—while disciplined in her campaigning—was considered as unappealing as he was. Now, the spotlight is on him – all the time. And, the chaos thing isn’t working.”

President Trump rose to power on a combination of meanness, incoherence and falsehoods. His strategy depended almost entirely on playing off the unpopularity and weaknesses of others.

Every aspect of his approach has blown up on him since he took office, but as is always the case with Trump, he will not take any personal responsibility for what’s going wrong. He must find a scapegoat. The latest object of his opprobrium would seem to be Stephen K. Bannon, the chief White House strategist.

But dumping Bannon would only underscore the extent to which Trump is a political weather vane, gyrating wildly with the political winds. He’s “populist” one day, conventionally conservative the next and centrist the day after that. His implicit response is: Who cares? Let’s just get through another week.