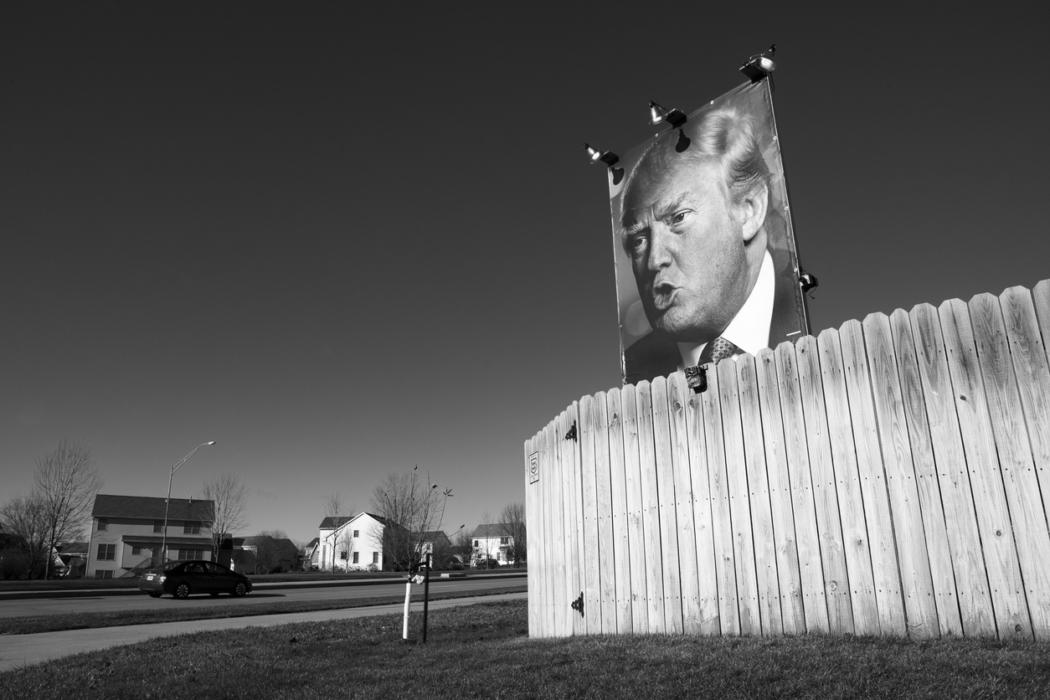 Josh Rogin: “The Trump administration’s strike on one of Bashar al-Assad’s air bases was similar in style and objectives to the strike plan that President Barack Obama prepared in 2013 — except that Obama’s attacks were to be several times bigger than President Trump’s. At the time, leading Republicans mocked the Obama administration for what it called ‘pinprick’ strikes, calling them ineffective. Today they praise Trump’s smaller strikes as perfectly calculated.”

Sorry to be immature here, but this kinda thing does matter to Trump: Trump, always smaller than Obama.   Smaller hands.  Smaller military strikes.

“K.T. McFarland has been asked to step down as deputy National Security Advisor to President Donald Trump after less than three months and will become U.S. ambassador to Singapore,” Bloomberg reports.

“The departure of the 65-year-old former Fox News commentator comes as Trump’s second National Security Advisor, Lt General H.R. McMaster, puts his own stamp on the National Security Council after taking over in February following the firing of Michael Flynn.”

James Rubin attempts to explain something the news channels seem to have missed.

While the limited missile strike was a commendable and overdue response to the use of chemical weapons and to countless other war crimes perpetrated by the regime in Damascus, the public performance of President Trump and his team throughout this tragic episode hardly inspires confidence. On the contrary, the administration demonstrated a dangerous degree of incoherence and inconsistency.

Consider the chronology. The debacle began with a remark by the new United States ambassador to the United Nations, Nikki Haley, in New York at the end of March. Despite a brutal six-year civil war in which Mr. Assad’s forces have been responsible for the deaths of about 200,000 civilians, and despite near universal opposition to his rule by leaders of the civilized world, Ms. Haley thought it was the right time to send a signal to Mr. Assad and his allies, Russia and Iran, that the new American president’s priority “is no longer to sit there and focus on getting Assad out.” Secretary of State Rex Tillerson confirmed this new view, which Sean Spicer, the White House spokesman, described as a simple recognition of “political reality.” Intentionally or not, American policy with respect to the world’s worst military and humanitarian crisis had been changed dramatically.

“Britain and America will this week directly accuse Russia of complicity in war crimes in Syria and demand that Vladimir Putin pull the rug from Bashar al-Assad’s blood-soaked regime,” the Times of London reports.

“Rex Tillerson — President Donald Trump’s secretary of state — will fly to Moscow to confront Russia with evidence that it had knowledge of, and sought to cover up, the regime’s deadly sarin strike last week that left 87 people dead.”

The evidence is now clear that the White House and Devin Nunes worked together to halt the Russia investigation: https://t.co/yJOJHf6gEM pic.twitter.com/1ZzVg9RCZD

Obstruction of Justice.  Expellable offense for Nunes and Impeachable for Trump.

Wall Street Journal: “There is, at some level, rhetorical room for agreement [on taxes]. Mr. Trump says middle-class tax cuts are a top priority. House Speaker Paul Ryan (R-WI) says he’s aiming for his plan to be revenue neutral—collecting as much money over the next decade as the current system does. Mix Mr. Trump’s class rhetoric, Mr. Ryan’s budgetary promise and the prospect of spending on infrastructure and there is a recipe for bipartisanship.”

“But so far, those priorities aren’t widely shared among Republicans and GOP plans haven’t matched them… House Republicans haven’t shown in detail how their plan adds up and don’t want to tie infrastructure and taxes together. Lower tax rates on businesses, investors and top earners are a unifying force in the GOP, and many lawmakers are reluctant to give that up to get a deal with Democrats.”

“Even if the White House and Democrats reach a conceptual agreement on taxes, any accord would drive many Republicans away and require the Trump administration and lawmakers to make decisions on hundreds of details.”

If Trump wants to golf every weekend, fine, but it's obscene how much his Mar-a-Lago trips are costing taxpayers. https://t.co/CQDsJXc6cY

“Democrats heard the argument throughout the Senate’s bitter debate over Neil Gorsuch: Don’t filibuster this Supreme Court nominee — save your leverage for President Trump’s next pick, the one who could change the court’s balance of power for a generation. But most Democrats decided that holding their fire this time would make no difference in the end,” Politico reports.

“Trump would choose the judges he wants, without regard to how Democrats might react, they concluded. And Majority Leader Mitch McConnell was intent on blowing up the filibuster for high court nominees, if not now, then next time in order to maintain the GOP’s grip on the court. His unprecedented blockade of Merrick Garland, Barack Obama’s Supreme Court nominee, made that clear, they believed.”

“So if Democrats were going to lose the filibuster regardless, best to go down swinging now on a nominee many found far too conservative — a move that would also please a liberal base still spoiling for a fight against Trump.”

One day, schoolchildren will say Mitch McConnell's name along with Joseph McCarthy as senators who committed evil. https://t.co/YMMiqcFVIw

In the past six years, more than 370,000 women have been screened for cervical cancer and 24,000 for breast cancer through Pink Ribbon Red Ribbon. More than 119,000 girls have been vaccinated against the human papillomavirus (HPV), which can lead to cervical and other cancers. Nearly 1,000 health workers have been trained. With the proper resources and international commitment, we could end cervical cancer deaths on the continent in 30 years.

Critical to this effort is our Pink Ribbon Red Ribbon partner, the President’s Emergency Plan for AIDS Relief (PEPFAR). My administration launched PEPFAR in 2003 to address the HIV/AIDS pandemic that threatened to wipe out an entire generation on the continent of Africa. Nearly 15 years later, the program has achieved remarkable results in the fight against disease. Today, because of the commitment of many foreign governments, investments by partners, the resilience of the African people and the generosity of the American people, nearly 12 million lives have been saved. And nearly 2 million babies have been born HIV-free to infected mothers.

The program is, of course, cut out of Donald Trump’s budget. Bush, like the rest of us, is reduced to hoping that Congress … this Congress … will do something sensible.

Great to spend time with @GeorgeHWBush & Mrs. Bush in Houston today. We caught up about kids, grandkids, old times and new times. And socks. pic.twitter.com/CshV6tI5Ae

“Republicans are becoming increasingly concerned about their ability to hang on to former Republican congressman Tom Price’s seat here in a wealthy, suburban district where restive Democratic energy has been surging since November’s election,” the Washington Post reports.

“The race will test Democrats’ strength in the kind of districts they need to win if they hope to retake the House in 2018 — mainly suburban areas that have become more demographically diverse.”

.@SenSanders: "Yes, we have to get rid of Assad…But we cannot do it unilaterally." #MTP pic.twitter.com/Vg5EZQNwSt

Bernie calling for regime change in Syria. Remember when all his supporters attacked Hillary for being a warmonger?  Those were fun days.

Wall Street Journal: “Three former congressmen now serving at the top ranks of the Trump administration misread their former House colleagues and failed, at least so far, in their effort to push an overhaul of the Affordable Care Act through the chamber. Now, Republican lawmakers have headed home for a two-week recess empty-handed and with a top legislative priority stalled, despite a concerted push by Vice President Mike Pence, White House Budget Director Mick Mulvaney and Tom Price, the secretary of Health and Human Services.”

“The biggest miscalculation by Mr. Pence and the two Trump cabinet members, lawmakers said, was that the conservative House Freedom Caucus would operate differently with a Republican in the White House than it did under former President Barack Obama, a Democrat.”

By every rational measure, “Donald Trump Defends Bill O’Reilly on Sexual Harrassment Allegations” should be the least surprising headline of any given day. Yet some of us who retain the ability to be shocked by our new normal still gasped and recoiled upon reading that the President of the United States had described the host at Fox News — which has reportedly paid out $13 million over the years to keep allegations of sexual harassment and verbal abuse quiet — as “a person I know well … a good person,” who “shouldn’t have settled” with his accusers, but instead taken his defense “all the way,” because, Trump said, “I don’t think Bill did anything wrong.”

Where even to begin, except with a reminder that we are now five days into April, a month Trump has designated “National Sexual Assault Awareness and Prevention Month”? The decree he signed on March 31 read in part: “We recommit ourselves this month to establishing a culture of respect and appreciation for the dignity of every human being.”