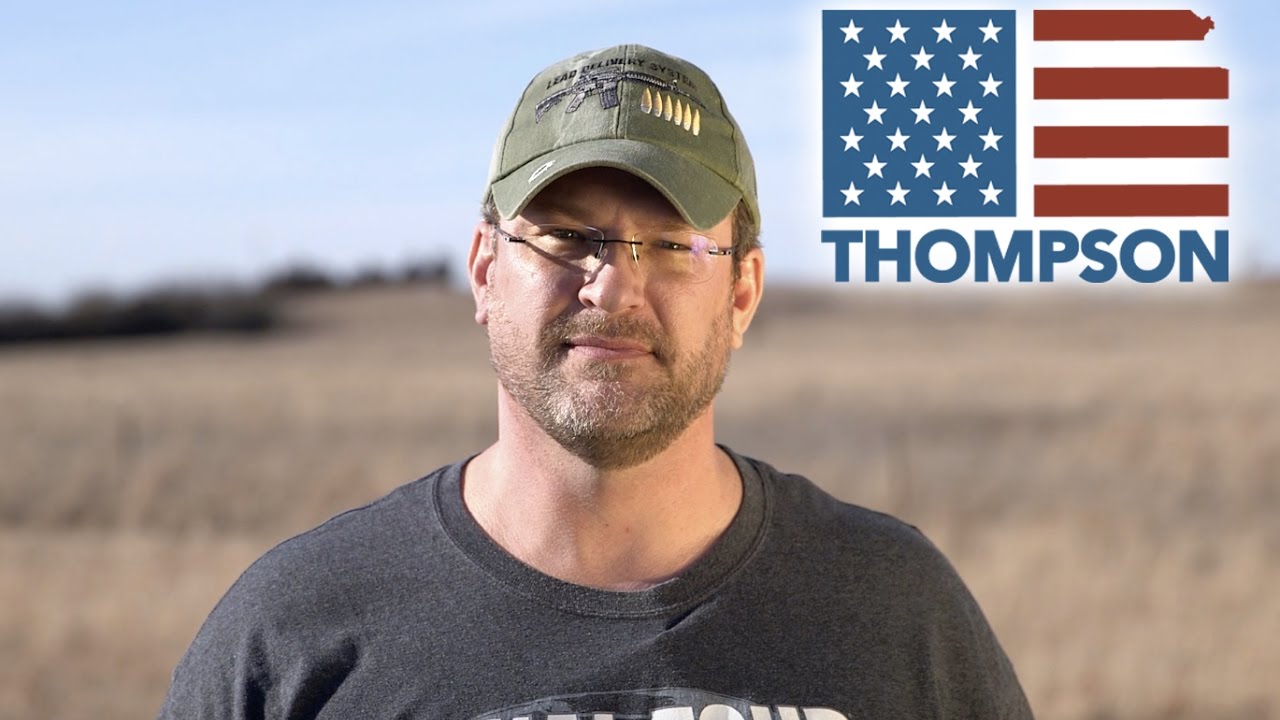 Republicans are suddenly putting more resources into next week’s special election in the Kansas 4th congressional district to fill the vacated seat of CIA Director Joe Pompeo. Even though Donald Trump won the district by 27 points, the race has reportedly tightened considerably in recent days.  Interestingly, Google Trends shows search interest in Kansas for Democrat James Thompson (D) more than double those of Republican Ron Estes (R) over the last week.  During the 2016 Republican presidential primaries, Google searches were highly correlated to the actual results of the primary finish.

The Kansas 4th was last represented by a Democrat in 1995, when Dan Glickman (D) was defeated during the 1994 Gingrich Revolution.

Shots of Syrian jets taking off again at Shayrat airbase after US strike. Middle finger to US. (@AP) pic.twitter.com/WuoNbrhgoD

“We need a Democratic Party that is not a party of the liberal elite but of the working class of this country,” Senator Bernie Sanders declared at a rally in Boston last week. This has become a very common refrain for Sanders specifically and the progressive left generally. After the election, Nation editor at large D.D. Guttenplan declared that liberal elites who spurned populism are responsible for President Donald Trump, while Chris Hedges argued last month that Trump’s greatest allies are, unwittingly, liberal elites.

“The elites, who live in enclaves of privilege in cities such as New York, Washington and San Francisco, scold an enraged population,” he wrote at Truthdig. “They tell those they dismiss as inferiors to calm down, be reasonable and patient and trust in the goodness of the old ruling class and the American system.” […]

But it’s worth asking: If all these full-throated attacks on liberal elitism ended with the ascension of a racist, sexist authoritarian who has a gross history of mistreating working people, then is attacking liberal elitism really the proper strategy for the opposition to Trump? Maybe the left should think about going back to attacking a more tried and true bugaboo: the wealthy.

he's using his missile strike for a fundraiser. pic.twitter.com/IXOzODmo5Z

Politico: “This loose confederation of web-savvy, anti-establishment right-wingers formed an important vanguard of Trump’s online support in last year’s election, and its unified opposition to the airstrike forewarns a political downside to intervention in Syria. While foreign wars tend to boost presidents’ popularity in the short term, Trump risks losing the segments of his base that flocked to his isolationist, ‘America First’ message.”

A warning from the polls about letting Obamacare "explode" https://t.co/ocXswdObEj pic.twitter.com/qzgg5A2thG

Axios: “Steve Bannon’s allies both inside and outside the White House are worried Trump is going to fire him. They’re scrambling this afternoon to figure out a way to persuade the president he’d be making a grave mistake. They argue that getting rid of Bannon will cost Trump among his “America First” constituency, and gain nothing among Democrats or the press.”

“They say Trump’s key to victory is to keep his base motivated. And that means keeping Bannon.”

Mike Allen reports Bannon “is increasingly isolated and will be forced out unless he can adopt a more cooperative approach, a top source told me.”

Meanwhile, “Steve Bannon and Jared Kushner, two warring senior White House aides, had a bury-the-hatchet meeting ordered by President Donald Trump, after arriving at Mar-a-Lago this week,” Politico reports.   “The sit-down, which was confirmed by two White House officials, was an attempt to smooth over tensions between the two men, which have dominated headlines for days. Whether the meeting was successful in creating a détente – and how long it lasts – is an open question, especially in a White House that has been dominated by infighting.”

The New York Times quotes Trump to his to top aides: “Work it out.”

Ezekiel Kweku of the New York Times says Steve Bannon Isn’t a Genius: “In each of these cases, Mr. Bannon’s preferred outcome was thwarted by rather ordinary political forces, the same ones he promised to circumvent and transcend. In a way, to believe in Mr. Bannon’s genius is to adopt the president’s belief in a sort of vulgar technocracy — the belief that the “best people” can solve any problem put in front of them, whether they have expertise in that field or not. A newspaper publisher can broker peace in the Middle East and revolutionize the government. A neurosurgeon can run the Department of Housing and Urban Development. A life as a real estate mogul and celebrity businessman is adequate preparation for the presidency. But the ability to grab power does not grant the wisdom to wield it, and ungrounded grandiosity is just pretension.”

The media loved Trump’s show of military might. Margaret Sullivan of the Washington Post asks “Are we really doing this again?”

Clara Jeffery, editor in chief of Mother Jones, offered a simple explanation: “It’s dramatic. It’s good for TV, reporters get caught up in the moment, or, worse, jingoism.”  She added: “Military action is viewed as inherently nonpartisan, opposition or skepticism as partisan. News organizations that are fearful of looking partisan can fall into the trap of failing to provide context.”  And so, empathy as the president’s clear motivation is accepted, she said — “with no mention of the refugee ban keeping those kids out, no mention of Islamophobia that has informed his campaign and administration. How can you write about motive and not explore that hypocrisy?”

Washington Post: “Newly confirmed Neil M. Gorsuch is likely to have an immediate impact at the Supreme Court, weighing in as early as next week on whether to consider expanding the breadth of the Second Amendment. He could play a decisive role this spring in determining how voting rights should be protected and in a major case on the separation of church and state.”

Kate Aronoff at The Guardian writes—No, Ivanka Trump will not moderate her father. She will just strengthen him:

The main criticism leveraged against the President Trump’s oldest daughter has been that she and her husband, Jared Kushner – now a senior Trump adviser – are complicit in what her father and his advisers are doing in the Oval Office. By virtue of being young, photogenic and not visibly unhinged, Ivanka and Jared have been painted as the great moderators – people with allegedly progressive views on things like women’s rights and climate change, who can temper the effects of Trump’s administration.

Her interview on CBS News this morning should lay those rumours to rest. “If being complicit is wanting to be a force for good and to make a positive impact, then I’m complicit,” the president’s oldest daughter shrugged. But as the interview shows, Ivanka is worse than complicit, and certainly no force for good. She serves a vital role in keeping her father’s administration afloat. Like Kushner and his adventures in the Middle East, Ivanka’s official capacity is ambiguous. Both have top-level security clearance, and have been sitting in on high-profile meetings between the president, various business leaders and foreign dignitaries since he was elected. Now she’ll have the first lady’s office in the White House. Ivanka seems to talk a lot about Women Who Work, though exactly what she’ll do in that office remains undefined. She’s already an invaluable asset for her father: Ivanka feeds the illusion that the Trump administration contains moderate voices.

President Trump’s trips to his luxury Florida resort “have already cost the US taxpayer at least $24 million — roughly as much as Barack Obama spent on travel in the first two years of his presidency,” the Independent reports.  “In total, Mr Obama’s travel bill over the eight years of his presidency came to $97 million — an average of $12.1 million a year.

How about this?  How about we bill him directly.  He is supposedly so rich.

William Greider at The Nation — The Senate Should Censure Trump:

Yes, by freakish happenstance, an unstable character with irresponsible impulses has been put in charge of the national government. But Trump is not in charge of us. People all over know this and are putting themselves in motion. The ferment is about more than the marches and banners. People are beginning to see themselves as active agents in the legislative battles, entitled to be heard because they are citizens. Does that sound corny? Yes some of us are corny optimists. […]

So how can the people talk back to Donald Trump? By proposing that the Senate adopt a resolution of censure officially denouncing Trump for his flagrantly fraudulent claims and, even worse, his unconstitutional behavior as president. The list of potential charges is robust. He and his family are blatantly in violation of the Constitution’s emoluments clause, which prohibits presidents from drawing business benefits from foreign interests. Trump also routinely falsifies official reporting to his own administration. Think of official censure as the highbrow answer to Trump tweets.