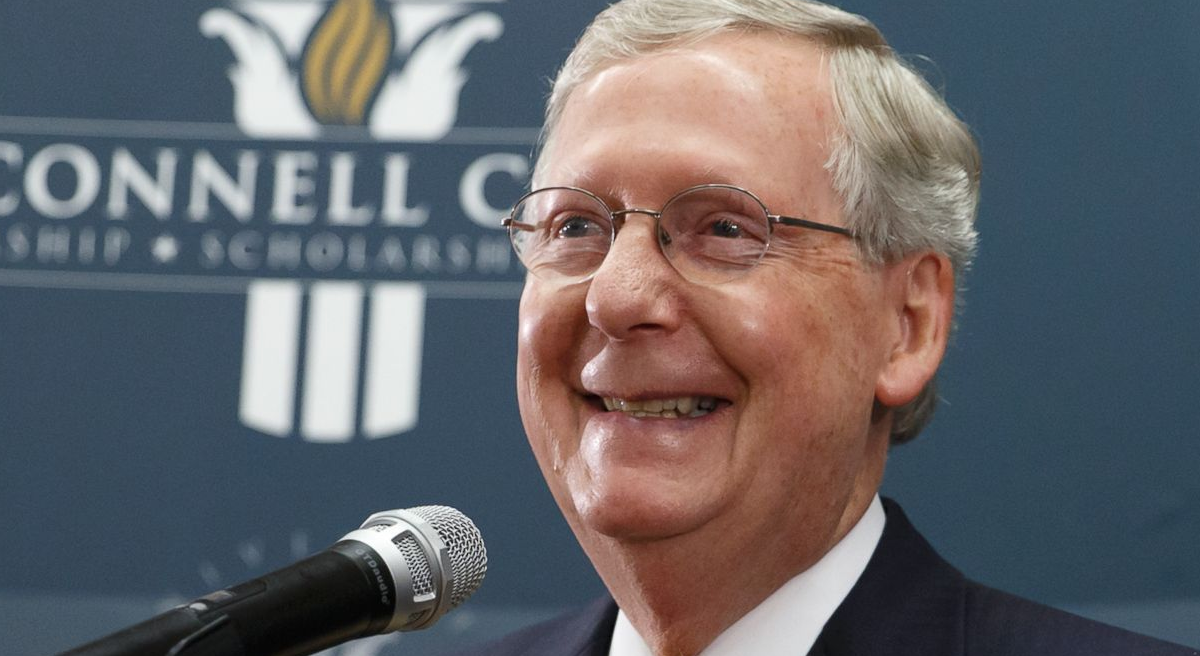 Adam Jentleson in the New York Times says Mitch McConnell has tried nothing and he is all out of ideas: “Rather than accept Democrats’ opposition as legitimate, Senator McConnell is dead set on escalation. The view among veteran McConnell watchers is he has already decided to go nuclear. For a man who chooses his words carefully, Mr. McConnell’s saying that Judge Gorsuch will be “confirmed on Friday” is tantamount to saying that he intends to go nuclear if Democrats block the confirmation on the floor… The majority leader has made no real effort to avert the nuclear option. To the contrary, he appears to be itching to pull the trigger — and in his insidious way, he wants to convince Democrats that it’ll be their fault when he does.”

And Democrats are voting no so that McConnell will pull the trigger.  The blood will be on GOP hands, not ours.   It was the GOP, and McConnell specifically, that broke the Senate, and if Tom Carper and Chris Coons ever suffer the vapors over that, they can blame Mitchy Poo.

Josh Kraushaar of the National Journal:

What’s sur­pris­ing is that Trump pub­licly turned on his one­time al­lies on Twit­ter. “The Free­dom Caucus will hurt the en­tire Re­pub­lic­an agenda if they don’t get on the team, & fast. We must fight them… in 2018,” he wrote. Even as many of his sup­port­ers were in­clined to lay blame for the bill’s fail­ure on Ry­an, Trump picked a fight with his base—and he’s los­ing. His threat to ne­go­ti­ate with Demo­crats also fell on deaf ears. Sev­er­al Caucus Group mem­bers re­spon­ded by us­ing his cam­paign rhet­or­ic against him, ar­guing the pres­id­ent is sink­ing in the very swamp he vowed to drain. New na­tion­al polls show Trump los­ing a little sup­port from the GOP base, which is a prob­lem giv­en his rock-bot­tom rat­ings with per­suad­able voters. Trump now needs the Free­dom Caucus more than it needs him.

This is what hap­pens when a pres­id­ent faces sag­ging ap­prov­al rat­ings, low staff mor­ale, and the shad­ow of scan­dal only two months in­to his ad­min­is­tra­tion. When a pres­id­ent can’t even pres­sure his core sup­port­ers, it’s a clear sign that his pres­id­ency is shrink­ing in the pub­lic’s eyes.

Institutionalized sexism is thriving under Trump and his heavily male administration. https://t.co/bQEbC8eVIx pic.twitter.com/yvTovtLd1W

Amy Walter on how to lose a majority: “The very public intra-party fight between President Trump and the Freedom Caucus is just the latest twist in the ongoing fight over the philosophical, strategic and ideological direction of the Republican party. As has been his mode of operation since his candidate days, Trump has taken to Twitter to shame/ intimidate/ cajole members of his own party. In this case, it was to get rebellious GOPers to ‘take one for the team’ and support a flawed, but nonetheless GOP-authored Obamacare replacement bill. But, in the end, it’s not the Freedom Caucus that gets hurt by this infighting. They sit in safe Republican seats and know their voters better than anyone in DC. Instead, it’s the vulnerable GOP incumbents who lose this fight. Why? The more the GOP gets bogged down in process instead of progress, the more likely it is that their voters become disillusioned and that independent voters abandon them. Combine these ingredients with an energized Democratic base and you have all the ingredients for a disastrous midterm election in 2018 for the GOP.”

“In fact, if you look back at the last four midterm elections where the party in the White House lost control of one or both houses of Congress, you see that they share the following traits in common: the president has approval ratings among his own partisans under 85 percent and approval ratings among independents in the 30’s or low 40s.”

President Trump can now “draw money from his more than 400 businesses, at any time, without disclosing it,” ProPublica reports.

“The previously unreported changes to a trust document, signed on Feb. 10, stipulates that it ‘shall distribute net income or principal to Donald J. Trump at his request’ or whenever his son and longtime attorney ‘deem appropriate.’ That can include everything from profits to the underlying assets, such as the businesses themselves.”

“There is nothing requiring Trump to disclose when he takes profits from the trust, which could go directly into his bank or brokerage account.”

“The pattern of Rice’s requests was discovered in a National Security Council review of the government’s policy on ‘unmasking’ the identities of individuals in the U.S. who are not targets of electronic eavesdropping, but whose communications are collected incidentally. Normally those names are redacted from summaries of monitored conversations and appear in reports as something like ‘U.S. Person One.’”

Axios: “This new information does not validate Trump’s wiretapping tweets as he specifically mentioned Obama administration surveillance of Trump Tower.”

“This is the most positive assessment of U.S. economic conditions since 2007, and only the second time that half or more of those surveyed have given the economy a thumbs-up. Driving the latest increase is a jump among Republicans over the past year.”

The Washington Post published a story that, if corroborated, could be a pretty big deal:

The United Arab Emirates arranged a secret meeting in January between Blackwater founder Erik Prince and a Russian close to President Vladi­mir Putin as part of an apparent effort to establish a back-channel line of communication between Moscow and President-elect Donald Trump, according to US, European and Arab officials.

The meeting took place around Jan. 11—nine days before Trump’s inauguration—in the Seychelles islands in the Indian Ocean, officials said. Though the full agenda remains unclear, the UAE agreed to broker the meeting in part to explore whether Russia could be persuaded to curtail its relationship with Iran, including in Syria, a Trump administration objective that would likely require major concessions to Moscow on U.S. sanctions.

Though Prince had no formal role with the Trump campaign or transition team, he presented himself as an unofficial envoy for Trump to high-ranking Emiratis involved in setting up his meeting with the Putin confidant, according to the officials, who did not identify the Russian.

In addition to being the founder of Blackwater, Erik Prince is also the brother of Trump’s Education Secretary, Betsy DeVos.

FiveThirtyEight: “Here’s one way you can tell what will become a problem for the White House: How many groups line up against the administration on a particular issue turns out to be a relatively good, semi-empirical way to gauge the level of difficulty Trump is in. Trump’s initiatives face resistance from a number of constituencies. But when several of these blocs band together, they cause stories to explode, forcing the White House to respond and often to shift direction.”

Here are six of the most important blocs: the bureaucracy, the courts, Democrats in Congress, the public, the media and Republicans in congress.

“Presidents have always had to grapple with most of these blocs… But Trump’s team, unlike the Obama administration, has publicly announced its intention to take on the press and the federal bureaucracy — so those two groups have had a more adversarial relationship with Trump as compared to Obama. And Obama, unlike Trump, could generally rely on members of Congress from his own party to back him. There was not a ‘Never Obama’ wing of the Democratic Party. So one way to look at Trump’s challenges is to evaluate how many of these groups are mobilized against him on particular issues.”

“In a White House where President Donald Trump commands reverence, Jared Kushner often refers to the president by one name: Donald. And while cable TV can dominate the president’s mood and set the agenda for senior administration staff, Kushner usually keeps his large flat-screen TV in his office turned off, a stark departure from other top aides,” Politico reports.

“Kushner, the president’s 36-year-old son-in-law and White House senior adviser, does essentially what he wants, having the benefit of not only Trump’s ear but — as a family member — his implicit trust.”

“But Kushner’s status as the big-issue guru has stoked resentment among his colleagues, who question whether Kushner is capable of following through on his various commitments and complain that his dabbling in myriad issues and his tendency to walk in and out of meetings have complicated efforts to instill more order and organization into the chaotic administration.”

Washington Post: “Years before Bannon became the architect of an anti-globalist revolution — working as chief strategist under President Trump to weaken free-trade deals, restrict immigration from a number of majority-Muslim nations and slam corporations that move jobs overseas — he made his fortune as the quintessential global capitalist.”

“An examination of Bannon’s career as an investment banker found that the Bannon of the 1980s and 1990s lived what looks like an alternate reality from the fiery populist of today who recently declared that ‘globalists gutted the American working class and created a middle class in Asia.’”

Politico: Bannon made more than half a million dollars last year from entities tied to big GOP donors.

John Cassidy: “Ten weeks ago, when Trump stormed into office attacking the media and promising a blitzkrieg of new policies and initiatives during his first hundred days, the dominant emotion among people who hadn’t voted for him was fear. Many commentators, myself included, warned about the dangers of democratic erosion, and sales of George Orwell’s 1984 soared.”

“Today, there are still plenty of reasons to be concerned about Trump and his illiberalism. The White House’s recent decision to dismantle President Obama’s clean-air regulations offers fresh testament to the malevolence of the Trump Administration’s agenda, and next week’s meeting between Trump and Xi Jinping, China’s President, will be a reminder of the enormous responsibilities that rest on a President’s shoulders. But, even among ardent Trumpophobes, fear and foreboding have been supplemented by wonderment at the White House’s string of gaffes. These days, instead of Big Brother, it often looks like the Keystone Kops are in charge.”