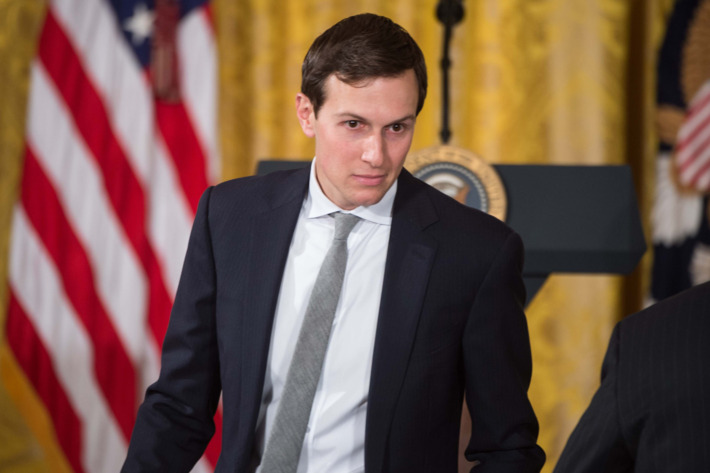 Jared Kushner “made a trip to Iraq over the weekend, visiting the country as the American military is aiding Iraqi forces in their brutal fight to retake Mosul from the Islamic State,” the New York Times reports.

“It was unclear what Mr. Kushner, who has been expanding his reach in his father-in-law’s administration, planned to gain from the trip. A senior administration official confirmed the visit, saying that Mr. Kushner, 36, who serves as a senior adviser to Mr. Trump, was invited by Gen. Joseph F. Dunford Jr., the chairman of the Joint Chiefs of Staff.”

So Mr. Kushner, who is an unqualified heir and heir-in-law who couldn’t make a building work on 5th Avenue in Midtown, has in his portfolio the task of fixing Iraq and Syria now; in addition to the overall plan for peace between Israelis and Arabs, managing and/or fixing relations with China, Mexico and Canada; creating and managing the newly created White House Office of American Innovation, which is supposed to overhaul the federal bureaucracy; fixing the entire Department of Veterans Affairs; modernizing technology used by the federal government; develop “transformative” infrastructure projects; and fix the opioid crisis.   Not to mention, he is in Iraq right now, instead of prepping for the summit later this week with Chinese President Xi Jinping, for which he has assigned a major role.

Kushner has also replaced Ted Cruz in as the leader in “Who has Washington’s Most Punchable Face?”

Washington Post: “Weighed down by dismal approval ratings, the president has been unable to wrangle enough support in Congress to advance his agenda and is searching for outside support to defend him from attacks coming from all sides.”

“Ahead of his 100th day in office, which he will mark this month, Trump has struggled to build a governing coalition that matches the nontraditional alliance that put him in the Oval Office. And he has turned to making enemies of former partners among Republicans in Congress, even as Democrats keep him at arm’s length.”

Said former White House adviser David Gergen: “He seems both politically and personally isolated these days. He’s flailing because he doesn’t know where to find his natural allies.”

The LA Times editorial on Our Dishonest President is a must read:

It was no secret during the campaign that Donald Trump was a narcissist and a demagogue who used fear and dishonesty to appeal to the worst in American voters. The Times called him unprepared and unsuited for the job he was seeking, and said his election would be a “catastrophe.”

Still, nothing prepared us for the magnitude of this train wreck. Like millions of other Americans, we clung to a slim hope that the new president would turn out to be all noise and bluster, or that the people around him in the White House would act as a check on his worst instincts, or that he would be sobered and transformed by the awesome responsibilities of office.

Instead, seventy-some days in — and with about 1,400 to go before his term is completed — it is increasingly clear that those hopes were misplaced… What is most worrisome about Trump is Trump himself. He is a man so unpredictable, so reckless, so petulant, so full of blind self-regard, so untethered to reality that it is impossible to know where his presidency will lead or how much damage he will do to our nation.”

“Some Republicans lawmakers have asked President Trump to ask for Koskinen’s resignation. But more than two months into Trump’s presidency, Koskinen is still in office, and the White House has not given a definitive answer about his future.”

I think I know why.  Guess what Koskinen has likely seen and has access to that no one else in the public has: Trump tax returns.

This is dictator stuff — Trump not telling public about new troops + more deadly rules of engagement in Iraq, Syria https://t.co/4x5JBtu5m8

A government shutdown at the end of April “is a very real possibility,” Republican sources tell Mike Allen — “mainly because Republicans remain as fractured as they were when they tanked health reform.”

“To avoid a shutdown, Republicans will probably have no choice but to seduce Ds. Steve Elmendorf, a top Democratic lobbyist, told me it’s very possible to construct a government-funding bill that’ll get Democratic votes (no defunding of Planned Parenthood, no money for a wall, a reasonable position on defense/non-defense spending).”

Said Elmendorf: “The only way you get to a shutdown is incompetence, which this group is certainly capable of.”

Stan Collender: This is the clown show that could lead to a government shutdown.

David Nather: “There have been a lot of recent signals that some quiet Trumpcare negotiations are still going on, but what do they really add up to? My best read, from talking to GOP sources over the weekend: Don’t bet on a Trumpcare comeback just yet, but don’t be shocked if it happens.”

“Republicans, including Freedom Caucus members, would really like to get an agreement this week that revives the whole thing. That’s why they’ve kept talking in recent days, and why Trump went golfing yesterday with conservative holdout Rand Paul.”

“No one’s actually sure if it’s possible.”

“They don’t give a shit about people.”  — DNC Chairman Tom Perez, quoted by The Hill, on the Republican party.  It’s true.

“President Trump entered his 11th week in office Friday in crisis mode, his governing agenda at risk of being subsumed by escalating questions about the White House’s conduct in the Russia probe — which the president called a witch hunt,” the Washington Post reports.

“Trump and his senior aides spent much of the day on the defensive, parrying the latest reports that senior administration officials had potentially acted improperly in the House Intelligence Committee’s investigation into Moscow’s meddling in the U.S. elections and possible links between Trump’s campaign and Russian officials.”

Meanwhile, CBS News has learned that U.S. investigators are looking into whether Trump campaign representatives had a role in helping Russian intelligence as it carried out cyberattacks on the DNC and other political targets in March 2016.

“I feel honestly like a part of my identity was stolen” — good @mckaycoppins piece on conservatives in Trump era:https://t.co/qP07dAZAyj

A new Associated Press-NORC Center poll finds 52% of Americans favor an independent investigation into Donald Trump’s Russian ties while just 23% are opposed. Another 22% say they neither favor nor oppose an investigation.  Broken down along party lines, more than three-quarters of Democrats favor an investigation while only one-quarter of Republicans do.

Change in Trump approval by groups, Jan 28 through March 25. pic.twitter.com/Tju0zVuLBh

Jeffrey Birnbaum, co-author of The Showdown at Gucci Gulch on the 1986 tax reform effort, sees little chance to repeat the feat this year.

“If history is an indication, the road to full-scale reform will be tortuous and lengthy. The Tax Reform Act of 1986 was debated in concept long before taking two years to wend its way through Congress. It died several times before public opinion and extraordinary political leadership revived it. Few veterans of ’86 believe Treasury Secretary Steven Mnuchin’s prediction that tax reform will be completed by this fall.”

Also instructive: “Tax reform was launched in 1985 with a scene that’s almost unimaginable today: a televised speech by Reagan, a Republican, followed by a Democratic response by Dan Rostenkowski, the chairman of the House Ways and Means Committee, endorsing the president’s initiative.”

A federal judge in Kentucky is the latest to take Donald Trump at his word when he says something controversial, ruling against efforts by Trump’s attorneys to throw out a lawsuit accusing him of inciting violence against protesters at a March 2016 campaign rally in Louisville, the Washington Post reports.

“At the rally, Trump repeatedly said ‘get ’em out of here’ before, according to the protesters, they were shoved and punched by his supporters. Trump’s attorneys sought to have the case dismissed on free speech grounds, arguing that he didn’t intend for his supporters to use force. But Hale noted that speech inciting violence is not protected by the First Amendment and ruled that there is plenty of evidence that the protesters’ injuries were a ‘direct and proximate result’ of Trump’s words.”

Said the judge: “It is plausible that Trump’s direction to ‘get ’em out of here’ advocated the use of force. It was an order, an instruction, a command.”