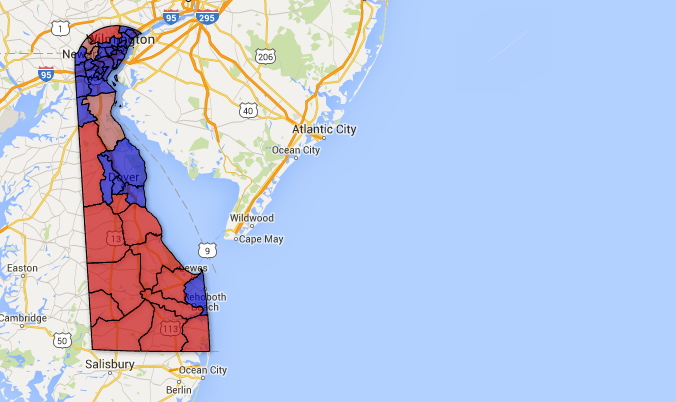 A Senate Bill that would establish an Independent Redistricting Commission that will take the redrawing of the state senate and representative district after each decennial census out of the hands of the partisan hands in the General Assembly is back passed the Senate in 2013 on a party line vote at the time, 13 Democrats voted in favor, and 7 Republicans voted against. But the bill died in the House.

Now, Independent Redistricting Reform is back, but with three Republican sponsors this time: Senators Pettyjohn and Delcollo and Representative Spiegelman. Both Spiegelman and Pettyjohn were in the GA back in 2013, while Delcollo was just elected last year. Pettyjohn was absent during the vote in the Senate in 2013. Does this increase the chances that the Senate and House will pass it? In the Senate, as before, I say yes. In the House, the situation remains doubtful, as Speaker Schwartzkopf enjoys having the tool of redistricting at his disposal.

What will this bill do? Create an independent commission that will be responsible for redistricting. And creating that commission is a massively detailed process, which the bill addresses. The bill would create a pool of twenty-four potential Commission members that will be selected by a bipartisan judicial panel from applications filed with the Commissioner of Elections. The pool will consist of eight current or former Delaware attorneys or former Delaware judges and sixteen other citizens of Delaware. The pool must include eight candidates from each of the State’s two largest political parties and eight candidates that are not a member of either of the State’s two largest parties. Prior to selection of Commission members, the following individuals shall each have the opportunity to strike one candidate from the pool: the Speaker of the House, the House Minority Leader, the President Pro Tempore of the Senate, and the Senate Minority Leader. From the pool of remaining candidates, the Secretary of State will draw by lot until the following conditions are satisfied: 1) The Commission will have nine members, three of whom must be current or former attorneys or former Delaware judges, and six of whom must be other Delaware citizens. 2) Three members of the Commission shall be members of the State’s largest political party, three shall be members of the State’s second largest political party, and the remaining three shall not be a member of either of the State’s two largest political parties. Eligible candidates may not be, and may not have in the five years prior to appointment been, a federal or state lobbyist, an officer of a federal or state political party, an officer of a campaign committee, or an elected federal or state official.

Commissioners are also prohibited from running for the General Assembly in the election following the redistricting, and from registering as a federal or state lobbyist for five years following the term as a Commissioner.

AN ACT TO AMEND TITLE 29 OF THE DELAWARE CODE RELATING TO THE REDISTRICTING OF THE GENERAL ASSEMBLY.

STATUS: Waiting for a hearing in committee.