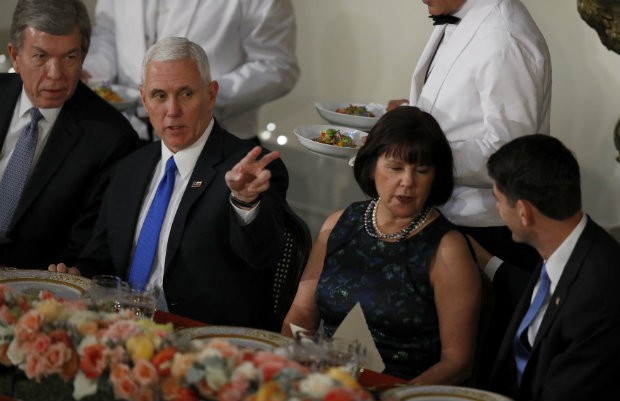 I keep trying to write this, but it keeps sounding dirty. Mike Pence applies new definition to eating out? See what I mean???

For his part, Mike Pence is also very, very committed to ensuring that there’s never even the slightest appearance of impropriety with regards to his marriage. To achieve such a feat, Pence reportedly won’t have dinner alone with a woman who is not his wife; he also won’t attend any events where alcohol is served unless Karen is by his side. Suddenly the “mother” makes a lot more sense.

There’s so many possible reasons for this.

First, does Pence only views women as sexual objects – who you can never break bread with?

Second, doesn’t he trust himself to not be tempted by a Jezebel he’s dining with in a restaurant? What exactly does he think is going to happen in a public restaurant?

Third, this is a great way to limit women professionally. He’ll have dinner (lunch? play golf? go to “the club”?) with men he works with, but not women. Guess who gets his ear… and the promotion.

Fourth, he views women as threats and liars, fearing that they will accuse him of “something” if he has dinner with them. If he’s worried about that, then he probably has cause to be concerned about his behavior. Either that or his wife doesn’t trust him. At. All.

I think it’s parts of all four reasons – women are for sex, they tempt god-fearing men, they shouldn’t be in the workforce, they lie and his wife doesn’t trust him.

“He also won’t attend any events where alcohol is served unless Karen is by his side.”

Does he believe alcohol will make him behave differently? He needs a keeper if he’s having a glass of wine? Someone to make sure he doesn’t fall on top of another women? His wife is his protection… from behavior he’d participate in if she wasn’t around? That’s how it sounds.

I’m sure Pence thinks his “rules” make him appear pious, when they actually make him look like a man who can’t be trusted around women. Make no mistake, this is his issue.

But other conservative men agree:

Seriously what’s the appropriate reason for a married person to go out for a meal alone with a member of the other sex (outside of family)?

Erick Erickson‏Verified account @EWErickson@MattWalshBlog planning your spouse’s surprise party or funeral and that is it.

You can only have a meal with a member of the opposite sex if you’re planning their surprise party or funeral? This is how they think.

*Consenting adults can make the rules in their relationships, but, let me point out, that Mike Pence doesn’t apply that standard to all consenting adults – and that’s why I’m calling him out. That and it’s really weird.