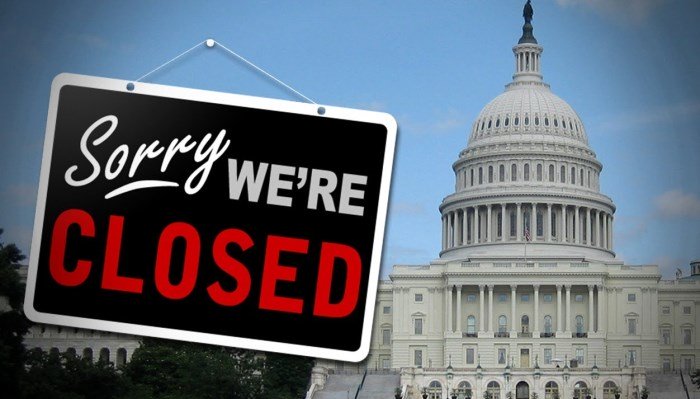 Mike Allen says that the Trump White House now fears a Government Shutdown. Remember, the Republican Party is in sole control of all three branches of government and are soley responsible for governing now.  And they can’t even keep the lights on.

“Amid high-stakes postmortems that include conversations with President Trump about White House staffing and operations, aides are rewriting their plans for the next legislative fight — with a weakened president and speaker, emboldened House hardliners, and a party at war with itself.”

“Forget pie in the sky like tax reform or a massive infrastructure package. Now aides fear a government shutdown when the current continuing resolution runs out at the end of April.”

Said one White House official: “We underestimated the vitriol in the Republican conference. The animosity between the hardline House Freedom Caucus and leadership is such that it’s hard to see how the coalition comes together. Each time there was an accommodation, there was a new demand.”

Playbook: “The government is slated to shut down at the end of April. The House — where funding the government will be most difficult — is only in session for 12 more days between now and then. (The House is out from April 7 through April 25.)”

Andrew Sullivan: “So time to take a deep breath? I’d say a shallow one. I can see two possible scenarios that could follow a drawn-out Trump slump. One is the nightmare I’ve been having for more than a year now. A president hobbled domestically by his own party’s divisions and the opposition’s new energy may be tempted — Putin-like — to change the subject in a way that vaults him back to popularity. A foreign altercation from which he will not back down? A trade war? A smidge likelier, I’d say, is an over-the-top response to an inevitable jihadist terror attack in a major American city. A demagogue loses much of his power when he tries to wrestle complicated legislation through various political factions, in the way our gloriously inefficient Constitution requires. He regains it with rank fear, polarization, and a raw show of force. Heaven knows what the Constitution will look like once he’s finished.”

“The other possibility is that Trump really does at some point realize he’s sinking fast and decides on a hard pivot. He wants to win and be loved, and if he keeps losing and becomes more widely loathed with his current strategy, it’s by no means out of character for him to recalibrate. He could use the possible failure of Trumpcare to feed Paul Ryan to the Breitbartians, and reach out to Democrats on a tweaked Obamacare and infrastructure package. He could dump Bannon the way he dumped Manafort and bullshit his way through all the inconsistencies (the one thing he remains rather good at). He could wrest himself like Kong on Skull Island from the giant lizards and become the tribune of the forgotten men and women he wants to be, and combine nationalism and protectionism with, er, socialism, like his heroine Marine Le Pen. He could finally realize the potential he has thrown away so far, and become an American Perón.”

From my sources and what has been openly reported, it increasingly looks like #Flynn may have a deal with the FBI. #trumprussia pic.twitter.com/U0PHdexlFV

“With President Trump’s sweeping agenda hitting the rocks as he edges toward the 100-day mark, top aides, political allies and donors are embroiled in a furious round of finger-pointing over who is at fault,” Politico reports.

“The recriminations extend far beyond the implosion of the GOP’s Obamacare repeal on Friday. Senior aides are lashing each other over their inability to stem a never-ending tide of negative stories about the president. There is second-guessing of the RNC’s efforts to mobilize Trump’s electoral coalition on behalf of his legislative priorities. At the EPA, a top official quit recently amid accusations the department is failing to advance the president’s campaign promises. And one of Trump’s most generous benefactors, Rebekah Mercer, has expressed frustration over the direction of the administration.”

“This account of White House infighting is based on interviews with more than two dozen Trump aides, confidants and others close to his administration… They described a distracting and toxic atmosphere, with warring power centers blaming one another for an ever-growing list of setbacks. The dysfunction has further paralyzed an administration struggling to deliver on its blunt promises of wholesale change.”

Playbook: “Trump administration officials have told us that the president is increasingly frustrated with the conservative Freedom Caucus, led by North Carolina Rep. Mark Meadows (R-N.C.). They say the group did not negotiate in good faith — a claim the HFC vehemently denies. Here’s the problem for Trump: the Freedom Caucus has 30 or so members, which is more than enough to stop any and all of his legislative priorities. So, unless Trump moves to the left and starts working with Democrats, he cannot pass bills without the Freedom Caucus. Or, Trump — with the assistance of Hill leaders — can try to split the group apart on an issue-by-issue basis.”

Trump on Twitter this morning: “Democrats are smiling in D.C. that the Freedom Caucus, with the help of Club For Growth and Heritage, have saved Planned Parenthood & Ocare!”

Jennifer Rubin: “Ryan will remain speaker because no one else wants the job, but in a sense he does not “lead” the House Republicans, let alone the House. He is continuously caught in the crossfire between the moderates and the far right, just as his predecessor was. He will have his hands full keeping the House together in the future on controversial, “hard” votes. The lesson members learned was to look after their own interests. Calling Ryan and Trump’s bluff worked well for them.”

Stan Collender says tax reform is already in trouble: “Many of the very same pressures that stopped the GOP’s American Health Care Act dead in its tracks will be present again with tax reform. As a result, unlike what many analysts were saying just a few days ago, corporate tax reform this year not only is no longer a sure thing , it has to be considered to be in trouble.”

“The reason for that difficulty? The January fiscal 2017 budget resolution was largely pro forma; it made no substantive policy changes and was done just to get reconciliation instructions in place for ACA repeal. Many House and Senate Republicans held their noses and voted for it even though it had high deficits and what they considered to be excessive spending levels only so the AAC repeal debate could get underway. By contrast, the fiscal 2018 budget resolution that Congress will consider later this year will be the real thing, with deficits and spending levels that will be anything but acceptable to many representatives and senators.”

“One remaining question is whether the caucus will start to function like a separate party that is only loosely affiliated with a major party, as the Southern Democrats did for much of the 20th century. Southern Democrats exacted lots of legislative compromises to protect their interests, most notably shaping public policy to preserve segregation and exclude African-Americans from federal programs. Since then, the specific issues and ideas have changed. Freedom Caucus members have a pretty good idea of what kinds of bills they don’t like. The question remains what kinds of concessions — if any — can bring them on board.”

Washington Post on how President Obama is spending his post-Presidency.  It ain’t all parasailing: “Both he and the former first lady have entertained friends in their Kalorama home, newly redecorated to suit their modern style; and both frequently go into in their new West End office space. About 15 staffers work there, with the framed flag that the Navy SEALs who killed Osama bin Laden presented to the former president displayed in the entryway. One floor of the new office houses aides, including Jarrett, who are helping to build Obama’s foundation, which is headquartered in Chicago.”

“His first major speech as a private citizen will come in May, where he will be awarded a Medal of Courage as part of a celebration of President John F. Kennedy’s centennial.”

What happens to a country when a leader's words are worthless? When their promises are toothless, useless? https://t.co/GmaUzqzgnr

President Trump handed German chancellor Angela Merkel a bill — thought to be for more than £300bn — for money her country “owed” NATO for defending it when they met last week, the Times of London reports.

The bill — handed over during private talks in Washington — was described as “outrageous” by one German minister.

Said the minister: “The concept behind putting out such demands is to intimidate the other side, but the chancellor took it calmly and will not respond to such provocations.”

Former Vice President Joe Biden told Colgate University students that if he had run for president in 2016 he could have won, the Utica Observer-Dispatch reports.

Said Biden: “On a college campus I will never, never do anything other than answer the question completely unvarnished and straightforward. The answer is that I had planned on running for president. And although it would have been a very difficult primary, I think I could have won.”

Biden added that he had a lot of data collected and was fairly confident that as a Democratic party’s nominee, he could have won.