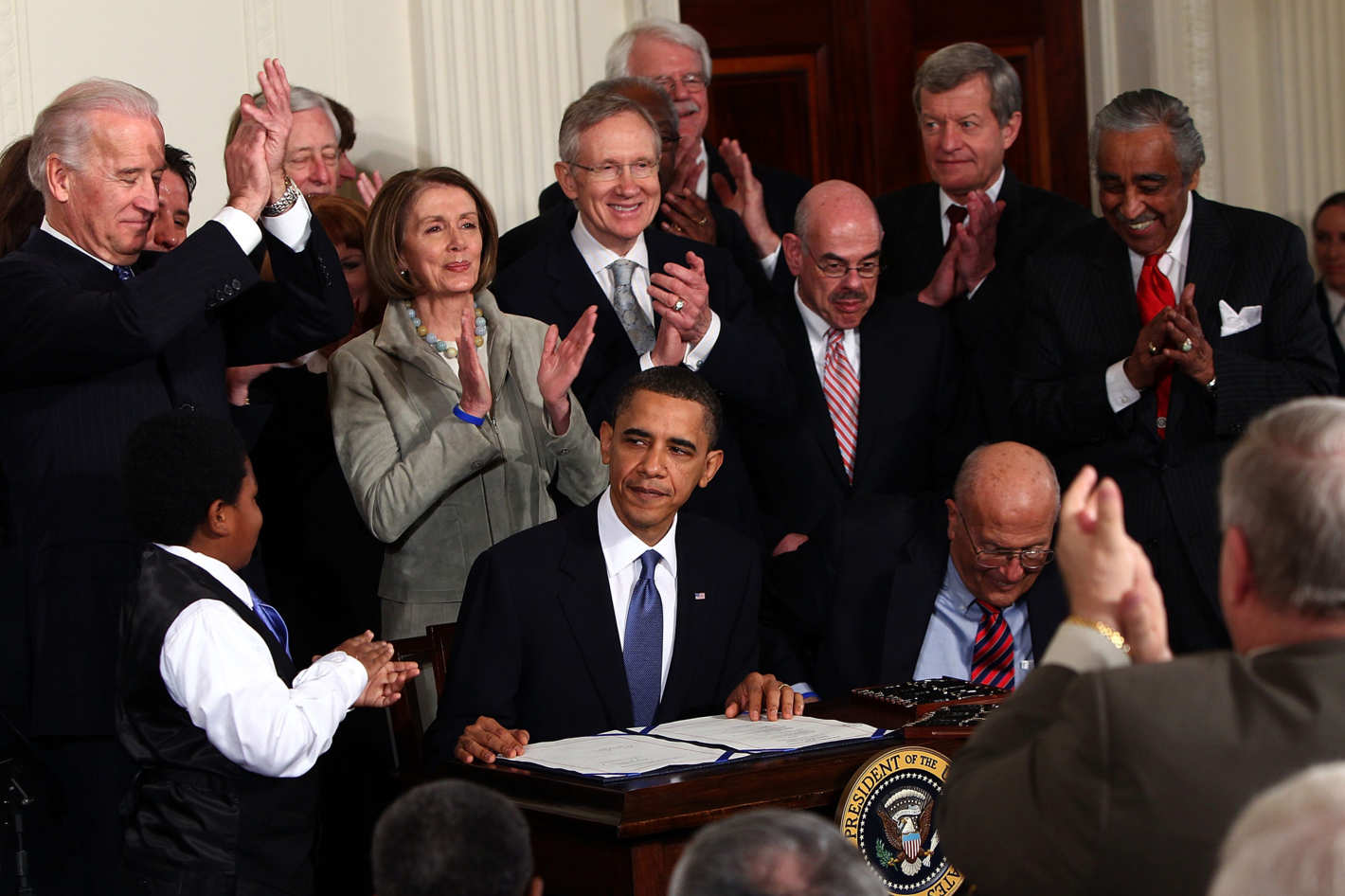 The revised GOP health care bill would cost more than the earlier version and still leave 24 million fewer people insured by 2026, new estimates from the Congressional Budget Office show.  The legislation to repeal major portions of Obamacare would reduce the federal deficits by $150 billion over 10 years, according to the revised estimates. The original bill would have lowered the deficits by $337 billion. The new numbers reflect the amendments made to the bill that were announced on Monday, but do not take into account a deal underway to woo House conservatives to support the measure.

House leaders were forced to postpone voting on the measure Thursday, after a day of multiple high-level, tension-filled meetings that still left conservative members opposed to the bill.   Trump officials meeting with the House GOP conference said Trump is done negotiating over the legislation.   They were told that the President wants a vote on Friday, and if the vote fails, Trump says he will move on to other priorities.  Trump warned House Republicans that he will leave Obamacare in place unless they approve legislation to repeal and replace it, The Hill reports.

The Washington Post says the vote will be held Friday, regardless of whether they have lined up the votes.

“Thanks to this law, more than twenty million Americans have gained the security and peace of mind of health insurance. Thanks to this law, more than ninety percent of Americans are insured—the highest rate in our history,” he wrote. “So the reality is clear: America is stronger because of the Affordable Care Act.”  – Former (God, I hate writing that word) President Obama, breaking his post Presidential silence yesterday.

This is outrageous: Not a single woman in the room as @Mike_Pence and @HouseGOP propose removing maternity coverage in #Trumpcare. pic.twitter.com/wwY6WsN206

House Intelligence Committee chairman Devin Nunes (R-CA) does not know “for sure” whether President Trump or members of his transition team were even on the phone calls or other communications now being cited as partial vindication for the president’s wiretapping claims against the Obama administration, ABC News reports.

Said a spokesperson: “He said he’ll have to get all the documents he requested from the about this before he knows for sure.”

Don't you fuckers ever mention Dukakis in the tank again. pic.twitter.com/JofOt5oMDa

Others joked that the Truck is America.  German Lopez has another metaphor, or analogy in mind:

Trump came into office expecting to, basically, ‘Art of the Deal’ his way through the job — striking the best, most beautiful deals to repeal Obamacare, eliminate trade treaties, chase out undocumented immigrants, and bring back jobs. This was all a great act on the campaign trail, and Trump’s supporters loved it.  But much like Trump’s driving in the images above, it was all an act. And Trump is now learning that no amount of miming and showmanship will let him move the parked truck — or Congress — on the current debates about health care and future pieces of legislation if people and lawmakers just don’t like what he’s proposing.

The man who first talked about Trump’s tiny hands so many years ago has scorched him again. Graydon Carter in Vanity Fair:

It can reasonably be said that our dear leader is now the most ridiculed man on the planet. In fact, he may well be the most ridiculed man in history. For a preening narcissist who takes himself terribly seriously, being the butt of the joke heard round the world has got to hurt. The handpicked assortment of craven nitwits and supplicants that he has surrounded himself with have valiantly tried to insulate him from the derision. But they’re only human. […] Hats off to them for their tenacity, but no amount of spin is going to change the fact that the Trump White House, like the company its inhabitant has run for the past four decades, continues to be a shambolic mess.

Trump’s one brief moment of acting presidential—when he read off a teleprompter for 60 minutes and 10 seconds during his address to Congress—served only to show just how low the bar for presidential behavior has plummeted since January. Watching TV commentators applaud him for containing himself for a little over an hour was like hearing a parent praise a difficult child for not pooping in his pants during a pre-school interview.

The white working class thought Trump would help them. They're slowly realizing he's going to screw them. pic.twitter.com/m0acIMr9bv

Man, these Quinnipiac numbers are devastating:

Rep. Adam Schiff (R-CA), the top Democrat on the House Intelligence Committee, told CNN that he has been presented with new information on collusion between associates of President Trump and Russia that would merit a grand jury investigation.

Said Schiff: “We continue to get new information that, I think, paints a more complete picture of at least what we know at the outset of our investigation.”

San Diego Union-Tribune: “The Department of Justice has not made public the existence of an investigation, nor detailed what crimes it suspects Hunter or members of his campaign may have committed. Other lawmakers accused of personal spending have been indicted on charges including income tax evasion and making false reports to the Federal Election Commission.”

FBI uncovering evidence of treason. There is no other word for it.https://t.co/JLY7KZfQIY

Ezra Klein:  “If it passes, the American Health Care Act will be Donald Trump and Paul Ryan’s Iraq War. It’s been sold with lies. It’s been pushed forward with a shock-and-awe legislative strategy. And its architects are woefully unprepared for the chaos it would unleash upon passage.

There is an honest argument that could have been made for the AHCA. Conservatives believe it is not the government’s responsibility to ensure the poor can afford decent health insurance. They argue that if taxpayers are pitching in for someone’s coverage, that coverage should be lean; a high-deductible plan that protects against catastrophic medical expenses is plenty for charity care. Under this view, the basic structure of Obamacare — which taxes the rich to purchase reasonably generous coverage for the poor — is ill-conceived and should be reversed.

The core philosophical disagreement here is real and worth hashing out. Whereas liberals see access to health care as a right, conservatives see it as more akin to transportation — important, and perhaps worth subsidizing at low levels, but if someone can’t afford a car, it’s not the government’s responsibility to buy them one, much less buy them a nice one. This is the viewpoint the AHCA reflects.

It is not the viewpoint elected Republicans are selling. Instead, their rhetoric fits the sort of plan that Sen. Bernie Sanders might offer.”

Nancy Pelosi on AHCA: "They're scrambling." —via @MSNBC pic.twitter.com/YKZhQLicVf

I loved her smile there at the end.   LOL.

Because of Donald Trump, some kids were afraid to go to school.

On February 15th, Immigration and Customs Enforcement (ice) officers conducted a raid in Las Cruces, arresting people at a trailer park on the outskirts of town. The raid came a few weeks after President Trump signed two executive orders, signalling his plans to fulfill a campaign promise of cracking down on undocumented immigrants. Rumors spread that there were further raids planned, though none took place. On February 16th, a Thursday, Las Cruces’s public schools saw a sixty-per-cent spike in absences compared to the previous week—twenty-one hundred of the district’s twenty-five thousand students missed school. Two thousand students stayed away again the next day. Attendance returned to normal the following week, which made the two-day rash of absences all the more pronounced. “It was alarming,” Greg Ewing, the district’s superintendent, told me. News of the raid caused such fear in the community that Ewing wrote a letter to parents on the 16th, in English and Spanish, reassuring them that “we do not anticipate any ice activity occurring on school campuses.”

Trump has told people close to him that he regrets going along with Paul Ryan's plan to push health care first https://t.co/WZM7qpUueP

Paul Ryan joins many others under the bus.  Remember, Trump can never fail.  He can only be failed.