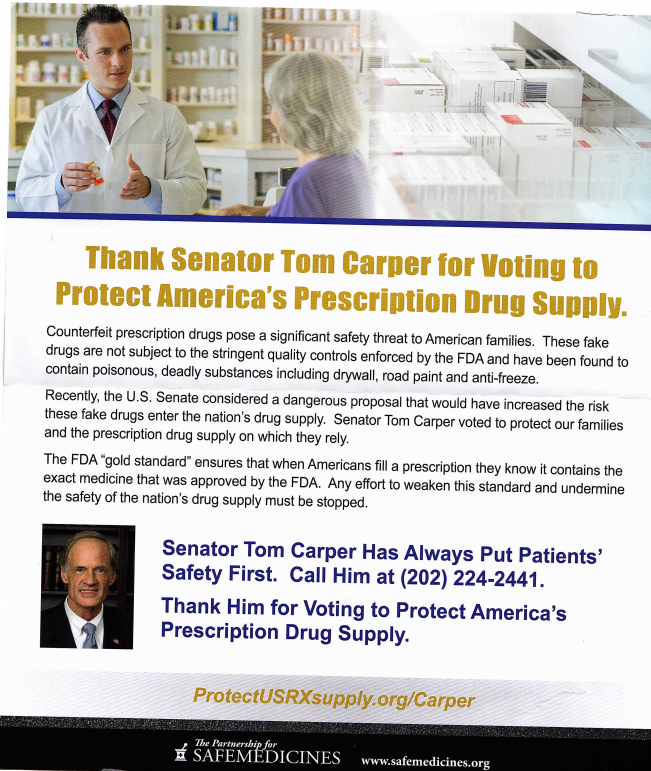 Yesterday’s mail included a flyer from a group called The Partnership for Safe Medicines — asking us to thank Senator Carper for his vote that would have asked for changes to the ACA to include a provision to let Americans import their prescription drugs from Canada.  Take a look at the images above and  below to see this bit of propaganda:

Did you see what they did there?  They want to make this about counterfeit drugs and that somehow millions of Americans armed with prescriptions are going to be ordering fake drugs from Canada.  What they’ve done here is erase a couple of big things — that the Canadians get their drugs from the same places we do.  And that if we approve this importation, you can approve it from the same pipelines that Canadians get their drugs from.  The Canadians have drugstores too, and while you may have to get your prescription rewritten by a Canadian doctor, Canadian drugstores are not in the business of selling fake drugs to their citizens.  They’d be shut down by the Canadian government, right?

The key to safely importing drugs from Canada is to steer Americans to the places where Canadians are allowed to buy their drugs from.  That is probably harder than it sounds, but it can’t be impossible.  If Americans are buying fake drugs from Canada now, it is because they do not have enough information to identify an approved and licensed supplier.  This is something that the FDA could do relatively easily and tell us where to find this info.

So we aren’t particularly fooled by this spendy bit of propaganda by people who have a decent investment in Carper’s campaigns.  And if I am a Democratic legislator anywhere, I am asking my funders to stand down from sending out stuff like this.  Dems are in no mood for corporate lobbyists trying to convince us that they’ve gotten you to stand up for our interests.  Because they haven’t.  We still know that Americans spend the most on prescription drugs and we know why.  We don’t need mailings from your funders to remind us of why we pay such a hefty price.

6 comments on “We’re Not Buying It, Senator Carper”