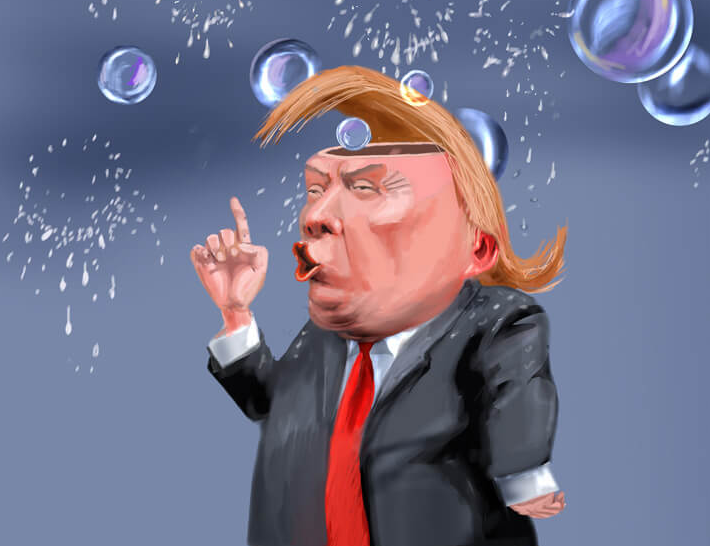 A Wall Street Journal editorial that is a must read this morning:

If President Trump announces that North Korea launched a missile that landed within 100 miles of Hawaii, would most Americans believe him? Would the rest of the world? We’re not sure, which speaks to the damage that Mr. Trump is doing to his Presidency with his seemingly endless stream of exaggerations, evidence-free accusations, implausible denials and other falsehoods.

The latest example is Mr. Trump’s refusal to back off his Saturday morning tweet of three weeks ago that he had “found out that [Barack] Obama had my ‘wires tapped’ in Trump Tower just before the victory” on Election Day. He has offered no evidence for his claim, and a parade of intelligence officials, senior Republicans and Democrats have since said they have seen no such evidence.

Yet the President clings to his assertion like a drunk to an empty gin bottle, rolling out his press spokesman to make more dubious claims…

Two months into his Presidency, Gallup has Mr. Trump’s approval rating at 39%. No doubt Mr. Trump considers that fake news, but if he doesn’t show more respect for the truth most Americans may conclude he’s a fake President.

New York Times: “First, aides say that Mr. Trump, who often says, ‘I’m, like, a really smart person’ in public, is driven by a need to prove his legitimacy as president to the many critics who deem him an unworthy victor forever undercut by Hillary Clinton’s three-million-vote win in the popular vote.”

“Second, fighting back — in this case, against Mr. Obama, the F.B.I. director and members of his own party who say his claim about phone taps is false — is an important part of the president’s self-image. The two most influential role models in Mr. Trump’s youth were men who preached the twin philosophies of relentless self-promotion and the waging of total war against anyone perceived as a threat.”

The truth is, the President is vastly unintelligent.  Or to put it bluntly, he is stupid. Yet he is also a narcissistic sociopath who at the same time suffers from a massive inferiority complex.   So when he said last night that “many people don’t know Lincoln is a Republican,” or “who knew that healthcare was so complicated?” several weeks ago, he is saying that because HE didn’t know.  Because he is stupid.  But he assumes everyone else doesn’t know, because there can be no one smarter than him, because he thinks he is this genius billionaire who needs to be superior to all.

Former Colorado Republican Party chairman Steven Curtis “is charged with forgery and voter fraud for allegedly forging his wife’s mail-in ballot from last year’s election,” ABC Denver reports.  Curtis claimed in a pre-election interview  that “virtually every case of voter fraud I can remember in my lifetime was committed by Democrats.”  However, the Colorado Secretary of State’s Office says “this is the only voter fraud case that has ended in charges stemming from last year’s election.”

The assumption going forward must be that when any Republican talks of voting fraud, they are doing so because they committed it themselves.   And then we should lock them up.

Often loose w/ facts, a moment of truth for Trump —via @PeterAlexander pic.twitter.com/ySsyxzCJC0

“There’s just never been any question in my mind about that. I’ve been inside a cover-up. I know how they look and feel. And every signal they’re sending is: ‘We’re covering this thing up.’”

Huffington Post: “Faced with the increasingly clear reality that House conservatives will vote down the Republican health care bill, GOP leaders may be moving toward reopening negotiations on their Affordable Care Act rewrite.”

“Or Republicans may be moving closer to an embarrassing floor defeat.”

Republicans can afford only 21 defections in the House and according to The Hill, 19 Republicans are firmly opposed to the bill.

The more conservative the bill is, the more DOA it is in the Senate.   And the more disastrous it would be to both the American people and to their future electoral prospects.  I agree with Nick below:

That’s the irony over this whole debate.  Obamacare Repeal and Replace is going to fail BECAUSE it does not harm people enough.

Politico: “For a president with a penchant for vengeance – who named ‘an eye for an eye’ as his favorite biblical passage, who banned media outlets from campaign events when he didn’t approve of their coverage, who ousted a GOP state chairman after the election whom he viewed as disloyal, who reminded a GOP governor just last week who didn’t endorse him that ‘I never forget’ – the roll call vote on the Republican health care plan, expected Thursday, will be the first accounting of who’s with him and who’s against him on Capitol Hill.”

“Those close to Trump describe his largely binary world view: you’re either on Team Trump or against Team Trump. ‘Get even with people,’ Trump outlined his philosophy in a 2011 speech. ‘If they screw you, screw them back 10 times as hard. I really believe it.’”

Obama's pitch was: "There are some things more important than keeping your seats, and passing health care reform is one of them." https://t.co/HOY85t26Od

Forbes: “Never has an American president taken office with such immense and complicated assets. Nor has one brought along a busload of rich partners who, by dint of previous deals and brand association, stand to reap profits in real time, as the president serves.”

“To better understand this global network, Forbes looked into each of these 36 partners, traveling to five countries to interview more than a dozen of them… But perhaps the most interesting tidbit comes in the aggregate. Trump’s network extends to at least 19 countries. And these guys (yes, they’re all men) share a set of consistent traits, even as property developers go. This group is uniformly rich–seven are members of the Forbes Billionaires list; many more claim centimillionaire status. They reflect their partner–a mélange of bombastic marketing, over-the-top style and political connections.”

“And all of them are trying to figure out, to various degrees, how to cash in on the 45th president.”

WDRB in Kentucky reports that after Trump held his rally, he told the station that he wouldn’t answer any questions about his allegations that President Obama wiretapped him or about the Russians, reports CNN’s Andrew Kaczynski.

Lawrence Smith, who interviewed the President, said, “The White House did make it clear the President would not answer questions about wiretapping or the investigation into Russia’s role in the election, so we stuck to issues most directly important to Kentucky.”

Barry Fulmer, the vice president and director of news at WDRB, told CNN’s KFile in a statement: “Just prior to the interview the WH made clear it would not discuss wiretaps. We pointed that out in our story, but focused on Republican/WH changes and how it affects Kentucky.”

CNN: “Since 2013 — when Trump’s Miss Universe pageant was held in Moscow — Trump has at least nine times claimed to have spoken to, met, or made contact with Putin. But as the 2016 campaign wore on and his statements on Putin began to attract more scrutiny, Trump changed course, denying having ever met the Russian president.”

“I am not trying to get ‘top level security clearance’ for my children. This was a typically false news story.”

“The whole world had a chance to watch this unfold, and it was a direct test of his credibility. And the whole world now knows he lied about it. We’ve seen it again and again. When we have a president who is a congenital liar, it really matters.”

“The CBO recently said that around 24 million fewer Americans would have health insurance in 2026 under the Republican repeal plan than if the current law stayed in place,” the New York Times reports.

“That loss was bigger than most experts anticipated… But one piece of context has gone little noticed: The Republican bill would actually result in more people being uninsured than if Obamacare were simply repealed. Getting rid of the major coverage provisions and regulations of Obamacare would cost 23 million Americans their health insurance, according to another recent C.B.O. report. In other words, 1 million more Americans would have health insurance with a clean repeal than with the Republican replacement plan, according to C.B.O. estimates.”

“The large gap between what the White House believed about the F.B.I. investigation and the actual facts of that investigation reveals several things. First, Comey has been successful in concealing details from Trump’s closest advisers. One of the reasons that Trump and the White House have been exuding a smokescreen of misinformation is because they are as clueless about what Comey knows as everyone else is.”

“In fact, there are very few officials who understand the true extent of the investigation.”

Ex-Trump campaign chairman Paul Manafort “secretly worked for a Russian billionaire to advance the interests of Russian President Vladimir Putin a decade ago and proposed an ambitious political strategy to undermine anti-Russian opposition across former Soviet republics,” the AP reports.

“The work appears to contradict assertions by the Trump administration and Manafort himself that he never worked for Russian interests.”

“Manafort pitched the plans to Russian aluminum magnate Oleg Deripaska, a close Putin ally with whom Manafort eventually signed a $10 million annual contract beginning in 2006… Manafort and Deripaska maintained a business relationship until at least 2009, according to one person familiar with the work.”