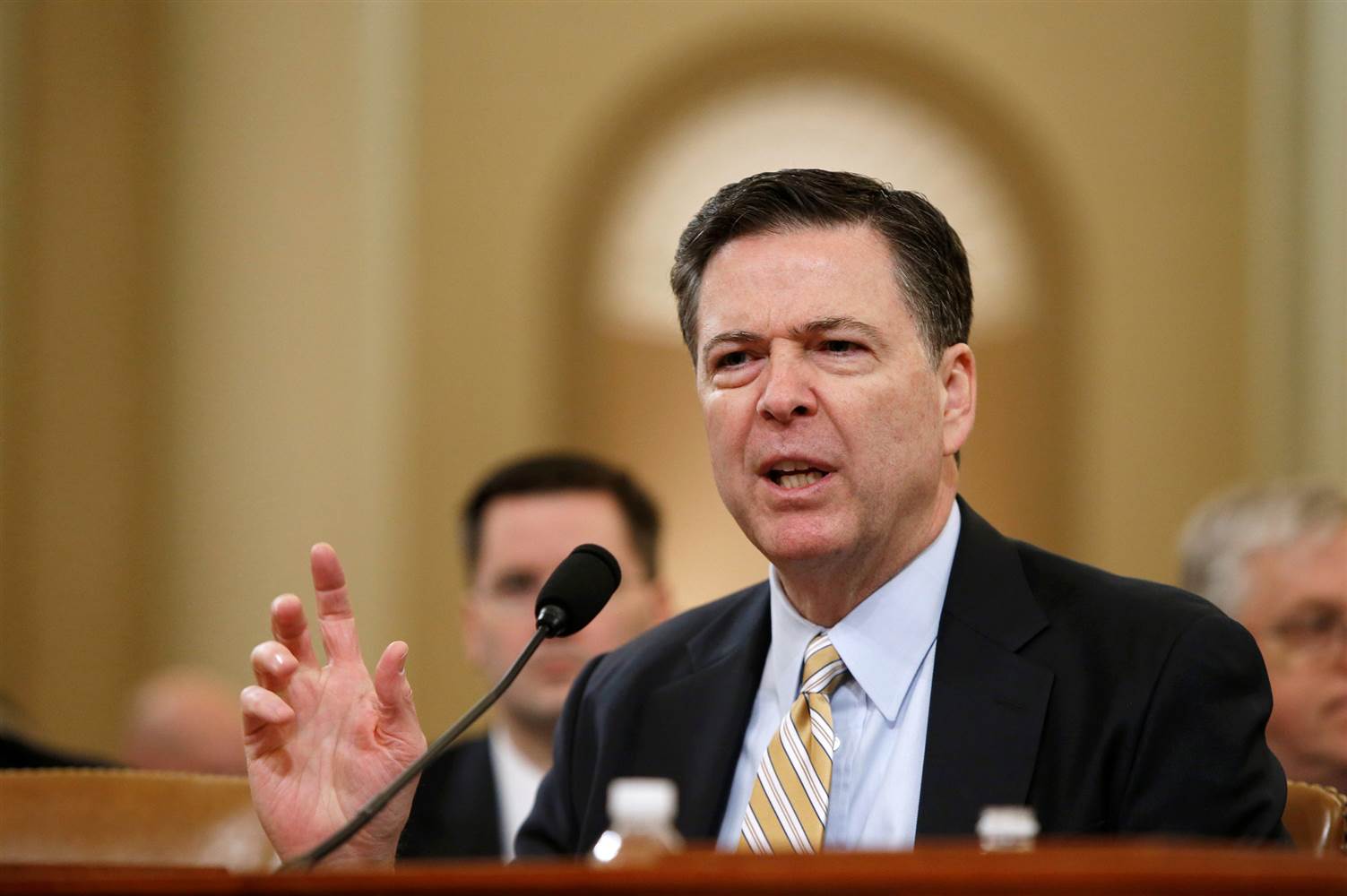 FBI Directory James Comey told a congressional hearing that the FBI is investigating Russian interference in the 2016 election and possible links between the Trump campaign and the Russian government — and whether there was any coordination, the New York Times reports.

Benjamin Wittes of the Lawfare Blog said this before Comey’s testimony this morning:  “A sure sign that the Russia Connection is not that big a deal is if Comey talks about it.  In [another scenario though], Russia is a very big deal. Comey, in other words, has significant investigative equities to protect and he believes that he needs to be there in order to protect them—in other words, that he has a responsibility to not get himself fired because of his anger about the Trump tweets (or anything else) because he has to make sure the investigation can proceed unimpeded. In this situation, I would expect him to be minimally verbal. He may have to answer yes or no questions in certain instances, including about the truth of the wiretapping allegations, but he will refuse to answer a lot of questions. He will make as little news as humanly possible. He will be exceptionally spare with his opinions. He will make a point of not antagonizing the President. Lots of people will leave disappointed.”

“If I were advising Trump, this is the scenario that would scare me most. We know, both from the hospital room testimony and from the Clinton email testimony, how Comey behaves when he feels at liberty to speak. We also know he’s angry right now and would presumably love a chance to defend the integrity of his agency and his agents. If he passes up that opportunity, I will read that as a sign that he is biting his lip very hard because there’s something more important at stake.”

And that’s what happened.  The latter scenario where Comey was minimally verbal.

Presidential historian Douglas Brinkley told the Washington Post that, “This is the most failed first 100 days of any president.”  Said Brinkley: “To be as low as he is in the polls, in the 30s, while the FBI director is on television saying they launched an investigation into your ties with Russia, I don’t know how it can get much worse.”

He added: “There’s a smell of treason in the air. Imagine if J. Edgar Hoover or any other FBI director would have testified against a sitting president? It would have been a mind-boggling event.”

Clinton campaign manager: Trump aides 'should be prosecuted for treason' if they conspired with Russiahttps://t.co/JoK7YFHAri pic.twitter.com/PCNFUACs87

Dan Rather: “If you are a praying person, today is a day to pray for the future of your country. I have seen a lot in my decades in the press, but I have never seen a day like this. This is a stress test for our democratic institutions and one can only hope that the system of checks and balances we hold so dear, can indeed hold.  The statements by FBI Director James Comey in testimony today about Russian interference in the 2016 election were jaw dropping.”

The house is on fire, Trump is running around with a box of matches, and the GOP demands to know who called the fire department.

Comey confirms that entities for *both* political parties were hacked in 2016, but only Democratic emails were released/disclosed, he says

President Trump’s credibility “came under fire during a marathon hearing on Capitol Hill featuring FBI Director James Comey, which could threaten the president’s ability to deliver votes on two of his most important goals: passing a new health-care law and getting Judge Neil Gorsuch confirmed as a Supreme Court justice,” the Wall Street Journal reports.

“The Comey appearance also threatens to further erode Mr. Trump’s job-approval ratings, possibly giving Republicans in more moderate districts an incentive to keep their distance from the president as the FBI investigation plays out.”

Mark Meadows said it's clear negotiations are OVER on ObamaCare repeal and it won't have the votes to pass Thursday.

Said Meadows: “After investing hours and hours and hours of trying to find common ground between our moderate members and conservative members, and believing, because of the White House’s engagement in the process, that we could find common ground; I’ve now reached a conclusion that our leadership is going to put forth a bill that does not address any of the concerns in a meaningful way and will dare us to vote against it.”

A new HuffPost/YouGov poll finds the public opposes the GOP health care bill by a 21-point margin ― 45% to 24% ― with 31% unsure.  The GOP plan also is on the wrong side of a significant gap in intensity, with just 5% strongly favoring the bill, and 32% strongly opposed.

Let this sink in.

The FBI is investigating the President of the United States for treason.

David Leonhardt: “The ninth week of Donald Trump’s presidency began with the F.B.I. director calling him a liar.”

“The director, the very complicated James Comey, didn’t use the L-word in his congressional testimony Monday. Comey serves at the pleasure of the president, after all. But his meaning was clear as could be. Trump has repeatedly accused Barack Obama of wiretapping his phones, and Comey explained there is ‘no information that supports’ the claim.”

“I’ve previously argued that not every untruth deserves to be branded with the L-word, because it implies intent and somebody can state an untruth without doing so knowingly… But the current president of the United States lies. He lies in ways that no American politician ever has before.”

Leon Panetta on wiretapping to @TODAYshow: "The time has come for the president to accept the responsibility that he made a mistake." pic.twitter.com/cMREba7AaV

“The Supreme Court confirmation hearing of Judge Neil Gorsuch is underway, but based on the statements of Democrats, one might think it was about the man who might have been: Judge Merrick Garland,” the New York Times reports.  “Democrats were always expected to highlight Republicans’ refusal to even meet with President Barack Obama’s nominee last year. But the frequency and ferocity of their attacks were notable out of the gate.”

President Trump will meet with GOP lawmakers at the Capitol tomorrow in an effort to convince his party to support the GOP proposal to repeal and replace the Affordable Care Act, the Washington Post reports.

“Trump’s visit to the Hill signals that GOP leaders and the president consider negotiations with key blocs of House members essentially complete. They hope to put the bill on the House floor by Thursday and then send it on to the Senate.”

With just less than 30 days until the special election to replace former Rep. Tom Price (R-GA), a new Clout Research poll finds that Jon Ossoff (D) is greatly solidifying his base of support and now leads the special election field with 41%.  Karen Handel (R) now only has a marginal edge over Bob Gray (R), as both effectively tie at 16%.

Politico: “Trump signed only one substantive piece of legislation since February 20, repealing a minor Obama administration rule that made it harder for the mentally ill to buy guns. Otherwise, in Month Two his impact on the laws of the United States consisted of renaming a veteran’s health clinic in western Pennsylvania and signing two symbolic bills about the importance of encouraging more women in science and technology fields.”

“His push to repeal Obamacare is stumbling on Capitol Hill; his budget seems dead on arrival; his revised travel ban, like the original, has been blocked by a judge. He made big splashes with executive orders purporting to roll back Obama-era environmental rules, but in reality they merely announced his desire to roll back those rules. He did fill four more slots in his Cabinet, but three slots remain empty, and below those headline jobs the vacancy problem in his administration is becoming extreme: Overall, according to the Partnership for Public Service, he has only filled 20 of the 553 key positions that require Senate confirmation—and has not even picked a nominee for 497 of them.”

Playbook: “With all the talk of last-minute changes to the House Republicans’ health-care bill, will the public know the true cost of the legislation? Will the Congressional Budget Office have the time to update the number of Americans uninsured, and the updated price tag, by Thursday’s vote?”

Rep. Henry Cuellar (D-TX) “said the Trump administration is gearing up for a fight over taking private land needed to build the president’s border wall — and Texas is likely to be ground zero,” the Texas Observer reports.  “This week, the Observer was the first to report that some landowners have already received condemnation notices they have vowed to resist. And in the proposed White House budget released Thursday, the Trump administration is asking for funding to hire 20 additional Department of Justice attorneys to pursue condemnations.”