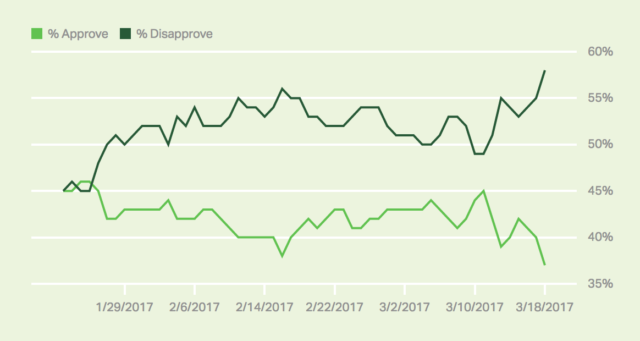 A few hours before FBI Director James Comey was scheduled to appear before a House committee about probes into Russia, President Donald Trump slammed coverage of his campaign’s ties to Russian officials as “FAKE NEWS” in a series of tweets.  The  ranking member of the House Intelligence committee, Rep. Adam Schiff (D-CA), did not rule out the possibility of collusion.  “I would characterize it this way, at the outset of the investigation. There is circumstantial evidence of collusion. There is direct evidence, I think, of deception,” Schiff said on Sunday. “And that’s where we begin the investigation.”

New York Attorney General Eric Schneiderman (D), “to date one of the most vocal antagonists of President Donald Trump, is preparing to escalate his office’s litigation against the president’s administration,” the Wall Street Journal reports.

Schneiderman “has hired one of the top public-corruption prosecutors under former Manhattan U.S. Attorney Preet Bharara to focus specifically on issues involving the Trump administration. Howard Master, who prosecuted the Manhattan U.S. attorney’s case against longtime New York state Assembly Speaker Sheldon Silver , is expected to work on both continuing and new White House-related matters for the attorney general, as well as on high-level public-corruption cases.”

Americans oppose the GOP health bill by a 21-point margin ―45% to 24%―according to a new HuffPo/YouGov poll https://t.co/KbkaUNHK9d pic.twitter.com/1oiEYQLBXv

“The Trump administration, under pressure from conservative lawmakers, appears increasingly open to changing legislation repealing and replacing Obamacare in order to placate the right — but that may guarantee at least this version of the bill is as good as dead the Senate,” CNN reports.

“The political calculation is setting off a domino effect on Capitol Hill.”

Washington Post: “Most members of President Trump’s Cabinet do not yet have leadership teams in place or even nominees for top deputies. But they do have an influential coterie of senior aides installed by the White House who are charged — above all — with monitoring the secretaries’ loyalty.”

“This shadow government of political appointees with the title of senior White House adviser is embedded at every Cabinet agency, with offices in or just outside the secretary’s suite. The White House has installed at least 16 of the advisers at departments including Energy and Health and Human Services and at some smaller agencies such as NASA.”

“When it comes to the Supreme Court nomination of Judge Neil Gorsuch, Senate Democrats appear to have two options: Get out of the way or get run over,” the New York Times reports.

“Senate Republicans’ enthusiastic backing of President Trump’s nominee ensures majority support even before the confirmation hearing begins Monday. But the Republicans also hope that enough Democrats are won over by Judge Gorsuch — or recognize the inevitability of his confirmation — that they join in efforts to head off an explosive showdown over a filibuster.”

“Should Democrats ultimately deny the judge the necessary backing to clear the way for an up-or-down vote, Republicans seem more than ready to take the potentially volatile procedural steps to eliminate the 60-vote threshold on high court picks and summarily install him over Democratic objections. In either case, Judge Gorsuch winds up on the Supreme Court, filling the vacancy created by Justice Antonin Scalia’s death in February 2016.”

FORGET BANNON VS. REINCE. Real tension in WH is over ascent of Dina and Gary, per most senior WH sources https://t.co/ssQj4r1uvm

Sen. Dianne Feinstein (D-CA) seemed to indicate “that she expects President Donald Trump may disqualify himself from office over potential constitutional breaches and conflicts of interest,” Politico reports.

“Surrounded by a group of mostly liberal protesters outside a Los Angeles fundraiser, Feinstein fielded a slew of questions on her feelings about what the left has alleged are Trump’s constitutional breaches, including one activist’s recitation of Trump’s potential conflicts of interest — from profiting off of his Florida resort, Mar-a-Lago, to winning trademarks in China.”

When asked, “How are we going to get him out?,” Feinstein replied, “I think he’s gonna get himself out.”

The Hill: “Republican leaders are aiming to move quickly on legislation to repeal and replace ObamaCare, with a vote by the full House slated for Thursday. But the plan faces a difficult path, with at least 16 House Republicans in opposition.”

“Assuming all Democrats vote against the legislation, GOP leaders cannot afford more than 21 defections in the House and two in the Senate.”

“Speaker Paul Ryan and President Donald Trump — those awkward, sometimes reluctant allies — face the biggest test yet of their unusual relationship as the House barrels toward a dramatic vote this week on repealing and replacing Obamacare,” Politico reports.

“The stakes could not be higher for either of them.”

“The success of the new president’s legislative agenda will hinge in large part on Thursday’s vote in the House… Failure would be a real blow to Trump, who has vowed over and over again to ‘repeal and replace horrible, disastrous Obamacare.’ It would damage the prospects of getting his other top priorities — from tax reform to funding his ‘beautiful wall’ — through a GOP-controlled Congress.”

Mike Allen: “The votes aren’t there yet, but a Republican lobbyist tells me Speaker Ryan had to be The Gambler: ‘It was either call the hand, or fold.’”

“A prudent president, facing multiple battles on legislative and other priorities that are crucial to his first-year success, would find ways to avoid needless controversy. Not President Trump. He’s doing exactly the opposite, and the credibility gap continues to grow,” the Washington Post reports.

“The latest illustration of the president’s incapacity to admit error came Friday at a joint news conference with German Chancellor Angela Merkel… Trump was following a playbook that has become standard for his White House, which is to duck, deflect and in all other ways do everything but acknowledge that there is no credible evidence for Trump’s original claim, tweeted out two weeks ago. Having made the allegation, the president has asked others to prove it. When the evidence points in the opposite direction, the White House prefers to look for questionable ways to support what Trump claimed.”

“The health care measure appears on track for a House vote this week, and the president, who planned a weekend of relaxation at Mar-a-Lago, his Palm Beach, Fla., club, is likely to receive a large measure of the credit. But it has also become clear that Mr. Trump, an agitator incapable of responding proportionately to any slight, appears hellbent on squandering his honeymoon,” the New York Times reports.

“Instead, he has sowed chaos in his own West Wing, and talked or tweeted his way into trouble, over and over again.”

“That was never more apparent than over the last week, when fresh questions about his refusal to release his tax returns and the blocking of his executive order sapped the spotlight from his efforts to build support for the health measure and even the unveiling of his first budget. Even more self-lacerating: his insistence that President Barack Obama had authorized surveillance on his 2016 campaign, a claim that continued unabated despite rebukes from Republicans, denials by the congressional intelligence committees and complaints from the British government, which demanded an apology after Mr. Trump’s spokesman suggested that one of its intelligence agencies had aided in the spying.”