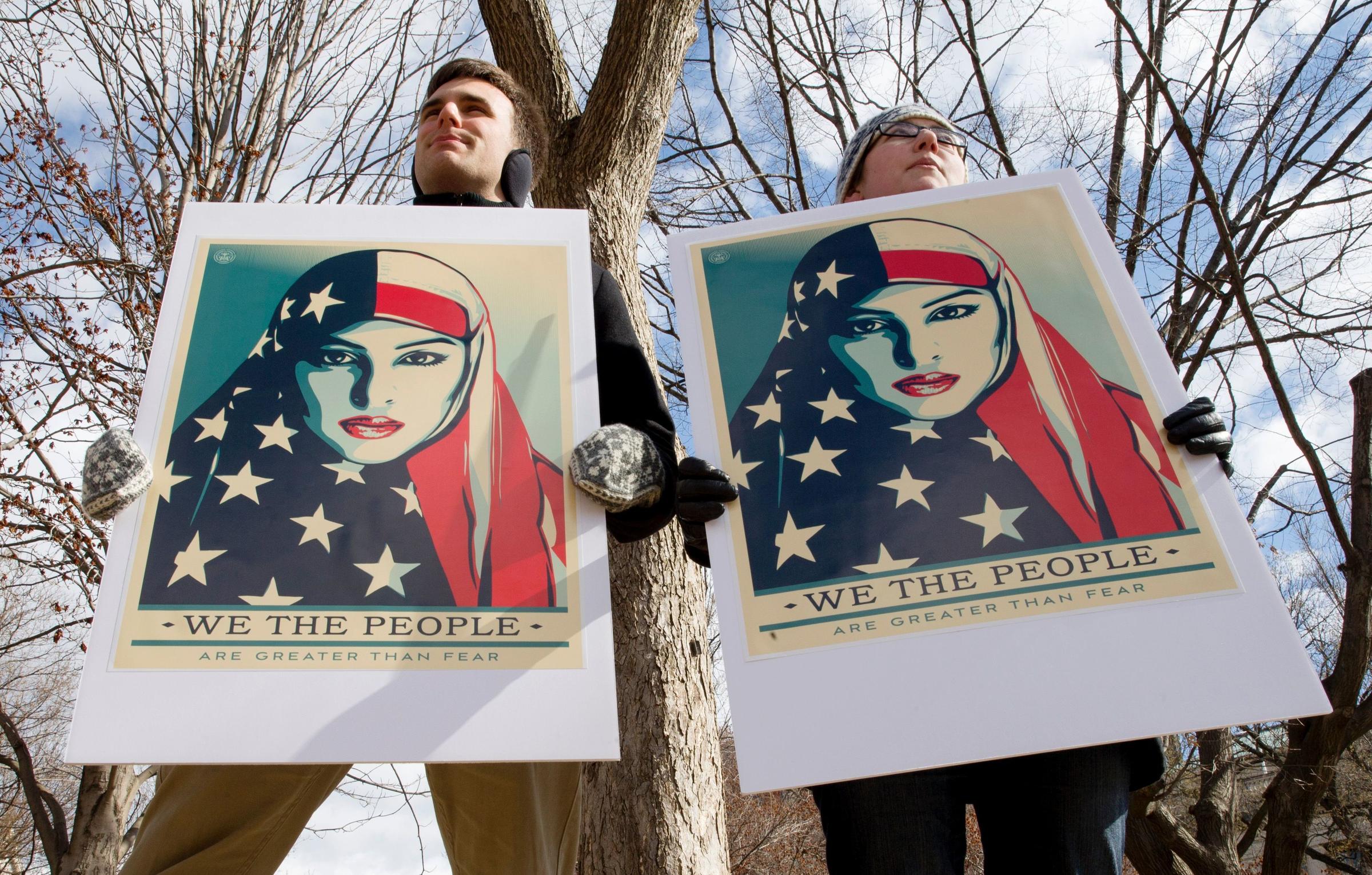 Less than six hours before President Donald Trump’s new-and-improved-but-still-the-same travel and refugee bans were set to go into effect, a federal judge in Hawaii has issued a temporary nationwide restraining order.  U.S District Judge Derrick Watson issued the order Wednesday blocking sections 2 and 6 of the revamped executive order, which refer specifically to the travel and refugee bans Trump has been hellbent on bullying through. Judge Watson concluded that “the executive order violates the Establishment Clause — because it discriminates against Muslims.”

According to the Washington Post, Watson’s opinion (the full text of which is here) used the Trump administration’s words as evidence against their case. In a scathing 43-page opinion, Watson cited statements from various press releases as evidence that the travel ban is indeed a Muslim ban.

“For instance, there is nothing ‘veiled’ about this press release: ‘Donald J. Trump is calling for a total and complete shutdown of Muslims entering the United States,’” Watson wrote. “Nor is there anything ‘secret’ about the Executive’s motive specific to the issuance of the Executive Order. Rudolph Giuliani explained on television how the Executive Order came to be. He said: “When [Mr. Trump] first announced it, he said, ‘Muslim ban.’ He called me up. He said, ‘Put a commission together. Show me the right way to do it legally.’”

And then President Trump went out on stage last night and gave the next court some more material to use in their opinions:

Trump: "I think we ought to go back to the first [ban], and go all the way. That’s what I wanted to do in the first place.” pic.twitter.com/ugR8cOIQIF

Lead Atty for Hawaii's travel ban challenge: This is Trump's 4th loss in federal court arguing for the ban. https://t.co/v8OE1YqSGN

By the way, that rally in Tennessee?

Once again, the outside protesters outnumber his inside Nashville rally. #babyhandsgoestonashville pic.twitter.com/XkvdMVMF5K

“When President Trump boarded Air Force One on Wednesday morning to travel to Michigan and Tennessee, he didn’t wing it alone: his entire senior West Wing staff traveled with him,” Politico reports.  “It’s a dynamic that’s been in place since Trump took office — wherever the president goes, the gang’s always all there with him.”  He needs to be babysat wherever he goes.

“The Liberal Party is projected to take 31 seats in the 150-seat lower house of parliament compared with 19 seats for the Freedom Party… Wilders’s party has to share second place with the Christian Democrats and centrist D66, both of which are also forecast to get 19 seats.”

Pres. Trump has been drawing a salary, despite pledging not to; WH says he plans to donate the money to charity https://t.co/MQLZDZouqW pic.twitter.com/nf4FLuzKFA

Speaker Paul Ryan said that his health-care proposal “must change to pass the House, marking a significant retreat from his earlier position that the carefully crafted legislation would fail if altered,” the Washington Post reports.

“The shift came after a private meeting of House Republicans from which Ryan (R-Wis.) emerged to tell reporters that his proposal to revise the Affordable Care Act would ‘incorporate feedback’ from the rank-and-file. Ryan attributed the change of strategy to the effect of an analysis issued Monday by the Congressional Budget Office.”

First Read: “You know things aren’t going well at the White House when the president would rather want to talk about his taxes than health care. And that brings us to what is still the biggest story American politics: The Republican’s health care overhaul efforts are unraveling.”

David Nather: “It’s going to be tough to satisfy all of the Republicans who have problems with the House Obamacare replacement bill — conservatives who want a faster end to Medicaid expansion, Republicans from states that want to keep their Medicaid expansion, and especially moderates who are rattled by the massive health coverage losses predicted by the Congressional Budget Office.”

“But don’t assume that’s the end of the road. Smart Republicans who were around for the passage of Obamacare, the mirror image of what Republicans are going through now, tell me there’s probably still a path to President Trump’s desk for something they can call repeal. Just don’t assume it’s going to look like this bill.”

Key takeaway: “Republicans can’t just give up on repeal after running on it in four elections.”

And the rest of the night of drinking:   A new Public Policy Polling survey finds just 24% of voters support the GOP health care bill as compared to 49% who are opposed.  Even among Republican voters only 37% are in favor of the proposal to 22% who are against it, and 41% who aren’t sure one way or another.

Rep. Devin Nunes (R-CA), the Republican chairman of the House Intelligence Committee who has been one of the few defenders of Trump’s claims, made clear that there is zero evidence to suggest Trump Tower was wiretapped, the Washington Post reports.   Said Nunes: “I don’t think there was an actual tap of Trump Tower.”  He added that if you are taking Trump’s tweets literally — which he said you shouldn’t do — then “clearly the president was wrong.”

New York Times: “Reid brought Elizabeth Warren onto the Democratic Senate leadership team in 2014, and she was one of the people he most trusted to keep the Senate caucus on its bearings through the difficult weather ahead. Shortly before Thanksgiving, he summoned Warren to the minority leader’s office. When she arrived, the room was littered with art supplies; on an easel was a half-finished portrait of Reid that would be unveiled at his retirement party the following month. Its subject was preoccupied with the future of the party to which he had dedicated decades of his life. Reid told Warren she needed to think seriously about running for president in 2020.”

Politico: “Here’s what happens when the U.S. pulls out of a major trade deal [like TPP]: New Zealand seizes the opportunity to send more of its milk and cheese to China. Japanese consumers pay less for Australian beef than for American meat. Canadians talk about sending everything from farm products to banking services to Japan and India.”

“Other countries are ready to rush into the vacuum the U.S. is leaving behind, negotiating tariff-cutting deals that could eliminate any competitive advantage for U.S. goods.”

“Kellyanne Conway isn’t even the only one who associates microwave ovens with government spying. ‘Is the CIA listening to me through my microwave oven, and through my TV, and through my cell phone,’ asked late-night host Stephen Colbert of former CIA and NSA head Michael Hayden last week. (The answer was ‘no,’ at least if you’re an American citizen.)”

“Still, it must be said: Microwave ovens are not an effective spy tool.”

Politico says the firings of the 46 U.S. Attorneys have created a great crop of new candidates : “McQuade was among more than 40 U.S. attorneys appointed by former President Barack Obama and let go by the president last week, an act that suddenly flooded the political marketplace with experienced federal prosecutors of the sort both parties love to tap to run for high office.”

“It’s a move that could come back to haunt the GOP. New York is buzzing with rumors about what’s next for Preet Bharara, the highest-profile of the former U.S. attorneys, who has been tipped for elected office in the past. Kenneth Polite, the former U.S. attorney for the Eastern District of Louisiana, resigned Friday and immediately reinvigorated talk of a run for state attorney general, mayor of New Orleans, or Orleans Parish sheriff.”

Rick Klein and Shushannah Walshe: “If this slice of an old tax return wasn’t leaked by someone in the close Trump orbit, it may as well have been, or someone wishes they had the idea, at least. What exactly do we know about President Trump – his finances, his business connections, his potential conflicts of interest – that we didn’t know before Tuesday night? He paid a pile of money to the government after making a really big pile of money in one particular year. He would have paid less to the government if not for the Alternative Minimum Tax. And, well, that’s about all that can be gleaned based on two pages of a 1040 from a dozen years ago.”

“Yes, what we don’t know is a reminder of why tax returns – the full documents – matter. Yes, the White House confirmation of authenticity explodes the myth that active audits have kept details of the president’s taxes from public scrutiny. But the cable hype and confirmation that the president did pay federal taxes, at least during one year in the middle of last decade, will only make it easier for Trump allies to argue that he is under unfair attack. ‘CLIENT COPY’ may be part of an elaborate scheme, or a huge clue, but the impact of this return is essentially the same.”

First Read: “But to us, the biggest news is: Who leaked these taxes to David Cay Johnston. And why? As NBC’s Ari Melber pointed out on “Today” this morning, only these people would have access to the tax return — Trump, his family, his accountant, or the IRS. Melber also noted that it is NOT illegal for an individual to release his or her own taxes to the public.”

“A culture of paranoia is consuming the Trump administration, with staffers increasingly preoccupied with perceived enemies—inside their own government,” Politico reports.

“In interviews, nearly a dozen White House aides and federal agency staffers described a litany of suspicions: that rival factions in the administration are trying to embarrass them, that civil servants opposed to President Trump are trying to undermine him, and even that a ‘deep state’ of career military and intelligence officials is out to destroy them.”