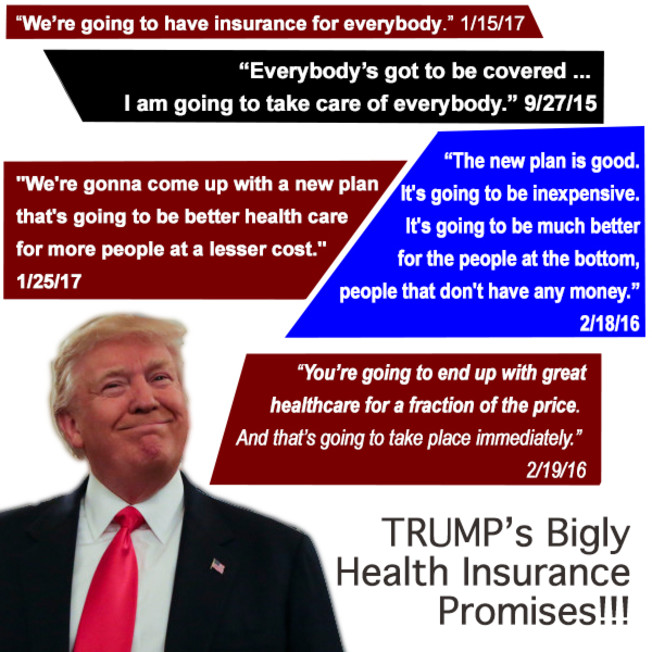 Josh Marshall rounded up the quotes. Share this image far and wide.

In DD’s open thread there’s this theory by Ezra Klein:

“Quietly, the idea that the House bill is designed to fail is percolating around Washington. I’ve heard it from a half-dozen people now. The law’s construction is shoddy. The outreach has been nonexistent. The hypocritical, hyper-accelerated process is baffling. Nothing about it makes sense.”

How does that work exactly? I understood how it worked when Republicans voted a gazillion times to repeal the ACA and then, when it failed, blamed Dems for its continued existence. But how would they spin it now? The GOP “Health Care” plan, if not passed, will be due to a Republican split. It’s R vs R. Dems are simply observers.

And their go-to can’t be “Dems need to help pass our plan”, unless every single Republican in the House and Senate votes for the AHCA (which is always possible). But… if Dem votes are needed due to Republican defection then the focus, and blame, lands directly on the GOP.

And I haven’t even touched on the promises made by Trump regarding what the GOP plan would look like and how it would cost so much less than the ACA while covering more people. Trump has been pretty clear on this point. In fact, this promise is right up there with his promise to build a wall that Mexico will pay for!

Let’s pretend for a moment that Trump voters actually voted for policies instead of racism, sexism, bigotry and homophobia. If even a fraction of that is true then here is what they voted for:

Other than the Muslim ban (which again is being challenged) he’s got nothing to show for all his talk – and neither do Republicans. What exactly are they doing in Washington, because they sure as hell aren’t passing bills to reflect these promises, which you’d think they’d be moving full steam ahead on accomplishing since, you know, they control all three branches of government and every day they dilly-dally weakens their chances of implementing their agenda. (But there have been 26 anti-abortion bills submitted, so there’s that.)

Has the GOP House and Senate decided to neuter themselves and let Trump legislate through executive order? So far, that seems to be the plan.