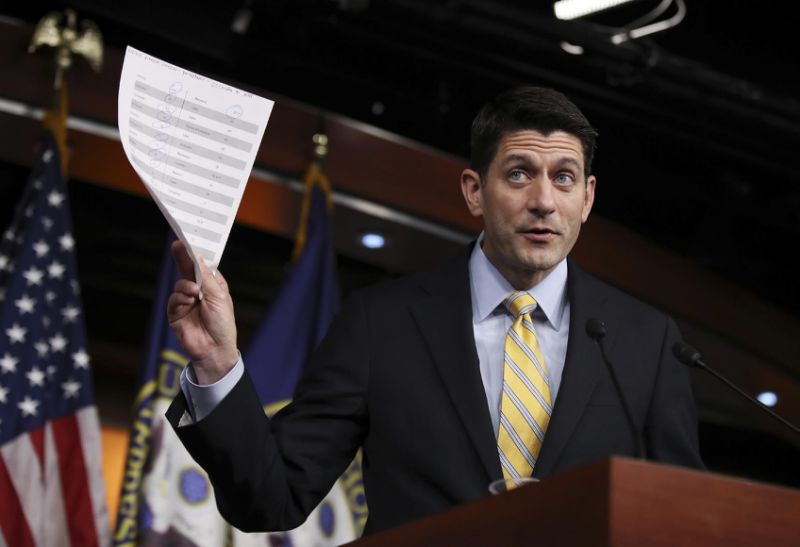 I stole that description from a podcast I was listening to recently, but that is exactly what came to mind when I heard the news on the GOP “replacement” bill this morning.  So here is a summary (via VOX):

Medicaid expansion would come to an end in 2020.  The thought being that all of these people who need insurance subsidies will have incomes that can support paying the full freight in 3 years.

Penalties for not having insurance would be eliminated, but insurance companies will be able to charge you a 30% premium if you have a break in your insurance coverage. So basically the penalty gets to be collected by the insurance company and they get to charge way more than the Government did.

The protections to older people from steep insurance premium increases is ended.  So that young people do pay less, but this bill lets insurance companies charge older people 5 times what younger people pay.

Tax credits are no longer income based — they are age based.  So that older people get larger tax subsidies than younger people, but these tax credits don’t offset the new ability of insurers to charge older people substantially more.

The CBO has not scored this yet, so no one knows its true costs or how many people would no longer be insured.

This bill defunds Planned Parenthood AND starts dismantling private insurance coverage for abortions.  Insurance plans that cover abortions will not be eligible for tax credits.  Got that?

So at first blush, we have a new bill that helps you if you are younger and wealthier.  And male.  If you are older or poorer, you are on your own.  Which is the usual GOP playbook, right?

I’ve heard this called Obamacare Light.  Which translates to me that they have fixed none of Obamacare’s issues and they certainly have not taken the opportunity to expand coverage for Americans.  This bill’s only success is that they repeal the taxes on the 1% that fund some of Obamacare, which I have maintained all along, is the real goal of the GOP here.  There’s no additional cost containment, but definitely some cost shifting — there aren’t many incentives for poorer people to maintain insurance which would mean that ERs become the treatment option of choice again.  And ERs will no longer get paid for this.

The GOP seems to have decided here that they could get rid of the tax on their rich friends, stick it to poor people, disadvantage women again and walk away.  They still have issues within their caucus on this — with some who still think that this maintains an entitlement and the others who will see that this screws over their voters.  And I suspect they know that the CBO news is not going to be good — they are planning to start moving this bill fast, probably to not have to deal with either the costs or the loss of coverage.

But it is pretty clear that the GOP doesn’t care about whether or not you have health care and they certainly don’t care if it costs too much.

23 comments on “The GOP ACA Replacement Strategy: Repeal and Go F*** Yourself”