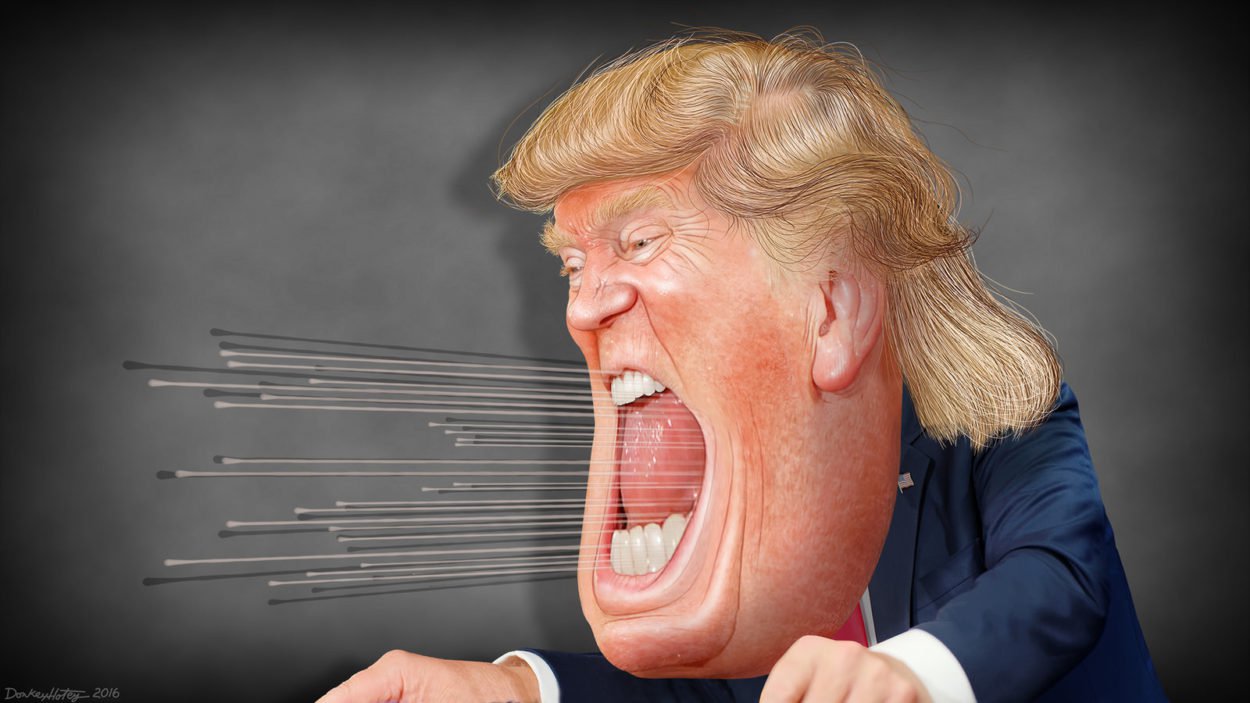 The wiretaps that President Trump tweeted about yesterday morning were first reported by Heat Street the day before the election:

Two separate sources with links to the counter-intelligence community have confirmed to Heat Street that the FBI sought, and was granted, a FISA court warrant in October, giving counter-intelligence permission to examine the activities of ‘U.S. persons’ in Donald Trump’s campaign with ties to Russia.”

The Guardian reported on them again just before the inauguration:

The Guardian has learned that the FBI applied for a warrant from the foreign intelligence surveillance (FISA) court over the summer in order to monitor four members of the Trump team suspected of irregular contacts with Russian officials. The FISA court turned down the application asking FBI counter-intelligence investigators to narrow its focus. According to one report, the FBI was finally granted a warrant in October, but that has not been confirmed, and it is not clear whether any warrant led to a full investigation.

If these wiretaps did occur — and Trump himself seems to have confirmed they did in his morning tweets — they were done with the approval of the FISA court. By confirming these reports, Trump has actually declassified this information and essentially guaranteed that no one can be punished for leaking it in the first place.  More important though, Trump reminded everyone that the FISA court approved warrants against his campaign based on espionage suspicions. That means the court had enough information to justify the wiretaps.

.@MalcolmNance on @amjoyshow on Trump tweets: "This is what happens when a target starts getting buggy, because he knows that he's caught." pic.twitter.com/y5z211LH46

Before heading off to his so-called “winter White House” in Palm Beach, President Trump summoned some of his senior staff to the Oval Office and went “ballistic,” senior White House sources told ABC News.  “The president erupted with anger over the latest slew of news reports connecting Russia with the new administration — specifically the abrupt decision by Attorney General Jeff Sessions to recuse himself from investigations into Russian meddling in the 2016 campaign.”

Politico: “The meeting on Friday got heated once it turned to the topic of Sessions. What, Trump wanted to know, was the logic of the move? The president made it clear he thought the whole thing had been handled poorly, and that Sessions shouldn’t have recused himself, according to sources familiar with the meeting. His exasperation was apparent.”

NYT: to obtain a wiretap, DOJ wld need gd evidence of a serious crime or that Trump was an "agent of foreign power" https://t.co/ZRmemv8lZs

Dan Rather took to Facebook yesterday to weigh in on the unpresidented occurrence of the current leader of the United States claiming that his predecessor wiretapped him, and how this and all that has led up to it should be dealt with:

It is understandable that Donald Trump’s twitter attack on President Obama early this morning would immediately be consumed by the churning political hurricane that is America today. The deepening divisions that are pulling at the fabric of our nation are on raw display. On one side we see understandable outrage, with many questioning the mental fitness of our Commander and Chief. On the other side we see Trump’s allies rallying under their shared hatred of our previous President. Perhaps it is my age or experience, but I feel no schadenfreude or eagerness to say, “I told you so.” I feel only a deep and abiding sadness. This is my country that I love with all my heart. We are a weakened nation, in our own estimation, and that of the world. If this was happening in some distant land, we would shake our heads and thank our lucky stars that we are Americans. But this nightmare is happening here, and we have no choice but to confront that disorientating truth.

My reporter’s instincts make me wonder at Trump’s actions. It has the feeling of a classic smokescreen. What is he hiding? Is this a kind of trap? Does he have something he is about to drop? Or does he know something else is about to drop on him and his administration, which is facing a withering crescendo of scandal?

We must carefully separate what we know to be true, from what we think to be true, from what we do not yet know. And in the early days of a story like this, what we do not know will far outpace the other two. […]  It is long past time that we have a complete and independent bipartisan investigation, especially since the director of the FBI is under such a cloud of political manipulation. Now is the time to breath the cool winds of impartiality and facts. We need statesmen of steady head and temperament, willing to put country ahead of politics. We cannot afford for our democratic institutions to be consumed by a bonfire of lies, innuendos, and conspiracy theories.

President Trump “is expected to sign on Monday a new executive order on his controversial travel ban at the Department of Homeland Security,” Politico reports.  “It is unclear how significant the changes to the current order will be or whether the White House will continue a court fight over its old order.”  This is odd: “Employees at DHS were instructed to work from home on Monday morning.”

A semi-serious argument wrapped in a troll headline: How the baby boomers destroyed everything https://t.co/yRKZUe2eQi

I believe the Baby Boomers will go down as the worst generation ever.    Even if it is a troll headline.

“State legislators across the country are debating new measures that would require candidates running for president to publicly disclose their tax returns to qualify for the ballot,” The Hill reports.  “Democrats, incensed by Trump’s false claims of being prevented from releasing the documents because of an IRS audit, see the legislation on the state level as a way to force the president’s hand when he seeks reelection in 2020.”

A spokesman for former President Obama released a statement on President Trump’s assertion that Obama ordered wiretaps of the Trump campaign:

Of course, the statement doesn’t deny that Trump’s phones were tapped only that the Obama White House didn’t order them.

Jeet Heer: “Trump is a paradoxical figure because he’s become an American king despite acting like a court jester. His became president not by emanating regal authority, but by name-calling against his opponents. Last May, writer Will Wilkinson astutely predicted how Trump would become president. “If this were a monarchy and Trump were taking part in a succession battle, he’d accuse his rivals of being secret bastards out of the line of succession,” Wilkinson wrote. “In America, ‘birtherism’ serves that function. Obama isn’t a legitimate president. Canadian Ted Cruz isn’t qualified to be president. Or Hillary Clinton deserves to be in jail, might even end up being in jail, so how can she be president? Etc. If you can’t directly undercut legitimacy like that, relentlessly ‘brand’ your opponent in a way that shows them to lack natural authority (‘little’ flop-sweat Marco, ‘low-energy’ Jeb, the listless Nancy) or sows questions about legitimacy (‘lyin’ Ted, ‘crooked’ Hillary).”

Because Trump was so successful at being the court jester, it’s hard to take him seriously as the president. But for many in the press, their entire raison d’etre is to cover the presidency. They are courtiers in search of a king, so they will leap to applaud any tiny “presidential” gesture that Trump makes.”

Every day this image gets sadder, funnier, better… and worse. pic.twitter.com/SmDHlKG7aO

Martin Longman brings up an very interesting point: Bernie may have faced the same deep state resistance as Trump:

However narrow Donald Trump’s victory was, he did win. And insofar as that gives him any kind of mandate, it gives him a mandate to do things a lot differently than they have been done in the past. What he didn’t anticipate is that he would be resisted and criticized for every radical alteration, and that he wouldn’t have the power to prevail and succeed if he didn’t build support within the power structures he was trying to change.

He’s only been if office for forty days, but he’s been taught this lesson daily. Right now, he’s staggering because his position on Russia and Vladimir Putin simply won’t be tolerated and isn’t seen as consistent with American interests or values. But the same fate met his travel ban. His effort to overhaul Obamacare is faltering because he can’t identify a plan and rally support around it. He has no path to passing his infrastructure bill because he’s alienated the Democrats and labor unions he’d need to get it passed. He seems to want to put the State Department in mothballs, but he will discover a big majority of the Senate won’t even consider going along with that. For such a short time in power, the list of these kind of failures is already long.

During the Democratic primaries, a lot of people wanted to know why I wasn’t supporting Bernie Sanders. To be clear, I did vote for him, but I really was voting for a delegate to the national convention. I didn’t think Sanders would actually be a successful president even though, on balance, I preferred his policies over what Clinton was offering.

The reason I didn’t think he’d be successful as president is because I didn’t think he had enough support among Democrats in Washington to lead them. And I didn’t think he had the personal skills to ever change that. He’d get sworn in and discover that his agenda was as dead as Obama’s had been after he lost Congress in the 2010 midterms, but he wouldn’t be able to keep his own party united behind him. He said we needed a revolution, but I thought his revolution would be dead on arrival.

Exactly.  It’s why I didn’t support Bernie from the start, even though I agreed with him on a lot of things