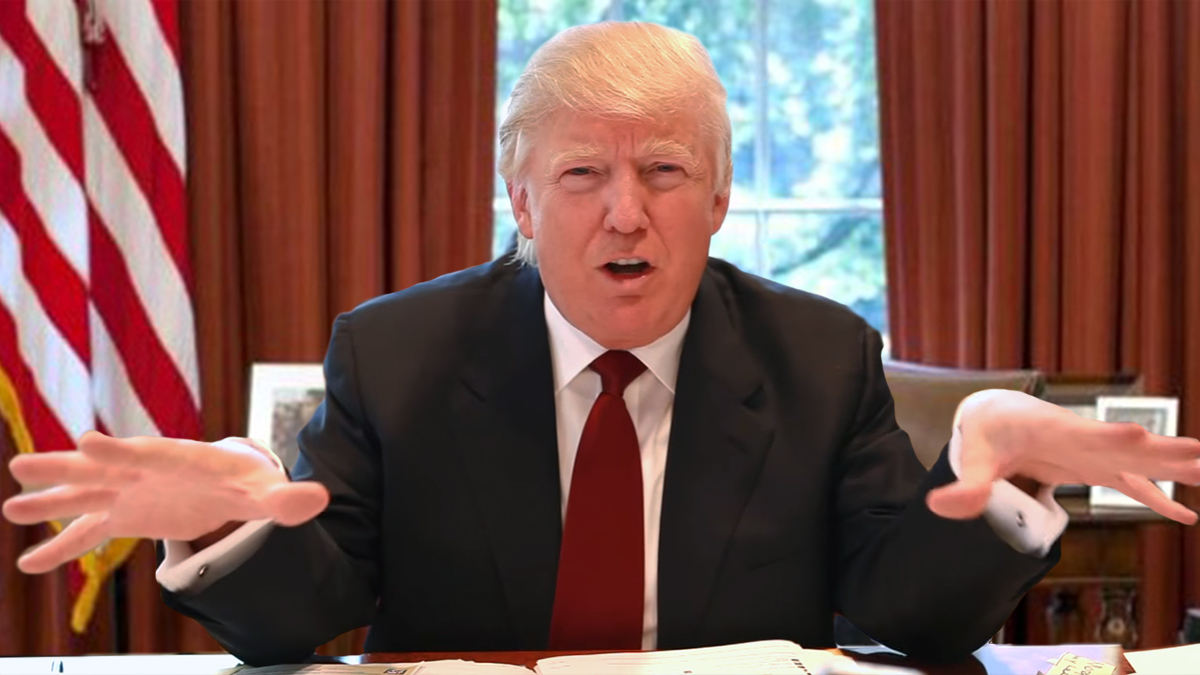 Andrew Sullivan on how Trump lies to undermine the news media: “And he lied, of course. And I don’t mean in the speech itself. He lied directly to the faces of the media muckety-mucks that afternoon, telling them that he was going to embrace some kind of immigration reform. For a few hours, much of the press duly reported this — until they heard the speech itself, which did no such thing. The lie, we were told, was a ‘misdirection,’ in order to get some favorable coverage from the media that afternoon.”

“But think about that for a minute. This wasn’t a trial balloon, delivered by some anonymous sources to see the impact of a potential policy. This wasn’t even a defensible fib, for national-security reasons. It was an outright lie from the president himself in order to delegitimize the press. If the New York Times or the evening news reports something completely untrue — indeed refuted just a few hours later — what happens to their credibility? Bannon is not kidding when he describes the free press as the opposition. For shameless demagogues, it always is. And this creepily authoritarian administration will happily lie to its face.”

Watch @chrislhayes pin down Carter Page into this 💯 A+ answer: “I will say that I never met [Sergey Kislyak] anywhere outside of Cleveland.” pic.twitter.com/L6Mqa3NnpS

That the Trump administration is actually considering this is simply deplorable.

Women and children crossing together illegally into the United States could be separated by U.S. authorities under a proposal being considered by the Department of Homeland Security, according to three government officials.  Part of the reason for the proposal is to deter mothers from migrating to the United States with their children, said the officials, who have been briefed on the proposal.   The policy shift would allow the government to keep parents in custody while they contest deportation or wait for asylum hearings. Children would be put into protective custody with the Department of Health and Human Services, in the “least restrictive setting” until they can be taken into the care of a U.S. relative or state-sponsored guardian.

That families are having to actually consider this is simply deplorable.

Parents who immigrated illegally to the United States and now fear deportation under the Trump administration are inundating immigration advocates with requests for help in securing care for their children in the event they are expelled from the country.   The Coalition for Humane Immigrant Rights of Los Angeles (CHIRLA) advocacy group has been receiving about 10 requests a day from parents who want to put in place temporary guardianships for their children, said spokesman Jorge-Mario Cabrera. Last year, the group said it received about two requests a month for guardianship letters and notarization services.

Sen. Sherrod Brown (D-OH) has asked the Treasury Department to evaluate whether President Trump and his family’s business associates and possible investors from Russia and other countries have violated U.S. laws against financing terrorism, money laundering and other illicit activities, the AP reports.  Brown said that Trump’s “refusal to disclose investments that create potential conflicts of interest raises concern for his international holdings.”

“The Trump administration is seeking to slash one of the government’s premier climate science agencies by 17 percent, delivering steep cuts to research funding and satellite programs,” according to a four-page budget memo obtained by the Washington Post.  The proposed cuts to the National Oceanic and Atmospheric Administration would also eliminate funding for a variety of smaller programs including external research, coastal management, estuary reserves and ‘coastal resilience,’ which seeks to bolster the ability of coastal areas to withstand major storms and rising seas.”

Trump was aggravated that Sessions wasn't more careful in his Senate answer.But his frustration was mostly w leakers https://t.co/sBAMMhxQqt

Reuters: “Current and former officials said that in a departure from past practice, access to a classified computer system at the White House has been tightened by political appointees to prevent professional staffers from seeing memos being prepared for the new president.”

“Washington career civil servants say the clampdown appears designed to try to limit the flow of information inside and outside government and deter officials from talking to the media about topics that could result in negative stories… Several officials in different agencies who spoke to Reuters on condition of anonymity said some employees fear their phone calls and emails may be monitored and that they are reluctant to speak their minds during internal discussions.”

David Brooks defines Trumpism: “The first thing we learned was that Trumpism is an utter repudiation of modern conservatism. For the last 40 years, the Republican Party has been a coalition of three tendencies [foreign-policy hawks, social conservatives, fiscal hawks]… Trump rejected or ignored all of them.”

“Trump’s speech … offered those of us who want to replace him an occasion to ask the big question: How in the 21st century should government unleash initiative and dynamism while also preserving order? Trump’s answer: Nationalize intimidation but privatize compassion. Don’t look to government to offer a warm hand; look to it to confront your enemies with a hard fist.”

Rick Klein and Shushannah Walshe say the new Muslim Travel Ban may be different: “Another week is slipping by without a revised travel ban – the same travel ban that, when delayed, the president claimed was critical for immediate national security. If and when that new order comes, it’s already looking significantly different – although the Trump White House is not and will not be admitting that.”

“For starters, one of the seven countries – Iraq – is coming off the list entirely, according to U.S. officials, apparently at the behest of several Cabinet secretaries who identified how problematic that stance is for relations with a close ally where there are military urgencies. And the idea that it may exempt all current visas holders from all of the countries listed is a major reversal. What started as a Muslim ban could end up being tighter restrictions on those coming from six predominantly Muslim countries, with current visa holders unaffected. Will the White House acknowledge initial errors in policy, or in judgment?”

Playbook: “Administration officials are running around town saying they will complete tax reform by August, but for now, top White House aides are in open war over a central component of an overhaul: the House GOP idea to tax imports instead of exports. Instead of deciding on a strategy internally and promoting it, the aides have been shadow boxing, expressing different opinions in private settings with reporters and business leaders.”

“Steve Mnuchin, the Treasury secretary who is in his first job in D.C., is publicly saying he is confident in having a comprehensive tax reform bill signed by August, which has elicited head shakes and chuckles all over town. There is no bill — or anything close — and many of the Treasury aides who would be working on tax reform aren’t even in place. Most people see early 2018 as a more likely target date, considering the president has promised health care repeal and replace, $30 billion in emergency spending, a border wall with Mexico, not to mention they need to lift the debt ceiling and fund the government. And the president’s budget — the key element in tax reform — is, for now, dead on arrival.”

Michael Gerson says forget the speech, look at the Budget: “The Trump budget outline is underdeveloped, compared with those of other presidencies; it leaves the trajectory of deficits unchanged; it imposes cruel and indiscriminate cuts in discretionary spending; it is cowardly, especially on the main drivers of future debt; it is injurious to elected Republicans who will risk the wrath of the Trump base in order to make rational budget choices; it is an indication of governing unseriousness and a preference for positioning over leadership.”

“But the speech was nice.”

Mike Allen: “I was chatting with a smart Republican about the White House’s Russia issues, and he said: ‘This is the rare case where the smoke IS the fire.’ What he meant is that even if the White House wound up being right that there’s no ‘there’ there (harder to see, with each day’s revelations), the warning signs and botched reactions and mounting questions have themselves become huge problems for the President.”

“So many of the players — by slow-rolling, obscuring or trashing the facts — have made it LOOK like they have something to hide.”

“Republicans close to the White House said events seem to be moving from the Distraction Zone to the Danger Zone. Democrats see that the scandal and investigative machinery that was used against them in the Clinton administration can now be cranked up to hobble this president, just as he heads into the months when he needs to be putting legislative points on the board.”

“Emails released to IndyStar in response to a public records request show Pence communicated via his personal AOL account with top advisers on topics ranging from security gates at the governor’s residence to the state’s response to terror attacks across the globe. In one email, Pence’s top state homeland security adviser relayed an update from the FBI regarding the arrests of several men on federal terror-related charges.”

Time: “Problems await Trump’s agenda at every turn. The Republican tax-reform plan has sparked a backlash from key GOP Senators, big-box retailers and powerful conservative advocacy groups with millions in ads at the ready. The plan to repeal and replace Obamacare faces a two-front revolt in the House, where some Republicans think the working replacement plan is too severe, while others believe it would permanently enshrine a new big-government entitlement. Even the plan to pour billions into the Pentagon is unlikely to happen while Republicans protect cherished programs in law enforcement, diplomacy and education.”

“As a business mogul, Trump has typically thrived amid chaos. But now that he’s President, the stakes are higher and the players far more difficult to manage. The Republican math for getting things passed remains unforgiving, prompting no less a figure than former House Speaker John Boehner to predict a quick end to GOP ‘happy talk’ about repealing and replacing Obamacare quickly.”

Lexington: “For all that certainty in the country at large, the president remains a figure of sphinx-like mystery to those trying to work out what his government is actually doing… The puzzle, then, is why so many Americans are so sure that Mr Trump is keeping his promises.”

“The solution lies in the president’s unusual relationship with his supporters. He was elected on grandiloquent pledges to ‘bring the jobs back’ and build a ‘great wall’ on the Mexican border that will stop people, drugs and crime. Those promises were really a commitment to be a champion for his supporters. Mr Trump can be hazy about what he plans to do because he is so clear about whom he represents: those he calls ‘forgotten’ Americans, defined as hard-working, law-abiding heartland folk. And every time the news shows him signing some executive proclamation, the image carries almost as much messaging-power as a bill that took years to pass.”