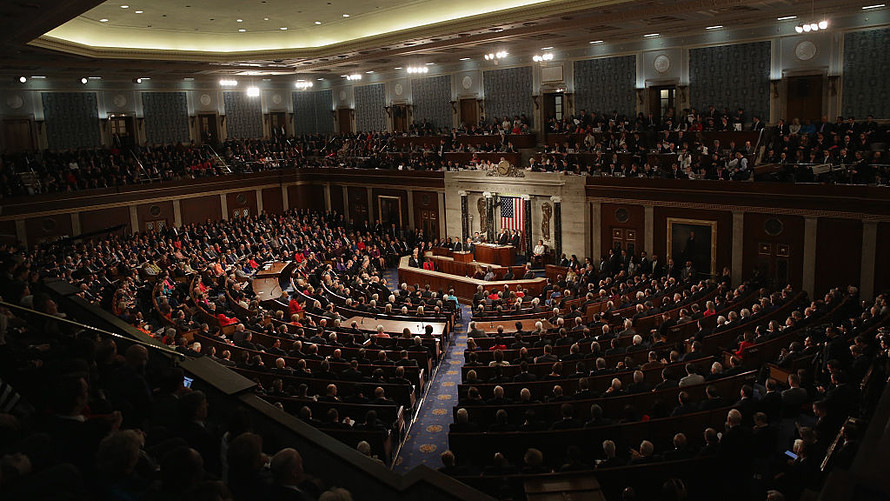 Ben Casselman: “Reviews of President Trump’s first address to Congress on Tuesday night seem to be converging around a single theme: It was Trump at his most subdued… And they’re right. In tone and style, Trump’s speech was relatively normal, at least judging it against his earlier efforts. He opened his address by condemning recent threats against Jewish community centers and the shooting last week of two Indian immigrants in Kansas City, something he had been criticized for not doing earlier. He called for unity and cross-party cooperation, and stayed away from attacks on the press or his political opponents. Apart from a few banal ad-libs, he largely stuck to his script.”

“But beneath the gentler tone, Trump’s speech — a State of the Union address in all but name — was quietly radical. He called for a complete overhaul of U.S. policy on taxes, trade, immigration and health care. He proposed spending billions more on defense and as much as $1 trillion on infrastructure. And he promised a new version of his controversial — and currently stalled — travel ban on visitors from seven majority Muslim countries.”

Hollywood Reporter: “President Donald Trump made his first big televised appearance from the U.S. Capitol on Tuesday night, addressing a joint session of Congress and blanketing the Big Four and the cable news networks for more than an hour.”

“The event predictably topped the night’s few other telecasts, grossing just more than 43 million viewers on eight networks airing coverage between 9 and 10:15 p.m. ET. On par with early metered market stats, a cumulative 27.8 overnight rating among households, it’s still a ways off from President Barack Obama’s first joint sessions meeting — or even his first State of the Union. Compared to Obama’s first address in 2009, Trump’s pull is down by 17 percent.”

Sen. Lindsey Graham (R-SC) said he wants all presidential candidates to be required by law to release their tax returns, starting in 2020, Politico reports.  Said Graham: “I think that prospectively what I’ll do is, any candidate running in 2020 needs to release their tax returns. You just make it a law.”  He then explained that the law would apply to Trump, “if he’s a candidate for president” in 2020.

If your agenda were on the brink of collapse after a month of protests, is this the address you'd give? My wrap. https://t.co/DzNX1Hl7gc

Julia Ioffe: “In the last week, I’ve spoken with a dozen current and recently departed State Department employees, all of whom asked for anonymity either because they were not authorized to speak to the press and feared retribution by an administration on the prowl for leakers, or did not want to burn their former colleagues. None of these sources were political appointees. Rather, they were career foreign service officers or career civil servants, most of whom have served both Republican and Democratic administrations—and many of whom do not know each other. They painted a picture of a State Department adrift and listless.”

“With the State Department demonstratively shut out of meetings with foreign leaders, key State posts left unfilled, and the White House not soliciting many department staffers for their policy advice, there is little left to do… The seeming hostility from the White House, the decades of American foreign-policy tradition being turned on its head, and the days of listlessness are taking a toll on people who are used to channeling their ambition and idealism into the detail-oriented, highly regimented busywork that greases the infinite wheels of a massive bureaucracy.”

Josh Marshall on his day after thoughts on the speech: “Taking the edge off the rhetoric, turning down the volume or speaking in an in-door voice does make a difference. There’s Trump’s policies, most of which are unpopular. Then there’s the gnashing, blood and soil, rhetoric in which he speaks of them – an angry and foreboding code which echoes the least lovely parts of his personality. This can and may well for the moment make a difference. Maybe we will see in retrospect that this was a fundamental break with the way the President has started in his presidency in its first weeks. But I doubt it. It’s the same policy, just with an “indoor voice” as this mysterious senior official puts it. It’s all the same.”

Washington Post: “An address to Congress is such an important speech that presidents generally are careful not to stretch the truth. The ‘16 words‘ in George W. Bush’s 2003 State of the Union address that falsely claimed Iraq’s Saddam Hussein sought uranium from Africa led to significant turmoil in the administration, including the criminal conviction of a top aide.”

“President Trump’s maiden address to Congress was notable because it was filled with numerous inaccuracies. In fact, many of the president’s false claims are old favorites that he trots out on a regular, almost daily basis.”

Politifact: “Beyond his soaring rhetoric were some exaggerations or misleading statements about the health of the Affordable Care Act, the cost of illegal immigration and the state of the economy. He also got a number of statistical claims correct, though he sometimes seemed to claim more credit than may be justified.”

Rick Klein and Shushannah Walshe: “It’s Republican unity, but it comes with a price. The laundry list has expensive items: paid family leave, health care tax credits, a sweeping tax cut, a big boost in military spending, and the trillion-dollar infrastructure plan. When Republican members of Congress were done applauding, those price tags started to make themselves known.”

“The ultimate cost may be the very unity the president was trying to purchase. Trump is still facing down a party with deep divisions on how to handle ‘repeal and replace’ Obamacare – something that was supposed to be the easy part of the Republican agenda. Trump has redefined what it means to be conservative, but only to an extent. Last night may be remembered as a high point for party unity, when it needs to be a starting point.”

Michael Gerson: “As the ideologist in Trump’s inner circle, Bannon is a practitioner of Newt Gingrich’s mystic arts. Take some partially valid insight at the crossroads of pop economics, pop history and pop psychology; declare it an inexorable world-historic force; and, by implication, take credit for being the only one who sees the inner workings of reality.”

“For Bannon, it has something to do with ‘the fourth turning,’ or maybe the fifth progression, or the third cataclysm. At any rate, it apparently involves cycles of discontent and disruption. Lots of disruption. Across the West, as he sees it, the victims of globalization — the victims of immigration, free trade and internationalism in general — are rising against their cosmopolitan oppressors. Institutions will crash and rise in new forms. And this restless world spirit takes human form in . . . Nigel Farage and Donald Trump.”

“Like many philosophies that can be derived entirely from an airport bookstore, this one has an element of truth. The beneficiaries of the liberal international order have not paid sufficient attention to the human costs of rapid economic change… But there is a problem with the response of economic nationalism and ethno-nationalism. It is morally degraded and dangerous to the country.”

Bloomberg: “In fact, it was no accident that the order was sprung without warning on a Friday afternoon. Trump’s chief strategist Steve Bannon arranged the timing in the expectation that opponents, freed from work on the weekend, would stage huge protests—drawing maximum attention and galvanizing Trump supporters as the president followed through on a controversial campaign promise, says a senior administration official.”

“The order did indeed spark nationwide demonstrations, but things veered off script from there, as the White House struggled to explain to law enforcement officials, federal agencies, and foreign governments what the hastily drafted document did and didn’t say.”

Rick Klein and Shushannah Walshe: “Of all the bubbling questions and potential scandals of the early Trump administration, the one that now appears likely to hold is about Trump campaign contacts with Russians. There are sufficient questions surrounding these communications to merit a serious investigation, many in Washington believe. There are also questions about whether such an investigation can be done independently inside the Justice Department considering White House attempts to influence reporting on the matter.”

“Now, with GOP Rep. Darrell Issa’s endorsement of appointing a special prosecutor, there’s enough political momentum to keep these questions swirling for a good long while. Issa’s opinion is big, since it opens the door for the question to be posed to any other Republican… Of course, he has a political motivation to show that leadership. But he is not likely to be alone in that realm.”

Politico: “Quietly — and pointedly refusing to attach their names to the musings — they talk about starting to look past the all over-70-years-old leadership team of Nancy Pelosi, Steny Hoyer, and Jim Clyburn in the House of Representatives. Some hope, wistfully, the three will step aside before the 2018 midterms to help send a message and generate new ideas. And as much as they like the idea of Chuck Schumer’s expanded Senate leadership team, they can’t help noticing how few of the body’s younger rising stars are included. They’re tired of Capitol Hill denizens staking their claim as the only leaders in the party, particularly as Trump’s political upheaval continues to echo throughout their ranks.”