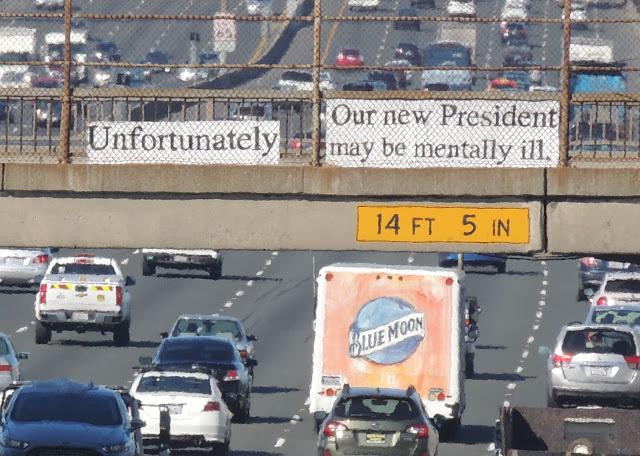 The California-based friend the Freeway Blogger is back. He writes:

“I was ALL SET to go on a trip around the world (friends in Thailand, Burma, India, Paris, Sao Paolo and Buenos Aires…) But NOOOOOOOO… You all had to go and elect Donald Trump…

We’ll see how it goes this time around – (maybe now people will be inspired to follow my lead a bit. Seriously, I’ve posted 7,209 signs since 2000. Talked to cops maybe a dozen times and never been arrested.) Any ideas on how to inspire people let me know… will keep in touch.”

He was famous during the Bush years of placing “Impeach” signs on overpasses on highways throughout the country. You can follow him on Twitter or at his blog.

President Trump “may rally Republicans on a strategy to repeal and replace Obamacare in his speech to Congress [tonight]. But the reality is his administration still has to contend with huge divisions within the GOP that have turned its top policy goal into a long and uncertain slog,” Politico reports.   “Republicans lack consensus on such basic questions as how much to spend to reshape the health system, how much financial help to give Americans to buy insurance and how to come up with the money to pay for it all.”

Martin Longman speaks for me: “Perez and Ellison are a team now, and that seems to have ruined the Pout Party some of Ellison’s more unhinged supporters had planned for this week.   As a progressive, I’m happy with the outcome and I don’t have any more patience left for folks who are more interested in fake fights than real ones.”  I completely agree.

Kellyanne Conway checks her phone after taking a photo of President Donald Trump and leaders of black universities, colleges in Oval Office pic.twitter.com/MgVhCoJFuC

This photo is like an SNL skit of Trump and Kellyanne.

Mike Allen: “Forget the theater, the palace intrigue, the stumbles. One thing you should know on Day 40 (and soon the 40th night) of President Trump is this: This a Bannon-Miller presidency in the making. Think about the dark view of the state of the world, of the state of our nation, of the state of media. This is the worldview of the Stephens — chief strategist Bannon and policy guru Miller — trumpeted by Trump.”

We see this in:

President Trump “has been dismissing the protests against his presidency and demonstrations at congressional town hall meetings across the country as concocted by his political enemies. But now he has an alleged culprit: Barack Obama,” the Washington Post reports.  Said Trump: “I think that President Obama is behind it because his people certainly are behind it. In terms of him being behind things, that’s politics. It will probably continue.”

New York Review of Books: “On February 27, 1933 the German Parliament building burned, Adolf Hitler rejoiced, and the Nazi era began. Hitler, who had just been named head of a government that was legally formed after the democratic elections of the previous November, seized the opportunity to change the system.”

“The Reichstag fire shows how quickly a modern republic can be transformed into an authoritarian regime. There is nothing new, to be sure, in the politics of exception. The American Founding Fathers knew that the democracy they were creating was vulnerable to an aspiring tyrant who might seize upon some dramatic event as grounds for the suspension of our rights. As James Madison nicely put it, tyranny arises ‘on some favorable emergency.’ What changed with the Reichstag fire was the use of terrorism as a catalyst for regime change. To this day, we do not know who set the Reichstag fire: the lone anarchist executed by the Nazis or, as new scholarship by Benjamin Hett suggests, the Nazis themselves. What we do know is that it created the occasion for a leader to eliminate all opposition.”

“President Trump’s proposal to slash domestic spending in order to preserve the two biggest drains on the federal government — Social Security and Medicare — has set up a battle to determine who now controls the Republican Party’s ideology,” the New York Times reports.

“The outcome could map the course of major challenges to come, including a revision of the tax code, a huge increase in infrastructure spending and any effort to balance the budget.”

“Mr. Trump’s budget blueprint — which is expected to be central to his address to Congress on Tuesday night — sets up a striking clash with the House speaker, Paul D. Ryan, who has made a career out of pressing difficult truths on federal spending. For years, Mr. Ryan has maintained that to tame the budget deficit without tax increases and prevent draconian cuts to federal programs, Congress must be willing to change, and cut, the programs that spend the most money — Social Security, Medicare and Medicaid.”

From Politico:  “Congressional Republicans on Monday panned Donald Trump’s call to finance a military buildup by slashing domestic agencies and ignoring entitlement programs — undermining the president’s budget even before it’s been finalized,”  reports.

“The consternation spanned the party’s ranks just one day before Trump addresses Congress for his first time Tuesday evening: House GOP fiscal hawks said it was ludicrous to think they’d pass a budget that did not address ballooning costs in Medicare and Social Security, the main drivers of the national debt. Pragmatic-minded GOP appropriators scratched their heads over where Trump would siphon off $54 billion in domestic cuts. And GOP defense hawks said the Pentagon budget boost doesn’t go nearly far enough.”

“Last month’s deadly commando raid in Yemen, which cost the lives of a U.S. Navy SEAL and a number of children, has so far yielded no significant intelligence,” U.S. officials told NBC News.   “A senior Congressional official briefed on the matter said the Trump administration has yet to explain what prompted the rare use of American ground troops in Yemen, but he said he was not aware of any new threat from al Qaeda in the Arabian Peninsula, the al Qaeda affiliate that was targeted.”

Mickey Edwards: “Instead of three equal, independent branches, each a check on the others, today’s federal government is, for practical purposes, made up of either two branches or one, depending on how you do the math. The modern presidency has become a giant centrifuge, sucking power from both Congress and the states, making de facto law through regulation and executive order. Yet the growing power of the executive is not merely a case of presidential power lust. For decades, the Supreme Court has consistently held that on most policy questions, foreign as well as domestic, statute trumps fiat. But if Congress subordinates its constitutional duties to political concerns, what then?”

“Presidents have managed to accumulate such a prominent place at the top of what is now increasingly a pyramid rather than a horizontal structure of three connected blocks because for more than a generation, Congress has willingly abandoned both its constitutional responsibilities and its ability to effectively serve as a check on the executive even when it wishes to do so.”

Edward Luce: “He was supposed to be leading a revolt against America’s elites. In practice Donald Trump is laying out a banquet for their delectation. The Trump White House is drawing up plans for across-the-board deregulation, tax cuts and a new generation of defence contracts. The only question is at what speed.”

“In contrast, Mr Trump’s middle-class economic plans, such as they were, are already receding. The chances of a big infrastructure bill are rapidly dimming. In marketing they call this bait and switch. The effect of Mr Trump’s economic agenda will be to deepen the conditions that gave rise to his candidacy.”

“With President Trump now vowing to put forward a replacement for the Affordable Care Act in March, some California politicians and healthcare advocates are once again promoting the idea of a state-run ‘single-payer’ system that operates like Medicare,” the Los Angeles Times reports.  “Backers say the uncertainty surrounding Trump’s promise to repeal Obamacare presents California with a chance to rethink how healthcare is delivered to its 39 million residents.”

“In a single-payer system, residents would pay into a state agency that essentially functions as an insurance company. The agency would pay doctors and hospitals when people sought treatment.”