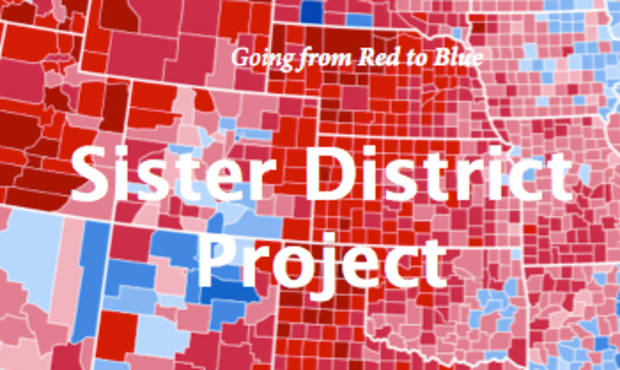 This is a brilliant idea!

Last fall, Rita Bosworth, a public defender in San Francisco, had an epiphany. “I was thinking about how we were choosing between two Democrats for this open Senate seat,” she said. Because California’s open primary system leaves the possibility that two members of the same party will advance to the general election, state Attorney General Kamala Harris faced off against Rep. Loretta Sanchez in the race to succeed retiring Democrat Barbara Boxer. They combined to spend nearly $20 million on the contest, which Harris won, and “all of it was being directed toward a race where it was liberal vs. more liberal,” Bosworth says. “It just struck me that this was silly.” There had to be a better use of progressive manpower.

So in late November, Bosworth launched Sister District, a website that helps activists in safe blue areas support candidates in red states and swing districts who could use the help. Sister District, which boasts about 5,000 members and has been recruiting at anti-Donald Trump protests and on social media, is in the process of filing for tax-exempt status as a 527, allowing it to raise money and donate directly to candidates for state office. It recently joined forces with another organization with a similar agenda, Flippable, on a race they hope will demonstrate the power of the suddenly energized grassroots left: a special election for a Delaware state Senate seat that will determine the balance of power in the state Capitol.

The two groups have already raised more than $87,000 for the Democratic candidate, Stephanie Hansen—a remarkable sum for a state Senate special election in a small market. Sister District members have held five fundraisers, and they have another one planned later this month at a bar in San Francisco’s Mission neighborhood.

I’m heading over to donate. You should too! This really is a fantastic idea.