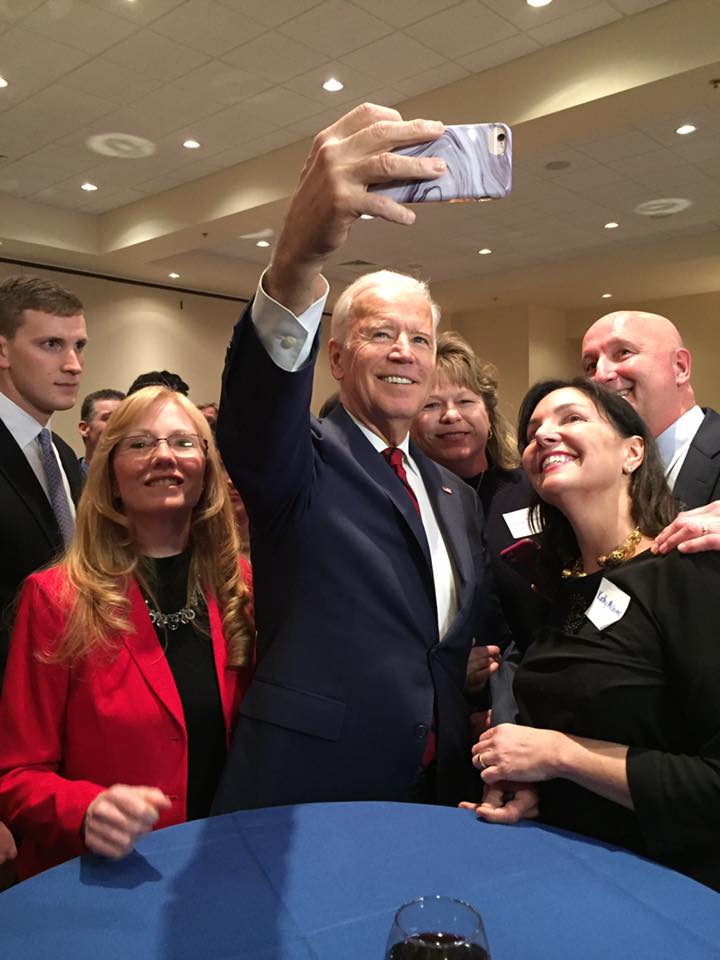 Remember when the rumors were swirling that Vice President Mike Pence was going to be campaigning for Republican John Marino in the special election in the 10th Senate District to replace the now Lt. Governor Bethany Hall Long.  Well it turns out that a Vice President did show up.  Vice President Joe Biden.

“This woman gets it,” Biden said, putting an arm around Hansen on a campaign stage Monday night. “The action for the next two years to defend the rights of working people, the rights of women, the rights of minorities, the rights of LGBT people, people counting on Medicaid, they are going to have to be defended and protected by the states. And people like Stephanie are the ones who are going to do it.”  […]  Biden said Hillary Clinton lost November’s presidential race by a mere 173,000 [actually 88,000] voters in a handful of states. The way to prevent that kind of loss, he argued, is to make sure Democrats get back to their middle-class roots. “We’ve got to get back to talking about this again, that ordinary people can do extraordinary things given an even chance,” Biden said. “[Hansen] gets it, you get it, we Democrats get it.”

Hansen and the Democrats clearly have the momentum in this race, as they have successfully translated the anti-Trump feeling in the Democratic Party into support for her.  Her campaign and the PAC supporting her, First State Strong, have raised a good amount of money to be competitive in this race.  Friends of Hansen (Hansen’s campaign organization) reported $81,107.00 in receipts as of January 20, 2017, though the campaign has surely raised much more than that since several fundraisers have held since then.   The PAC, First State Strong, has spent $186,000, according to the News Journal.

The PAC’s existence has drawn the hypocritical fire of GOP Chairman Charlie Copeland and John Marino, who allege that the PAC and the Hansen campaign are improperly coordinating their activities.  Without any evidence to back up his allegations, Copeland has filed a complaint with the Commissioner of Elections.

“We will not know who paid for these ads until January 20, 2018 at the earliest, but I can guarantee that they’re being coordinated with the Hansen campaign,” said Copeland. “And the Elections Commissioner is duty bound to investigate this shadowy PAC and find the truth. It’s time for these people to reveal who is trying to buy this election and Stephanie Hansen should be demanding this information be released publicly instead of trying to ride a wave of secret money into office.”

Hansen’s campaign manager, Erik Raser-Schramm, said in an e-mail that Copeland’s accusation of illegal collaboration is “absurd on its face.”

“Cycle after cycle, Charlie Copeland and John Marino shamelessly hurl accusations for which they have no evidence,” Raser-Schramm wrote. “Copeland and Marino are constantly picking these partisan fights, while Stephanie is out fighting for working families, higher wages, and our kids’ success at school. Voters will see the difference.”

I suspect Copeland’s complaint will either be quietly withdrawn or tossed after the election.  Copeland and Marino are just upset that their rumors of a Pence visit have not come to fruition.  And that old rule still applies: if you are complaining to the refs, you are losing.