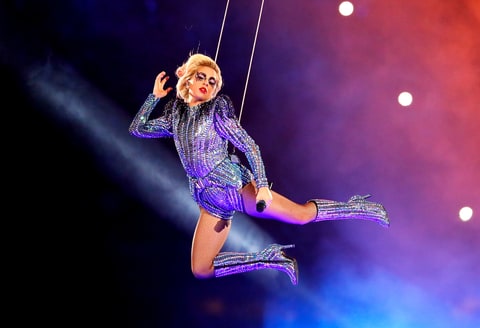 Okay, now that you’ve read it, here are some of my favorite excerpts (I’d post every word, but fair use holds me back!):

These takes miss so much buried in Gaga’s performance. Clear and blunt protest is a necessary part of any political movement, but it is not the only way to act politically and to make a point. What those who reject the political nature of her act fail to see is that some of the best political art is often subtle in nature.

The best political art also gets people nodding their heads. In my opinion, Lady Gaga accomplished this.

Standing on top of NRG Stadium in Houston, Texas, Gaga opened by singing “God Bless America” before transitioning to “This Is Your Land”, a move that actually traced the history of the folksy Woody Guthrie song, which he wrote as a progressive, inclusive alternative to “God Bless America” during the height of War World II.

We’re just weeks into a Trump presidency that is rooted in a campaign that demonized immigrants and Muslims and got its start in Washington with a ban on immigrants and refugees from Muslim-majority countries. It’s difficult to claim that the choice of a song that highlights an America that welcomes everyone—and that protesters across this country have been singing over the president’s first two weeks—is purely a coincidence.

No way was this a coincidence. There was a strong message here – a protest message rooted in history.

In singing her hits, Gaga only included portions of each song, requiring her to make decisions on which parts to cut and which to include. While it is no surprise that Gaga performed her hit “Born This Way,” which has become an anthem of sorts for the lesbian, gay, bisexual, transgender and queer (LGBTQ) community, the portions of the song she chose to sing were telling.

Skipping over lyrics, she ended with the chorus that celebrates diversity, including LGBTQ people. Performing at the halftime of a game attended by one of the nation’s most notorious anti-equality politicians, Vice President Mike Pence, Gaga belted:

No matter gay, straight, or bi

I’m on the right track baby

I was born to survive

No matter black, white or beige

Chola or orient made

I’m on the right track baby

I was born to be brave.

Choosing to include those lyrics sent a strong message. It wasn’t an accident. It wasn’t an in-your-face Kanye message – which is a good thing, but it was strong and made no apologies.

Thanks to Sarah McBride for writing such a great piece!