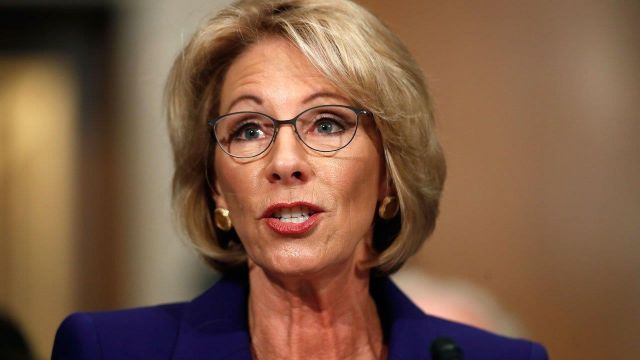 I have written about how choice, charters, magnets and vouchers are simply a way to hurt and avoid funding public schools many, many times. These “choices” not only hurt public schools they hurt the children that attend them.

The takeaway is clear — money matters. You have it and you can get away with shoddy work, no matter the costs to others. If you don’t have it you will be blamed for your individual failings, held accountable.

It is this same type of blaming and shaming logic that underpins DeVos’s policy priorities as well — the use of school vouchers and the expansion of unregulated charter schools.

DeVos, like the man who chose her for the position of secretary of education, believes students should not be “trapped in failing schools.”  She promises to spring the trap by giving them tuition vouchers to attend a school of their choosing.

If they fail to choose well, the onus is on them. Nevermind that the vouchers will never be enough to cover the tuition costs of elite private schools, or that schools of the sort her children attended may not want low-income students with vouchers.

That’s the voucher lie. Vouchers will not cover the cost at elite private schools, so get ready for all new “Voucher Schools” to spring up. These schools will willingly accept vouchers. Voucher money will be there sole reason for being.

Voucher money will also be heading to religious schools. How we’ll balance the receiving of public funds with religious dogma escapes me, but using public funds for private business seems all the rage.

And there’s a plan to offer them to everyone. Take a look at Arizona.

School “choice” is a scam.

It’s a euphemism used by lawmakers who want to gut the state’s public school system and hand over taxpayer money to affluent families.

Leading the charge in this legislative session is Republican Sen. Debbie Lesko. She introduced Senate Bill 1431, which would make all Arizona families eligible for Empowerment Scholarship Accounts. Essentially, these are vouchers that for most families would amount to about $5,000.

Senate Bill 1431, which would make all Arizona families eligible for Empowerment Scholarship Accounts.

So who will that 5,000.00 benefit? It won’t be poor children. But don’t worry, all those new Voucher Schools will pop up to serve them. And you know they’re coming – just like all those fly-by-night charters that keep springing up. Cash in quick, baby! Meanwhile, people who can already afford private school will be receiving a cool 5 grand.

Voucher programs and charter school expansion drain both money and social capital from the traditional public schools, creating even more of an imbalanced, two-tiered system.

More insidiously, these policies let politicians and taxpayers, who do not want their tax dollars redirected to the “inner city”, off the hook from having to invest money in upgrading neighborhood schools in low-income communities.

These schools can continue to crumble, to poison teachers and students, to find themselves unable to afford the textbooks that are aligned to the state tests, because if the kids remain in these schools, under a voucher system, it’s their own damned fault.

What’s infuriating is how often the word “choice” is tossed around. And pay attention to those tossing it out there. These are people with means. They own cars, have jobs that enable them to drop off and pick up their kids from “choice” schools, make enough money that 5,000.00 would let them attend a 15,000.00 school, etc. These are not people living in remote rural areas with one public school – people who watch their school’s funding decrease due to all this supposed choice. Guess that’s their own damned fault too.

8 comments on “Betsy DeVos and the GOP’s Educational Plan: Survival of the Wealthiest”