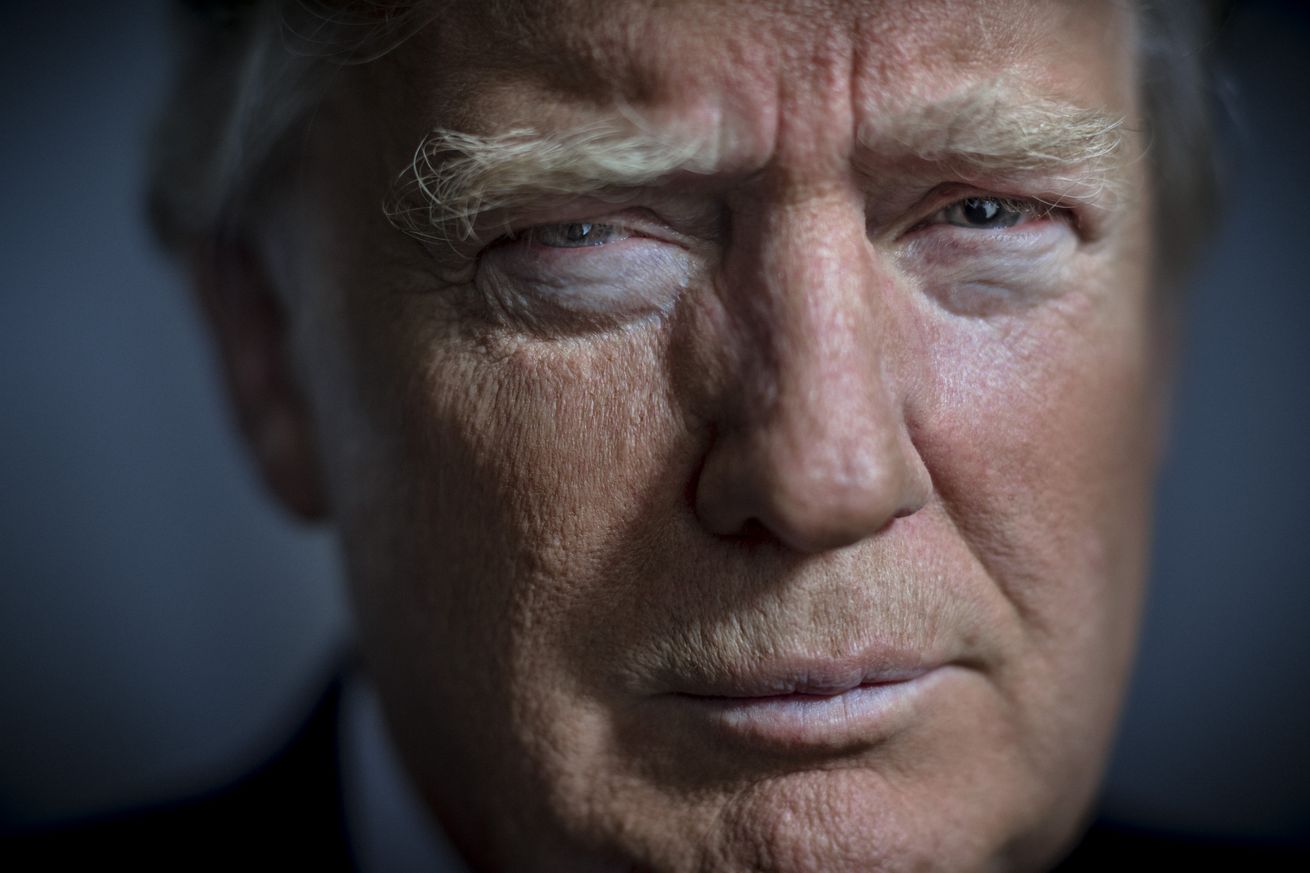 It’s been two weeks since Donald Trump’s inauguration, and the new President’s work so far hasn’t impressed the American people.  A majority, 53%, disapprove of the way the President is handling his job, according to a new CNN/ORC poll, marking the highest disapproval for a new elected president since polls began tracking those results. Trump is the only President to hold a net-negative rating this early in his tenure.

Overall, 44% approve of the way he’s handling the job, seven points below the previous low-point of 51%. Further, the share who disapprove “strongly” of Trump’s work as president is nearly as large as the total block who approve, 43% feel intensely negative about Trump. Partisanship is the sharpest divider in opinions on Trump (90% of Republicans approve vs. 10% of Democrats).  The poll also found that most Americans oppose the travel restrictions put in place by Trump’s executive order last week.  A majority, 53%, say they oppose the order.  Fifty-five percent say they see it as an attempt to ban Muslims from entering the US. Further, 6 in 10 oppose Trump’s plan to build a wall along the border with Mexico.

Tens of thousands of visas belonging to foreigners from seven predominantly Muslim countries have been provisionally revoked following President Donald Trump’s executive order restricting travel by people from those countries to the United States. The exact number of revoked visas remain unclear. An attorney representing the US government said in a Virginia court on Friday that more than 100,000 visas had been revoked, to the shock of many in the courtroom. But the State Department later disputed the numbers, claiming that fewer than 60,000 visas had been revoked.

One of the many shocking new covers that capture how many feel about this moment. -JR Staff #donaldtrump #derspiegel #news #politics #democracy

“The House of Representatives approved its first effort of the new Congress to roll back gun regulations, voting to overturn a rule that would bar gun ownership by some who have been deemed mentally impaired by the Social Security Administration,” USA Today reports.

“The House voted 235-180 largely along party lines Thursday to repeal an Obama-era rule requiring the Social Security Administration to send records of some beneficiaries to the federal firearms background check system after they’ve been deemed mentally incapable of managing their financial affairs.”

Josh Marshall:  “Resistance to Trump and anti-Trump activism is a critical precondition of turning back to Trumpite tide. But it is not a sufficient one. I appear to be considerably more confident than a lot of other people I know that Republicans may face a big electoral backlash in 2018. But if it happens it will happen because of grassroots organizing in red states and the red parts of blue states. The cities are already overwhelmingly Democratic. The fight is really outside the major cities. Nor is it just geographical. Trump’s power will be broken most on issues like health care – some mix of Medicare, Obamacare repeal, etc. These are issues that cut across the urban/rural divide.  […]

Put me down as a gravity believer. I think the White House and the entire GOP are setting themselves up for a 2018 reckoning. But it won’t happen automatically. It requires activation of the Democratic base, which is already happening with dramatic speed. Just as much it requires cutting into the non-big city territories with specific messages which divide Trump from his voters or potential voters.

We hear people constantly saying ‘Nothing will change his supporters’ minds. They’re with him no matter what.’ First of all this is enervating defeatism which is demoralizing and loserish. But it also misses the point. It is factually wrong. For the supporters those people have in mind, they’re right. They’re true believers, authoritarians who are energized by Trump’s destructive behavior. But there are not that many of those people. A big chunk of Trump’s voters voted for him in spite of their dislike. Those people can be carved away. But Democrats will regain power by winning it in what amount to our 21st century internal American borderlands, not in the big cities or rural areas mainly but in between. So what’s happening now to lay that groundwork for 2018?”

“When the president-elect’s son, Eric Trump, jetted to Uruguay in early January for a Trump Organization promotional trip, U.S. taxpayers were left footing a bill of nearly $100,000 in hotel rooms for Secret Service and embassy staff,” the Washington Post reports.

“The Uruguayan trip shows how the government is unavoidably entangled with the Trump company as a result of the president’s refusal to divest his ownership stake. In this case, government agencies are forced to pay to support business operations that ultimately help to enrich the president himself.”

Meanwhile, “President Trump’s trip to his luxury resort in Mar-a-Lago this weekend could saddle taxpayers with a bill upwards of $3 million and is already drawing the type of scrutiny Trump and other Republicans regularly heaped upon former President Barack Obama,” Politico reports.

Huffington Post: “His first two weeks have been the equivalent of a political sugar rush, repeated on a daily, sometimes hourly basis. It’s left government officials both invigorated and exhausted. It’s overwhelmed staffers on Capitol Hill. And it’s made Democrats nervous that they’re playing whack-a-mole, chasing the last Trump controversy as a new one inevitably emerges. Some suspect it all may be by design.”

“For Trump’s aides, confidants, and biographers, this has a familiar feel. The Trump they know thrives on drama and chaos. When, during the campaign, he spoke about the importance of stamina and energy, it was meant both as code to mock Hillary Clinton’s health and Jeb Bush’s verve, but also in the strictly literal sense.”

“Trump believes that toughness ― or, better put, the ability to endure more pain and discomfort than the competition ― is what begets his success, his aides said. It is the best explanation they have for his kinetic, chaotic first days in office.”

Stuart Rothenberg: “Trump’s supporters surely are pleased with his populist rhetoric and actions, and relieved that he is keeping his campaign pledges. But others, who opposed him or voted for him only because they disliked Hillary Clinton, will find his agenda and approach disturbing, even alarming, and they will likely turn out in November 2018.

Trump’s fast start almost guarantees that the midterm will be about him – about how comfortable voters are with his accomplishments. The more successful he is, the more easily his party will navigate those elections.  The president’s party has lost seats in 18 of the last 20 midterm elections, so it is likely that Democrats will gain House seats next year. How vulnerable will the GOP be? Much more than you think now.”

Paul Waldman: “Republicans made a power play because it was technically legal and they figured they could get away with it. The fact that their gamble paid off doesn’t make it any less reprehensible, and Democrats should take a simple stand: This seat was Barack Obama’s to fill, and Merrick Garland should be the one occupying it. This nomination is fruit of a poisoned tree, whether the nominee is a fine fellow or not.

And to repeat: They have nothing to lose. We can be honest and acknowledge that a filibuster won’t stop Trump’s nominee from getting to the court. We know what will happen if the Democrats go through with it. Republicans will express their outrage. Mitch McConnell will say that much as he regrets it, he has no choice but to call a vote to change Senate rules to forbid filibusters of Supreme Court nominees. That vote will succeed, and the nominee will then be confirmed on a party-line (or nearly so) vote.

Yet according to this report from CNN’s Manu Raju and Ted Barrett, some Senate Democrats are nervous about what the consequences of getting too tough might be. Some of them fear that filibustering now “would mean Democrats could lose leverage in the next Supreme Court fight if Trump were to replace a more liberal justice, since the GOP now has 52 seats in the Senate.”