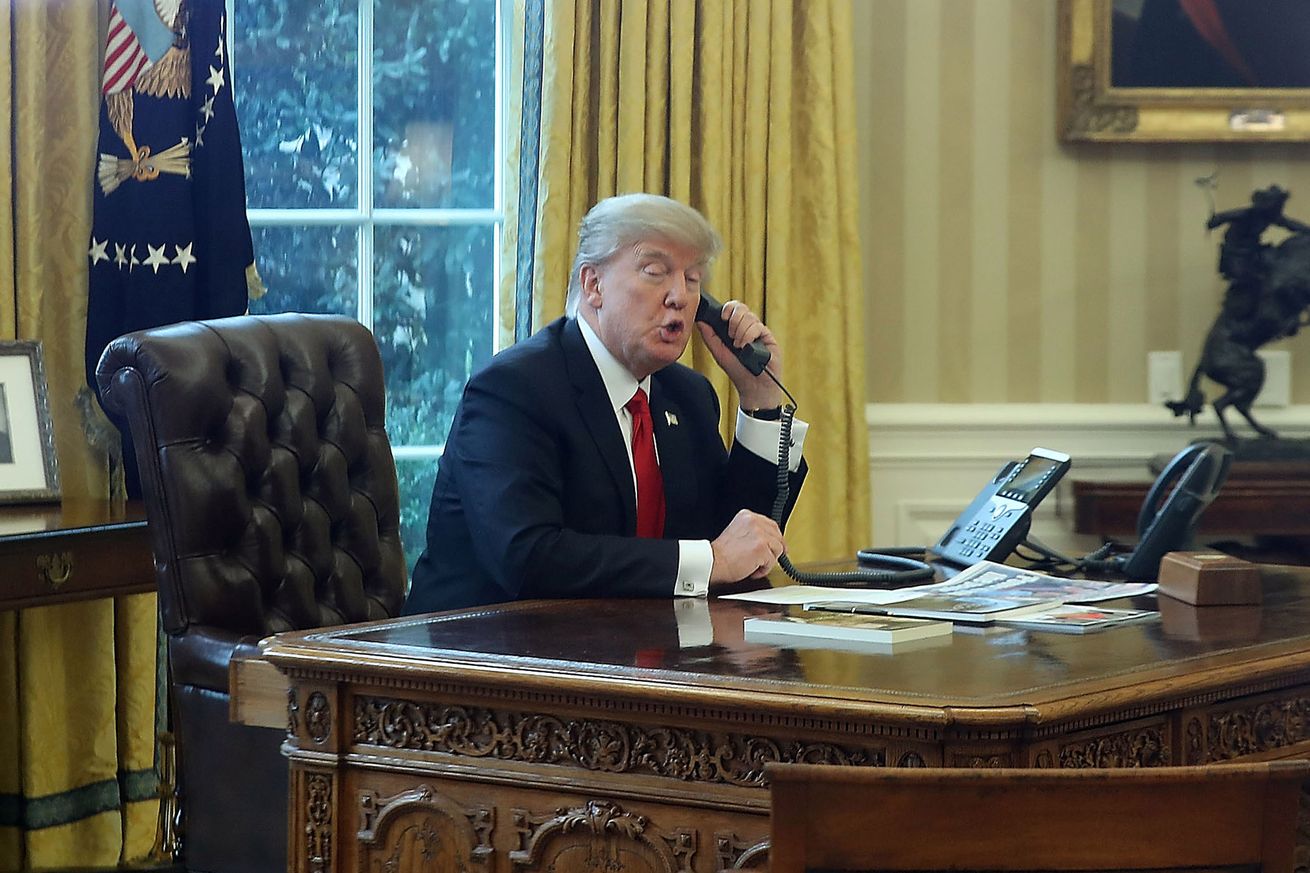 A new CBS News poll finds just 40% of Americans approve of the job he is doing — the lowest of any president just after his first inauguration since the Gallup Poll began taking those measures in 1953. Some 48% disapprove.  Meanwhile, A new Public Policy Polling survey shows 40% of American voters already want to impeach President Trump.  That’s up from 35% of voters who wanted to impeach him a week ago. Only 48% of voters say that they would be opposed to Trump’s impeachment.

Politico: “Donald Trump, a self-professed Nixon admirer, is learning this history lesson about the presidency in real time: His most dangerous enemies are people who ostensibly work for him. Modern presidents always feel hectored by the news media and harried by opposition legislators. But mortal threats to their power typically come from hostile forces inside the executive branch.”

“The phenomenon has rarely been on more vivid display, with Trump buffeted by an unprecedented barrage of leaks about his decision-making and direct challenges to the decisions themselves—a new example coming almost daily—from within the permanent bureaucracy of government.”

The simple trick to getting people to support refugees, immigrants, and Obamacare https://t.co/m3oYEFOylN

Republican Senator Jim Risch of Idaho has been receiving so many anti-Trump visitors at his Boise office (as well as calls) that he’s closed the office to visitors and asked anyone who would like to visit the office to make an appointment in advance.  Even in Idaho.

Republicans try to walk back Obamacare repeal rhetoric, but hard-liners will have none of that https://t.co/DiSudliCpO

“Congress’s rush to dismantle the Affordable Care Act, once seemingly unstoppable, is flagging badly as Republicans struggle to come up with a replacement and a key senator has declared that the effort is more a repair job than a demolition,” the New York Times reports.

“The struggles and false starts have injected more uncertainty into insurance markets that thrive on stability. Republican leaders who once saw a health law repeal as a quick first strike in the Trump era now must at least consider a worst case: unable to move forward with comprehensive health legislation, even as the uncertainty that they helped foster rattles consumers and insurers.”

James Stewart: “All new presidents undergo a learning curve. But Mr. Trump promised a seamless transition and, with a real chief executive in charge as opposed to a career politician, an administration that would function as a well-oiled machine.”

“So it doesn’t seem premature to ask some leading management experts for an assessment of Mr. Trump’s first weeks, purely from the viewpoint of organizational behavior and management effectiveness, as I did this week.”

“The unanimous verdict: Thus far, the Trump administration is a textbook case of how not to run a complex organization like the executive branch.”

Politico: “Donald Trump, a self-professed Nixon admirer, is learning this history lesson about the presidency in real time: His most dangerous enemies are people who ostensibly work for him.”

Kellyanne Conway defended the White House’s refugee ban with an assertion that appears to be factually indefensible: She made up a “massacre,” USA Today reports.

Said Conway: “I bet it’s brand new information to people that President Obama had a six-month ban on the Iraqi refugee program after two Iraqis came here to this country, were radicalized and they were the masterminds behind the Bowling Green massacre. Most people don’t know that because it didn’t get covered.”

“However, it seems likely that the incident Conway refers didn’t get covered because there is an overwhelming consensus that there was no massacre at all. She appears to have come down with another case of the ‘alternative facts.’”

Gallup: “Trump is not enjoying the type of honeymoon that the American public accorded his predecessors in their first weeks in office. Trump’s initial job approval rating was the lowest in Gallup history, and a majority of Americans continue to disapprove of the job he is doing. No other president going back to Dwight Eisenhower had majority disapproval in his first several months in office. A majority of Americans, in similar fashion, disapprove of several of the high-visibility executive actions Trump has taken within his first 10 days in the White House.”

“The Trump administration is considering a plan to weed out would-be immigrants who are likely to require public assistance, as well as to deport — when possible — immigrants already living in the United States who depend on taxpayer help,” according to a draft executive order obtained by the Washington Post.

The administration would be seeking to “deny admission to any alien who is likely to become a public charge” and to develop standards for “determining whether an alien is deportable . . . for having become a public charge within five years of entry” — receiving a certain amount of public assistance, including food stamps, Temporary Assistance for Needy Families and Medicaid.

A new Politico/Morning Consult poll finds that 25% of voters believe President Trump’s unsupported claim that millions of votes were illegally cast in the 2016 election.  However, 35% say that if there was voter fraud it’s more likely any improper votes benefited Trump while 30 percent say they benefited Hillary Clinton.

Jonathan Chait: “Democrats are reportedly tempted to abandon the filibuster, so that it remains in place for a future Court fight… But this is fantastical. There is no ‘leverage’ gained by a weapon one’s opponent can disarm at will. The Supreme Court filibuster is like a pair of handcuffs in which the handcuffed person is holding a key.”

Jason Sattler: “This is an appointment by the biggest popular vote loser of the modern era to fill a stolen seat. Pretending this is just Senate business as usual would pat the GOP on the head for pulling off the heist of the century, and it would give Trump a thumbs up for his first-week ‘shock and awe’ campaign of executive orders designed to roll back immigration, the Affordable Care Act and voting fraud. It would also show that the elected left has learned nothing in the last eight years.”

Kevin Drum: “Lots of Democrats want to take a scorched-earth approach toward the confirmation of Gorsuch … I’m totally on board with this. The Republican blockade of Garland was flat-out theft, and no party with any self-respect can let that go without a fight.”

Jim VandeHei: “The pressure to retaliate is immense.  Liberals want payback and have very few ways to exact it.  So Democrats might very well hit Republicans simply because Republicans hit them first — and block the nomination, leaving a 4-4 court. T hey can do this, under current rules, by locking arms and using the 60-vote threshold.”

President Trump “vowed to overturn a law restricting political speech by tax-exempt churches, a potentially huge victory for the religious right and a gesture to his political base,” the New York Times reports.

“Mr. Trump said his administration would ‘totally destroy’ the Johnson Amendment, which prohibits churches from engaging in political activity at the risk of losing their tax-exempt status.”

“A feeling of distrust has taken hold in the West Wing of Donald Trump’s White House and beyond, as his aides view each other and officials across the federal government and on Capitol Hill with suspicion,” Politico reports.

“The result has been a stream of leaks flowing from the White House and federal agencies, and an attempt to lock down information and communication channels that could have serious consequences across the government and at the Capitol, where Trump tries to implement and advance his agenda.”

“In the White House itself, one top aide tried to take the office slated for another aide, Steve Bannon is looking to hire his own PR guru, and the details of Trump’s calls with foreign leaders, typically closely held, are suddenly out in the open. The starkest manifestation of the paranoia has played out with Trump’s executive orders, as many key players were left in the dark as the White House forged ahead with sweeping, controversial policies.”

James Hohmann: “This is an incredibly delicate moment in the Capitol. Republicans who are wise, including Mitch McConnell, do not want to invoke the nuclear option. Smart conservatives understand that changing the rules of the Senate to allow for a simple majority to confirm Trump’s Supreme Court nominee would set a disastrous precedent, which would invariably be used to put hyper-liberal justices onto the high court in future years. Even talking about going this route poisons the well and makes it that much harder to woo the eight moderate Democrats needed to clear the current 60-vote threshold.”

“House Democrats are rallying behind a plan to make President Trump’s first speech to Congress as uncomfortable as possible by inviting guests they say will suffer under new White House policies,” The Hill reports.  “The strategy means Trump will likely face a crowd including ethnic minorities, LGBT people, undocumented immigrants, the disabled and others when he addresses a joint session on Feb. 28.”

Josh Rogin: “If the first two weeks of the Trump presidency has shown anything, it’s that chief strategist Stephen K. Bannon has outmaneuvered his White House rivals, Cabinet secretaries and even Republican leaders in Congress. But Bannon is just getting started; he’s got a longer-term strategy to dominate White House policy making for months and years.”

Time: “There is only one President at a time, and Donald Trump is not one to cede authority. But in the early days at 1600 Pennsylvania, the portly and rumpled Bannon (the only male aide who dared to visit Trump’s office without a suit and tie) has the tools to become as influential as any staffer in memory. Colleagues have dubbed him ‘the Encyclopedia’ for the range of information he carries in his head; but more than any of that, Bannon has a mind-meld with Trump.”

“They share the experience of being talkative and brash, pugnacious money magnets who never quite fit among the elite. A Democrat by heritage and Republican by choice, Bannon has come to see both parties as deeply corrupt, a belief that has shaped his recent career as a polemical filmmaker and Internet bomb thrower. A party guest recalled meeting him as a private citizen and Bannon telling him that he was like Lenin, eager to ‘bring everything crashing down, and destroy all of today’s Establishment.’”

“Democrats are moving urgently to harness the wave of grass-roots protests that have greeted President Trump in his first weeks in office to reclaim the House majority in next year’s midterm elections,” the Washington Post reports.

“As of this week, the Democratic Congressional Campaign Committee is hiring full-time operatives to do political organizing work in 20 key Republican-held districts — an unusually early investment in House races that do not even have declared candidates yet.”