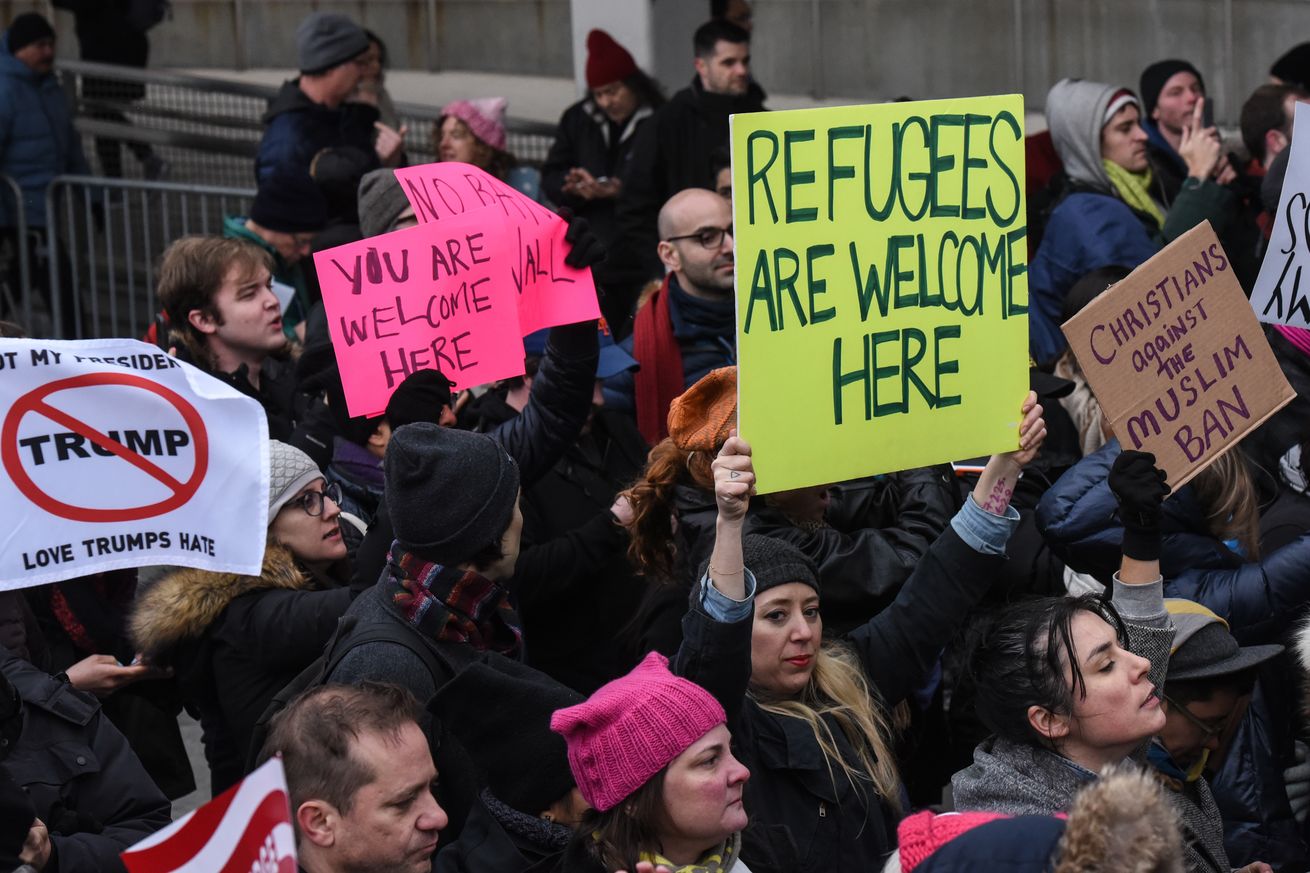 President Donald Trump’s seismic move to ban at least 134 million people from the United States and to deny entry to all refugees reverberated worldwide Saturday, as chaos and confusion rippled through US law enforcement agencies, airports and foreign capitals trying to grasp the new policy.  Trump issued the executive order on Friday, banning citizens of Iraq and six other Muslim-majority countries from entering the US for the next 90 days. It also suspends the admission of all refugees for 120 days.

Here’s the latest on the ban:

Elliot Hannon’s “Today Was the Worst Day Yet” at slate.com documents the damage Trump did with executive orders and other actions yesterday. It’s clear already that Trump’s grand strategy is to pile on so much that the media, Democrats and progressives will not have time to respond effectively — before the next headline-grabbing outrage is launched. Very similar to his campaign strategy. Hannon writes, “On Wednesday, the president of the United States made historic moves to recast the country as an angry, insular nation, one that recoils from the world around it and casts suspicion on those within and without. This is the America Donald Trump envisoned; this is the America he campaigned on; this is the country he’s delivering.” Progressive social change groups will have to step up their game to respond effectively to the Trump (Bannon) rapid-fire, ‘shock and awe’ strategy.

As you watch this unfold, think of this: what happens if they try to start deporting DACA recipients? Or kick 20 mil off health insurance?

In his Politico post “Democrats launch scorched-earth strategy against Trump,” Gabriel Debenedetti writes, “According to interviews with roughly two dozen party leaders and elected officeholders, the internal debate over whether to take the conciliatory path — to pursue a high-road approach as a contrast to Trump’s deeply polarizing and norm-violating style — is largely settled, cemented in place by a transition and first week in office that has confirmed the left’s worst fears about Trump’s temperament. …“They were entitled to a grace period, but it was midnight the night of the inauguration to 8 o’clock the next morning, when the administration sent out people to lie about numerous significant things. And the damage to the credibility of the presidency has already been profound,” said Washington Gov. Jay Inslee. “They were entitled to a grace period and they blew it. It’s been worse than I could have imagined, the first few days.”

#breaking the 1st woman who was held has been let through. Crowds chant USA as she's reunited with her family. pic.twitter.com/A7s3SIRK11

Behind the Democratic strategy on confronting Trump’s cabinet nominees, according to Leigh Ann  Caldwell at nbcnews.com: “Democrats in the Senate are in the minority and don’t have enough members to block a nominee. However, if they slow down the process, it not only gives the party more time to negatively influence public opinion of the GOP agenda, but it also stalls what Republicans hoped would be an aggressive legislative agenda that includes the repeal of the Affordable Care Act…Senate rules allow for up to 30 hours of debate on each nominee. Thirty hours of clock time could take days. Multiply that by a dozen cabinet nominees — not to mention the dozens of lower-level nominees that will come before the Senate — and it leaves much less time to achieve legislative wins….Republicans continue to argue that President Barack Obama had seven members of his cabinet confirmed on his first day. Instead, Trump has the fewest number of nominees confirmed on his first day of any president since Jimmy Carter in 1978…”The more we learn about these nominees, the clearer it becomes that Trump’s plan is to break his campaign promises, and the more the public gets fired up for a thunderous fight to stop him,” said Ben Wikler, president of the progressive grassroots group MoveOn.”

LITERALLY on the ground. Volunteer lawyers are working pro-bono on a Saturday preparing habeus corpus petitions for detainees at JFK. pic.twitter.com/ddUeQBi7AY

“The suit, filed Saturday afternoon in U.S. District Court for Northern California, argues that the order intrudes on Congress’ legislative authority and violates the Establishment Clause of the Constitution by discriminating on the basis of religion.”

To those fleeing persecution, terror & war, Canadians will welcome you, regardless of your faith. Diversity is our strength #WelcomeToCanada

Five current or former members of ISIS tell BuzzFeed that President Trump “will shorten the time it takes for us to achieve our goals.”

“One reason they cited for this optimism was Trump’s divisiveness within America, which they believed would weaken the country… ISIS also sees Trump as an ideal enemy for propaganda purposes, the former and current members of the group said, believing that his campaign’s heated rhetoric about Muslims will help the extremist group with recruitment by reinforcing its central narrative that America and the West are at war with Islam.”

President Donald Trump’s net approval rating dropped by eight points in his first week in the Oval Office, according to daily polls tracked by Gallup.

To my colleagues: don't ever again lecture me on American moral leadership if you chose to be silent today. pic.twitter.com/XW7sjmCcXh

House Speaker Paul Ryan sidestepped an opportunity to embrace President Trump’s goal of “insurance for everybody,” saying instead that congressional Republicans are aiming for “universal access,” the AP reports.

“Ever since American intelligence agencies accused Russia of trying to influence the American election, there have been questions about the proof they had to support the accusation,” the New York Times reports.

“But the news from Moscow may explain how the agencies could be so certain that it was the Russians who hacked the email of Hillary Clinton’s campaign and the Democratic National Committee. Two Russian intelligence officers who worked on cyberoperations and a Russian computer security expert have been arrested and charged with treason for providing information to the United States.”

David Frum: “A law-abiding person will want to stay as far as possible from the personal service of President Trump. As demonstrated by the sad example of Press Secretary Sean Spicer spouting glaring lies on his first day on the job, this president will demand that his aides do improper things—and the low standards of integrity in Trump’s entourage create a culture of conformity to those demands.”

“A wise patriot might be wary of working directly for or near Flynn or anybody else tied to the Russian state, the entities it controls, or Russian business interests. The National Security Council staff has engorged itself to such an enormous size in recent years—now some 400 people—that there are many important roles to fill, safely firewalled away from Flynn.”

“At the other departments or agencies of government, here’s the test: Odds are that the department or agency head will sooner or later be called upon to some improper thing at some point during the Trump administration.”

Variety: “The first primetime interview with President Trump after his official ascension to the office didn’t set the Nielsen charts aflame. In Nielsen’s preliminary ratings, President Trump’s interview with ABC News’ David Muir on Wednesday night drew a 1.7 rating in the advertiser-coveted 18-49 demographic and 7.5 million viewers on the whole, winning the night but well short of President Obama’s first primetime interview after taking office in 2009.”

“Obama’s first primetime interview — as opposed to a televised press conference or late-night talk show appearance — on March 22, 2009 notched a 3.9 rating in the 18-49 demo and drew a total audience of 17.04 million.”

David Brooks: “If Reagan’s dominant emotional note was optimism, Trump’s is fear. If Reagan’s optimism was expansive, Trump’s fear propels him to close in: Pull in from Asian entanglements through rejection of the Trans-Pacific Partnership. Pull in from European entanglements by disparaging NATO. It’s not a cowering, timid fear; it’s more a dark, resentful porcupine fear.”

“We have a word for people who are dominated by fear. We call them cowards. Trump was not a coward in the business or campaign worlds. He could take on enormous debt and had the audacity to appear at televised national debates with no clue what he was talking about. But as president his is a policy of cowardice. On every front, he wants to shrink the country into a shell.”

“Trump has changed the way the Republican Party sees the world. Republicans used to have a basic faith in the dynamism and openness of the free market. Now the party fears openness and competition.”