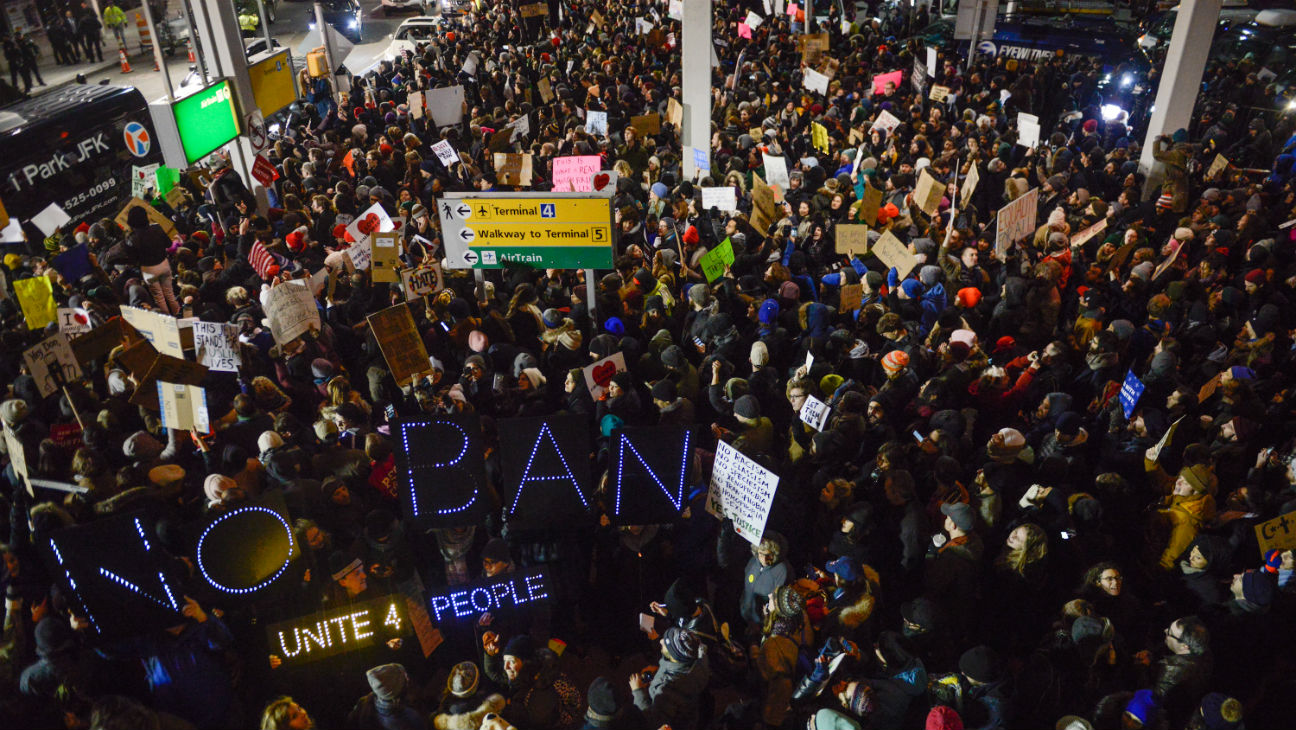 While everyone focused on our airports for a full day, President Trump removed the Director of National Intelligence and the Chairman of the Joint Chiefs from the National Security Council. It’s cool, though, he replaced them with Steve Bannon and his son in law.  I heard somewhere that the Trump Administration planned this 100 days intentionally to be a version of Shock and Awe, presumably to stun us into passivity, so that there so many outrages that the “protest class” would tire itself out, or not know where to start.

I think they have miscalculated.

And I hope there is someone within the Trump Administration like Japanese Admiral Isoroku Yamamoto after the bombing of Pearl Harbor, saying that they fear they have awoken a sleeping giant.

Most days, my feed is dominated by pictures of local protests. The march last weekend, the protests in Philadelphia midweek, and the airports tonight. These are not news reports, just people at rallies taking pictures.  And most of these rallies were not pre-planned in advance (save the Women’s March).   Most of them were spontaneous.  And when they were planned, 10 times as many people showed up than were expected.

I personally have never seen anything like it. 3,000 people turned out to Senator Jeff Merkley’s town hall when he was expecting 125.   That story has been repeated everywhere.

Going into the Trump Administration, I knew he would not pivot away from the horror he was as a candidate.  What he promised to be, he would be.   Pundits and more than a few idiot Democrats thought they could work with him here or there, to help the working class.  Those idiots ran the ideological spectrum within the party, from Bernie Sanders to Chuck Schumer.  And that would dispirit the resistance.  And I thought, through Democratic capitulation and compromise, and through the vast number of outrages Trump and Bannon would foist on us, we would all tire of being outraged all the time.  And thus protest would die out.

I am starting to reconsider that view.

Most individuals won’t be able to sustain the panic pitch of outraged opposition to Trump for four straight years, but they don’t have to, individually.   But Trump literally wakes every day saying “what can i do to foment a protest against me?”   He always needs an enemy to be compared to.  To fight against.  Standing alone in the full analytical gaze of the American press and public would destroy him, and he knows it. His vast insecurity and inferiority complex comes from a real place.

The strategy for surviving one Trump outrage so far has been to create more outrages.  To create the bigger story so the press and public moves on.  But the downside of doing that is that fresh outrages daily will invigorate an opposition that might otherwise tire and will invigorate different and disparate corners of that opposition.

I have seen it in my own life.  People who have never been political before are now what I would consider an activist.   What Trump is doing is creating new and fresh activists every day.  Thus, opposition to Trump will never tire.  It will never be shocked and awed.

Stay strong America. I am proud to see the actions and response from friends, family, and even strangers over the last eight days.  Be constructive with your outrage.  Attend a protest.  Organize.  Voice your opinion.  Never listen to those who say “enough with the politics, enough with the anger.”   Our anger is righteous.  And we will win in the end.

7 comments on “Shock and Awe”