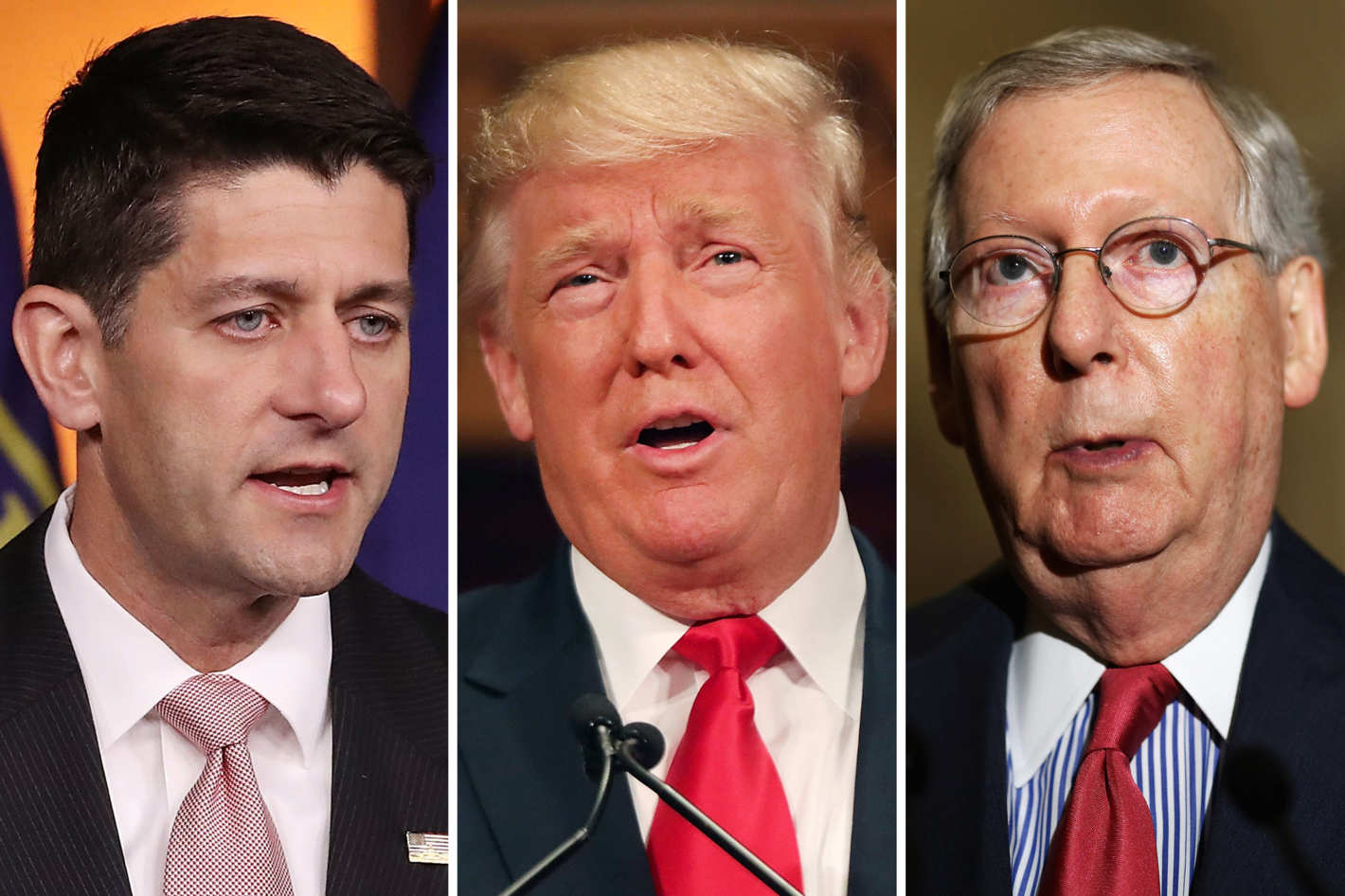 “Republican lawmakers aired sharp concerns about their party’s quick push to repeal the Affordable Care Act inside a closed-door meeting Thursday,” according to a recording of the session obtained by the Washington Post.

“Senators and House members expressed a range of concerns about the task ahead: how to prepare a replacement plan that can be ready to launch at the time of repeal; how to avoid deep damage to the health insurance market; how to keep premiums affordable for middle-class families; even how to avoid the political consequences of defunding Planned Parenthood, the women’s health-care organization, as many Republicans hope to do with the repeal of the ACA.”

Said Rep. Tom McClintock (R-CA): “We’d better be sure that we’re prepared to live with the market we’ve created. That’s going to be called Trumpcare. Republicans will own that lock, stock and barrel, and we’ll be judged in the election less than two years away.”

A new Quinnipiac poll shows that just 16% of Americans want Congress to repeal all of Obamacare, while 51% say it should repeal only parts and 30% say it shouldn’t repeal anything.  More important: When asked if they would be more likely or less likely to vote for a senator or member of Congress who votes for repeal, voters said “less likely” by nearly a 2-to-1 margin.

Senate Majority Leader Mitch McConnell (R-KY) “all but ruled out the possibility of a change to the filibuster rule this year,” The Hill reports.

McConnell made his comment “one day after President Trump said he wants Senate Republicans to strip Democrats of the power to filibuster Supreme Court nominees if they attempt to block his pick.”  Said McConnell: “Senate rules are a matter for the Senate and a lot of other people have opinions. We’ve already adopted the rules for this Congress at the beginning of the year. Basically we didn’t adopt any because in the Senate rules are permanent, unlike the House which every two year adopts a new set of rules. We don’t.”

President Trump proposed getting rid of the Electoral College in a meeting with congressional leaders, the Wall Street Journal reports.

“During the gathering, the talk turned to campaigns, elections and voter fraud. Mr. Trump then told the group that he was interested in getting rid of the Electoral College and replacing it with a national popular vote, say people who attended. Mr. Trump lost the popular vote to Democratic nominee Hillary Clinton, a fact that has irritated the president to the point that he has called for a national probe of alleged voter fraud.”

“Senate Majority Leader Mitch McConnell, a Kentucky Republican, spoke up, pointing him to the 2000 recount in Florida that lasted more than a month until it was halted by the U.S. Supreme Court. Imagine what a nationwide recount would look like. Mr. Trump demurred, and said he was fine to leave the current system in place.”

Trump gave another Supreme Court hint today and it's not good news for Bill Pryor https://t.co/2lAC7H2HVX

Jon Meacham on the problem with the Trump is Andrew Jackson theory: “The biggest distinction is experience. Jackson came to the presidency as a former judge, general, senator and presidential candidate. Despite his rabble-rousing image — opponents worried Jackson would become an ‘American Bonaparte’ — Jackson was in fact at home in the precincts of power because he’d been around the capital a good deal before becoming president.”

“The other key difference is that Jackson knew how to manage his own weaknesses. He wasn’t always successful at it, but a Jacksonian temper tantrum or threat was often calculated, not unhinged. We don’t yet know whether Trump can pull off the same feat of compensating for — and even leveraging — his hypersensitivity, for instance, and his weakness for hyperbole and chaos. I hope he can do what Jackson did and turn these vices into means for virtuous ends. To me, that’s perhaps the greatest question about Trump and temperament.”

If maintaining your sanity while trying to keep track of the Trump administration seems to be increasingly difficult, Adam Gopnik suggests that’s a feature, not a bug.

The blind, blatant disregard for truth is offered without even the sugar-façade of sweetness of temper or equableness or entertainment—offered not with a sheen of condescending consensus but in an ancient tone of rage, vanity, and vengeance. Trump is pure raging authoritarian id…

When Trump repeats the ridiculous story about the three million illegal voters—a story that no one who knows, that not a single White House “staffer,” not a single Republican congressman actually believes to be true—he does not really care if anyone believes it, even if, at some crazy level, he does, sort of. People aren’t meant to believe it; they’re meant to be intimidated by it. The lie is not a claim about specific facts; the lunacy is a deliberate challenge to the whole larger idea of sanity. Once a lie that big is in circulation, trying to reel the conversation back into the territory of rational argument becomes impossible.

Ryan Lizza sums up how Trump’s feud with Mexico is another indicator of his disastrous approach to foreign policy.

Trump is turning American diplomacy into a series of personal relationships unguided by strategy or forethought. He praises foreign leaders who flatter him, such as Vladimir Putin, and marginalizes those who criticize him, like Peña Nieto, without regard to the strategic value of the relationship. He is turning foreign policy into a version of professional wrestling, where alliances and rivalries shift based on petty personal factors.

…Trump’s treatment of Mexico reinforces an emerging world view that casts aside the values at the center of American foreign policy since the Second World War. As with his degrading comments about nato, his view that Taiwanese democracy and independence is a negotiating chip with China, his cavalier attitude toward Russia’s annexation of Crimea and meddling in Ukraine, his abandonment of the Trans-Pacific Partnership without even a cursory consultation with allies in the region who fear Chinese hegemony, his obsessions with the use of torture and the seizure of Iraq’s oil fields, Trump’s views on U.S.-Mexico relations are devoid of the liberal values that have kept Western democracies together for decades.

“The Trump administration has pulled the plug on all Obamacare outreach and advertising in the crucial final days of the 2017 enrollment season,” Politico reports.

“Even ads that had already been placed and paid for have been pulled.”

Playbook: “The Arizona Republican has been relishing his role as Trump’s tormentor. Over the past several days, Senate Armed Services Committee chairman has publicly broken with Trump over his voter fraud claims and reports that Trump was considering reinstating torture and panned his OMB pick over military spending and votes to shut down the government. And while some of his colleagues are giving Trump latitude on building a wall on the Mexico border, McCain said Thursday he won’t support it without seeing more details and continues to have concerns with Trump’s relationship with Putin.”

“Not a lot of Republicans are willing to go toe to toe with Trump for fear they’ll end up battered and bullied by the president and his loyal army of followers. But the 80-year-old former Republican presidential nominee just got re-elected. He clearly doesn’t like Trump or his policies and isn’t afraid to tell everyone about it.”

Wall Street Journal editorial: “Some six million U.S. jobs depend on trade with Mexico. But the much larger risk is that Mexicans will sour on progress toward joining their North American neighbors as prosperous free-market democracies. This is the moment that Mexico’s left—dormant but not dead—has been waiting for as anti-American Andrés Manuel López Obrador prepares to run for President again in 2018.”

“Mr. Trump is a foreign-affairs neophyte, but he is already learning that nations can’t be bullied like GOP candidates or CEOs. They have their own nationalist political dynamics and when attacked they push back. Mr. Trump said as a candidate that he’d treat America’s friends better than Mr. Obama did, but his first move has been to treat Mexico like Mr. Obama treated Israel. On present course he may get comparable results, or worse.”

President  Trump “will not attend the annual Alfalfa Club dinner Saturday night, an exclusive black-tie dinner — and White House roast — that every president since Ronald Reagan has attended,” Politico reports.

“The swanky event gathers various elements of the Washington elite to toast the new administration — as well as fire a few barbed jokes at the new president. The event is closed off to reporters so the ribbing tends to be more biting.”

A new Quinnipiac poll finds President Trump begins his term with a  36% to 44% job approval rating from American voters with 19% undecided.

Key finding: 78% of voters survey say Hatch should “definitely not” or “probably not” run for re-election in 2018.