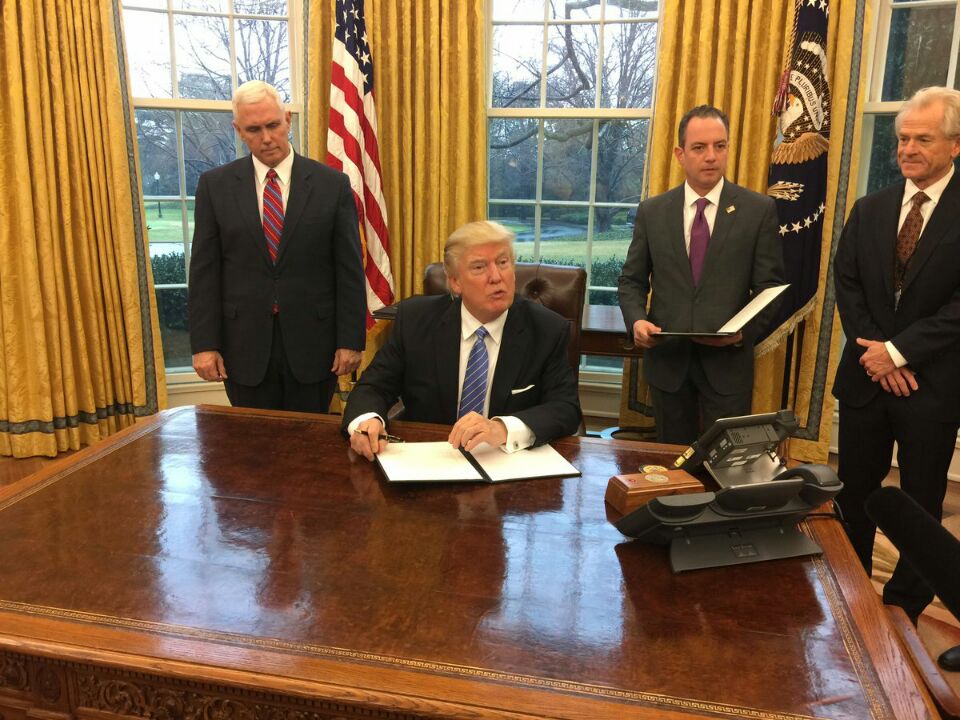 The Washington Post has a must-read on the power struggles already happening inside the Trump White House.

“The broader power struggles within the Trump operation have touched everything from the new administration’s communications shop to the expansive role of the president’s son-in-law to the formation of Trump’s political organization. At the center, as always, is Trump himself, whose ascent to the White House seems to have only heightened his acute sensitivity to criticism.”

“President Trump used his first official meeting with congressional leaders on Monday to gripe about his loss of the popular vote, falsely telling the lawmakers that he would have won a majority if millions of illegal immigrants had not voted against him,” the New York Times reports.

“The claim, which he has made before on Twitter, has been judged to be untrue by numerous fact-checkers. But the new president’s willingness to bring it up at Monday’s White House reception in the State Dining Room is an indication that he remains focused on his election even assuming power.”

“It’s not just about a crowd size. There’s this constant theme to undercut the enormous support he has. And it’s unbelievably frustrating when you’re continually told it’s not big enough; it’s not good enough. You can’t win.” — White House press secretary Sean Spicer, quoted by The Hill.

Aww, poor baby.  This is what you signed up for.

Graydon Carter: “In manner and execution, and in his almost touching desire to be liked, Trump comes across not as larger than life but as one of the smaller people on the world stage. He always had a sort of oafish charisma: as we used to say at Spy, a hustler on his best behavior. In small groups, as many can attest, he has mastered the salesman’s trick of creating faux sincerity and intimacy when answering a question by including the first name of the person who asked it.”

“But no amount of grifter charm can conceal his alarming disregard for facts and truth. It’s this combination of utter ignorance and complete certitude that his detractors find most terrifying. Trump not only doesn’t know the unknowns but appears to have no interest in even knowing the knowns. Fact-checkers can’t keep up. How often does Obama play golf? Who cares—let’s inflate the number by 50 percent. What’s the murder rate in a major American city? What the hell—let’s multiply it by 10.”

“The writer Michael O’Donoghue used to say that the definition of insanity is the length of time it takes for a lie to be uncovered. The shorter the period, the crazier you are. By this standard, our president will be setting a new threshold for that definition.”

Josh Marshall on the White House leaks about the first disastrous weekend for President Trump: “There is, to put it mildly, a rather clearly recurring theme: a torqued up man-child, alternatively rageful and fragile, both grandiose and profoundly insecure. To a degree it is difficult to maintain perspective since the contrast between the departed and incoming Presidents could simply not be any greater – either in the composure and steadiness of the man in question or in his associates’ willingness to share his secrets with the press. Would it even be possible to mount a leak investigation when everyone seems to be leaking?

It is a bracing picture, chilling and hilarious. But don’t lose the point: no White House leaks like this, leaks this much or leaks this casually about the President’s emotional weakness.”

Of all the commentary about the #WomensMarch, Francis Wilkinson captured the impact best. He draws a contrast between the attempt by Trump to tout his populist roots in his inaugural address and the way that myth was shattered on Saturday.

In his broken beer bottle of a speech, Trump jabbed at the “establishment” he had defeated. “For too long,” he said, “a small group in our nation’s capital has reaped the rewards of government while the people have borne the cost.”… “What truly matters is not which party controls our government, but whether our government is controlled by the people. “January 20th, 2017, will be remembered as the day the people became the rulers of this nation again.”  Like countless populists before him, Trump has set himself up as the representative, voice and will of “the people.”…

Neither Trump nor the organizers of the Women’s March could’ve known how the populist words of his inaugural would be so devastatingly refuted by Saturday’s tide of humanity. True, it’s a short-term victory. The Trump administration will be the arena for a long and fierce battle. We are at the opening bell.

But it mattered. Everyone in Washington — from a determined Speaker Paul Ryan to a shellshocked White House, from tentative Democrats climbing out from the rubble to liberal interest groups searching for an ideological anchor — just got a look at a very different people from the one described by Trump.

Looking at this crowd, if the Dems think they should move away from their multi-racial, female-centered base, they're crazy — @amjoy

Here’s how some Democrats want to build on the momentum created on Saturday:  Sen. Ben Cardin joined with Senate Democrats to reintroduce the Equal Rights Amendment.

“Many Americans would be shocked to find out that the U.S. Constitution still lacks a provision ensuring gender equality,” the Maryland Democrat said in a statement. “Think about that: in 2017, women lack the same constitutional protections as men. This is clearly wrong and needs permanent correction.”…

Some words of wisdom for Democrats from former Secretary of Labor Robert Reich, via RealClearPolitics: “…Democrats must diligently seek to establish countervailing power – stronger trade unions, community banks, more incentives for employee ownership and small businesses, and electoral reforms that get big money out of politics and expand the right to vote…The Party must change from being a giant fundraising machine to a movement. It needs to unite the poor, working class, and middle class, black and white – who haven’t had a raise in 30 years, and who feel angry, powerless, and disenfranchised.”

CBS News Now Confirms Trump Brought a Cheering Section to His CIA Speech – and the CIA Isn’t Happy About It https://t.co/Z8MhrOUM5r pic.twitter.com/FtUtC3So98

Jeet Heer: “Turning a speech at an intelligence agency into a political rally is a deep betrayal of political norms. But it is very much in keeping with Trump’s disturbing habit of claiming the armed wing of the state, including the military and law enforcement, as his political allies. He said early in the CIA speech that “the military gave us tremendous percentages of votes. We were unbelievably successful in the election with getting the vote of the military. And probably almost everybody in this room voted for me, but I will not ask you to raise your hands if you did.” At the end of his speech, Trump sounded like a pathetic suitor making his final pitch: “I just wanted to really say that I love you, I respect you. There’s nobody I respect more.”

While Trump’s antics might have impressed his fans watching from home, they seem to have done little to assuage worries in the agency. The New Yorker interviewed a variety of intelligence experts, including John MacGaffin, a high-ranking veteran of the agency. “What self-centered, irrational decision process got him to this travesty?” MacGaffin told the magazine. “Most importantly, how will that process serve us when the issues he must address are dangerous and incredibly complex? This is scary stuff!”

Trump’s self-centered decision process is authoritarianism, and it’s anything but irrational. He campaigned in an authoritarian style, with rallies where he riled up large crowds to jeer at the press and protesters. One of the defining tactics of his campaign was disinformation, coupled with accusations of the same against the media. That hasn’t changed now that Trump is president. The administration’s unified anti-press and anti-fact message over the weekend is part of a deliberate, long-term strategy that was hatched many months ago, and is only likely to intensify. The president will wage a rhetorical war against the media, with the intent of delegitimizing one of the few institutions that can hold him accountable, and he will wage it with his most effective weapon: Lies, damned lies, and false statistics.”

Rolling Stone offers an anecdote from when Mike Pence invited Democratic legislators to the governor’s mansion for dinner:

“Mother, Mother, who prepared our meal this evening?”  The legislators looked at one another, speaking with their eyes: He just called his wife “Mother.”   Maybe it was a joke, the legislator reasoned. But a few minutes later, Pence shouted again.  “Mother, Mother, whose china are we eating on?”   Mother Pence went on a long discourse about where the china was from. A little later, the legislators stumbled out, wondering what was weirder: Pence’s inability to make conversation, or calling his wife “Mother” in the second decade of the 21st century.