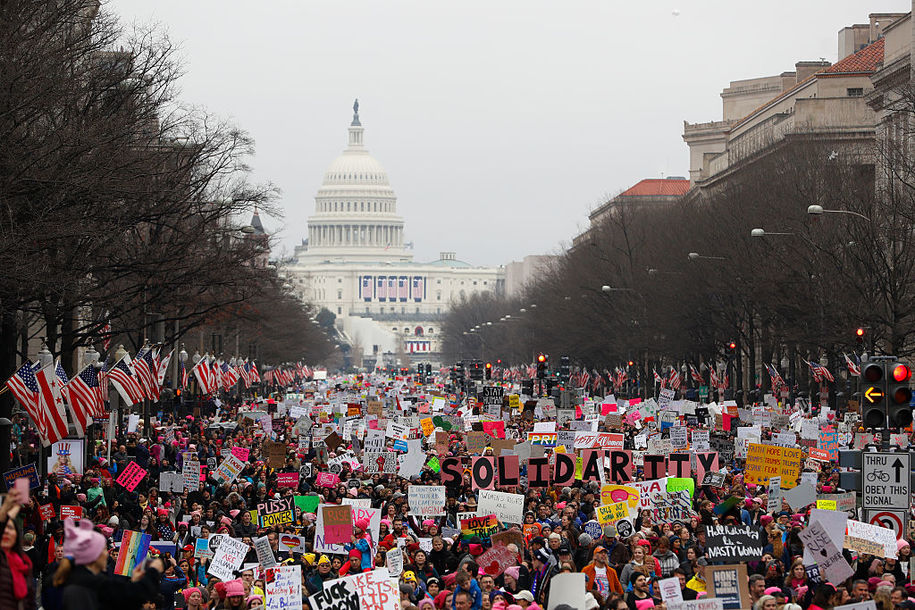 First, you should read the article – especially if you’ve ever wondered what mansplaining looks like. This piece is classic.

In the first place, this movement focuses on the wrong issues. Of course, many marchers came with broad anti-Trump agendas, but they were marching under the conventional structure in which the central issues were clear. As The Washington Post reported, they were “reproductive rights, equal pay, affordable health care, action on climate change.”

These are all important matters, and they tend to be voting issues for many upper-middle-class voters in university towns and coastal cities. But this is 2017. Ethnic populism is rising around the world. The crucial problems today concern the way technology and globalization are decimating jobs and tearing the social fabric; the way migration is redefining nation-states; the way the post-World War II order is increasingly being rejected as a means to keep the peace.

All the big things that were once taken for granted are now under assault: globalization, capitalism, adherence to the Constitution, the American-led global order. If you’re not engaging these issues first, you’re not going to be in the main arena of national life. [emphasis mine]

That’s three paragraphs that say, “You’re doing it wrong! You need to focus on what I think is important.”

Finally, identity politics is too small for this moment. On Friday, Trump offered a version of unabashed populist nationalism. On Saturday, the anti-Trump forces could have offered a red, white and blue alternative patriotism, a modern, forward-looking patriotism based on pluralism, dynamism, growth, racial and gender equality and global engagement.

Did Mr. Brooks read the Women’s March platform? I doubt it, because he couldn’t have reduced this march to the WaPo quote of “reproductive rights, equal pay, affordable health care, action on climate change.” Even better question, did David Brooks attend the march and interview the participants before writing this piece? One would hope so. If not, where is he getting his information?

Instead, the marches offered the pink hats, an anti-Trump movement built, oddly, around Planned Parenthood, and lots of signs with the word “pussy” in them. The definition of America is up for grabs. Our fundamental institutions have been exposed as shockingly hollow. But the marches couldn’t escape the language and tropes of identity politics Civil Rights. [edit mine]

Remind me again, what issues did the Men’s March focus on? Oh right, men didn’t organize a march, but many of them sure did complain about how this march came to be and what it supposedly focused on. (sigh, #notallmen) Why actually read what women wrote in their platform when you can just make up what you think it’s about?

Look, I don’t disagree with his issues. They are extremely important. What always leaves me scratching my head is how he, and others, insist that their issues are the only issues that should be addressed, and how, in order to achieve success in their issues, we not only have to focus entirely on what they’ve decided matters, but we need to jettison everything else. Believe it or not, many of Brooks’ concerns line up with the issues the Women’s March cared about. We aren’t the ones reducing our platform, and I’m confused (and annoyed) as to why Brooks and others feel the necessity to do this. Maybe because it makes it easier to dismiss?

I would advise caution, because if we aren’t careful we may win back those white male voters at the expense of everyone else.

Also, there is a big difference between “celebrating differences” and inclusion. But Brooks’ is just being insulting now. Inclusion is the way you grow a movement.

All these issues intersect. If your main issue is the economy/income inequality then you should realize how race, gender, sexual orientation, religion, etc. impacts these group’s economy; you should realize how being forced to give birth impacts a woman’s, or a couple’s, economy. Raising the minimum wage (which I 100% support) won’t mean much to a couple unable to access reproductive services and forced to keep having children. Child care alone, would eat up that extra income, plus a lot more.

Despite what Brooks’ claims, the Women’s March was most certainly anti-Trump and anti-Republican policies. If you don’t believe that, then would you cheer on a President Pence? Do you really believe that just getting rid of Trump solves the problem? That if he were gone the GOP wouldn’t repeal the ACA, would stop passing their favorite reproductive laws, that they would tax the rich, etc., etc., etc.?

Perhaps, instead of telling people “you’re doing it wrong” it would be more productive to actually do something, and stop calling out people (who you have more in common with then you seem to realize) by dismissing issues that affect their daily lives as not important. If reproductive health, equal pay, immigration, unions, etc. isn’t a priority to you, it’s probably because these issues don’t impact your life… or your economy. That’s pretty much the definition of privilege.

9 comments on “David Brooks Sums Up the Women’s March: You’re Doing It Wrong”