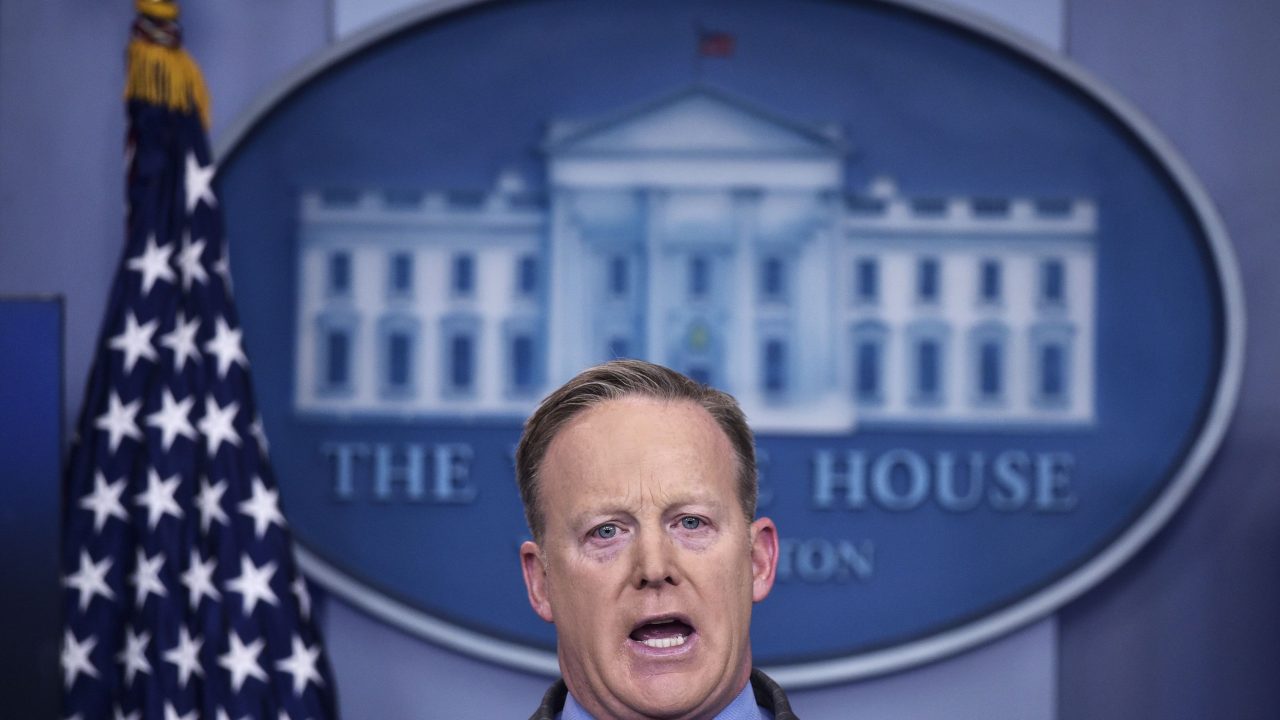 “President Trump and his staff spent their first full day in the White House waging a bitter war against the news media over depictions of the crowd at the inauguration on Friday,” the New York Times reports.  “In a pair of angry public appearances on Saturday, Mr. Trump and his White House press secretary, Sean Spicer, excoriated the news media for what they said were deliberate efforts to understate the number of people who had gathered on the National Mall.”

Associated Press: “Trump is wrong. Photos of the National Mall from his inauguration make clear that the crowd did not extend to the Washington Monument. Large swaths of empty space are visible on the Mall. Thin crowds and partially empty bleachers also dotted the inaugural parade route. Hotels across the District of Columbia reported vacancies, a rarity for an event as large as a presidential inauguration.”

Jonathan Chait: “It matters that Trump drew a sparse crowd to inaugural festivities that he had billed beforehand as a historic, Jacksonian uprising of The People. And it matters much more that millions of Americans came out on a Saturday to register their protest. It is not only catharsis, though catharsis is better than depression. The message has been heard by the political class, Republican and Democratic alike…”

“The demobilization of the Democratic base is over. The prospect of a Democratic wave may not stop Republicans, and it may not even give them pause. But the governing party had probably assumed the clock would not start for months on the liberal backlash. Now the clock is ticking already.”

Playbook: “Mitch McConnell swapped seats with Sen. Roy Blunt (R-MO), the chairman of the inaugural committee, so he could sit next to Donald Trump. McConnell and Trump spoke for a long period of time — and if you know McConnell, he doesn’t talk to anyone for that long unless he has something to say. The senator was doing a lot of the talking, and he’s not much for small talk. This was a one-on-one chat, with even Mike Pence laying back. McConnell and Trump were both talking with their hands, with McConnell at one point making a ‘T’ with his two hands, appearing to illustrate a collision.”

“McConnell is the ultimate Capitol operator. He’ll be able to tell Trump what is — and, more importantly, what isn’t — possible. Plus, he doesn’t have the scar tissue with Trump that Ryan has.”

New York Times: “While some of his advisers suggested that he would slip back into a more conventional Republican approach, Mr. Trump dropped hints in interviews, Twitter posts and other public comments that he intended to push his party away from its free-market, internationalist dogma on trade, foreign alliances, immigration, infrastructure spending and prescription drug access.”

“The hints are over.”

“An inaugural speech delivered with the same blunt force that propelled Mr. Trump’s insurgent campaign has dashed Republican hopes for a more traditional agenda. With his “new decree,” he declared himself modern America’s first populist president — and all but dared his own party to resist his Republican reformation.”

Eliot A Cohen of the American Interest: “Trump lies because it is in his nature to lie. One suspects that there is nothing inside this man that quivers, however slightly, at an untruth. It is not uncommon for politicians, to a greater extent than most people, to believe what they want to believe, or to change their take on reality depending on what is convenient for them. With Trump, however, this will to believe is pathological: his psyche is so completely besotted by Trump that there is no room for anything, or anybody else.”

“We will not change him—no one can. His children may be able to soften the edges and his most trusted advisers may deflect him off his erratic courses, but nothing will teach him gravitas, magnanimity, or wisdom. Until he is impeached, thrown out of office in four years, succumbs to illness, or lasts through eight years, he is what we have learned he is, and will remain so. The beginning of wisdom will be to treat his office with respect, but him with none, because it will achieve nothing, and because as a human being he deserves none. He will remain erratic, temperamental, vengeful, and perhaps most of all, deeply insecure. A man who mocks John McCain, denounces Gold Star parents, snarls at an actor who spoofs him, and makes fun of a crippled reporter is someone whose core is empty, and whose need for approbation is unlimited because the void within him is so complete.”

Politico: “Obama’s enduring legacy will be as a cultural symbol, the first African-American president who represented a current of social change in the country and reflected the values and attitudes of the progressive elite. He will be remembered—and revered—by his admirers as his generation’s JFK. Lasting substantive achievements are besides the point when ascending to this iconic status.”

“The standards here are largely stylistic. And Obama checks nearly every box: He was a young president; a photogenic man with a good-looking family; a symbol of generational change; an orator given to flights of inspiring rhetoric; if not a wit exactly, a facile talker with a taste for mocking the other side.”

Aides insisted during the transition that President Trump wrote his own inaugural address but a White House official now tells the Wall Street Journal that “much of the speech was written by Stephen Miller and Steve Bannon, two of Mr. Trump’s top advisers.”

A new poll from Fox News finds that 50 percent of voters feel favorably about the Affordable Care Act — a sharp uptick from the 41 percent who felt favorably about the law the last time the network polled, in the summer of 2015.  In the Fox News poll, somewhat notably, Obamacare polls as more popular than President-elect Donald Trump, whom 42 percent of respondents view favorably. The law does not poll as favorably as its namesake, President Obama, who receives an approval rating of 60 percent.

The Intercept: “On Saturday, the Women’s March on Washington will kick off what opponents of the incoming administration hope will be a new era of demonstrations against the Republican agenda. But in some states, nonviolent demonstrating may soon carry increased legal risks — including punishing fines and significant prison terms — for people who participate in protests involving civil disobedience. Over the past few weeks, Republican legislators across the country have quietly introduced a number of proposals to criminalize and discourage peaceful protest.”