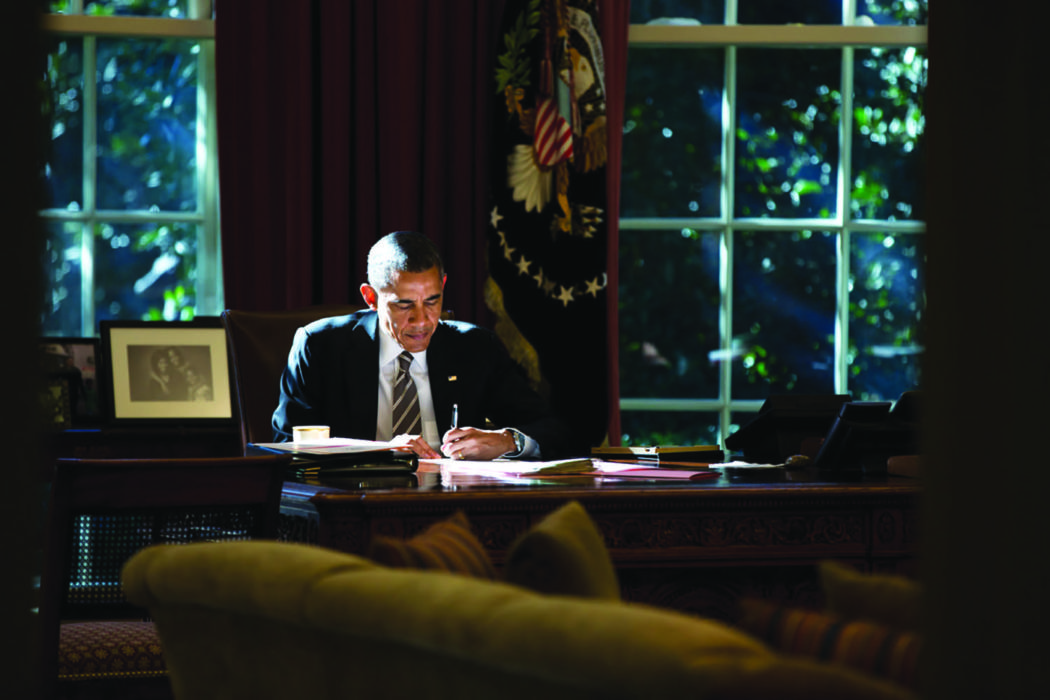 President Obama “largely commuted the remaining prison sentence of Chelsea Manning, the army intelligence analyst convicted of an enormous 2010 leak that revealed American military and diplomatic activities across the world, disrupted the administration, and made WikiLeaks, the recipient of those disclosures, famous,” the New York Times reports.

A new Wall Street Journal/NBC News poll finds a combined 55% of Americans believe Barack Obama – compared with the past several U.S. presidents – will either go down as one of the very best or be better than most.

The same poll finds the portion of Americans who think the Affordable Care Act is a “good idea” is 45%, its highest mark since pollsters began asking about President Obama’s vision for a health overhaul in April 2009.  The latest number compares with 41% who think the health law is a “bad idea.”

President-elect Donald J. Trump and congressional Republicans appear to have accomplished a feat that President Obama, with all the power at his disposal, could not in the past seven years: They have galvanized outspoken support for the Affordable Care Act.

People who benefit from the law are flooding Congress with testimonials. Angry consumers are confronting Republican lawmakers. And Democrats who saw the law as a political liability in recent elections have suddenly found their voice, proudly defending the law now that it is in trouble.

Thousands of people across the country held rallies over the weekend to save the health care law, which Republicans moved last week to repeal with a first but crucial legislative step. A widely circulated video showed Representative Mike Coffman, Republican of Colorado, eluding constituents who had wanted to meet with him to express their concerns on Saturday at a community event in Aurora, Colo. Rallies on Sunday to save the health law drew robust crowds around the country.

The fierceness of the Save Obamacare movement is surprising Republicans and the media.

At least 18 million people would lose health insurance in the first year if Republicans move ahead with plans to repeal major portions of the Affordable Care Act without a replacement plan, according to a CBO report.

Washington Post: “The number of people without insurance would grow to about 32 million within the first decade if congressional Republicans follow a 2015 plan to repeal the health-care law without an alternative, the new report says. It also estimates that health insurance premiums for people buying individual non-group coverage would double within a decade, further complicating GOP promises that people will not lose coverage under their plan.”

More from the CBO report on what happens if Republicans repeal Obamacare.

CBO estimates that, compared to what’s already projected to happen under current law:

* 18 million more people would become uninsured in the first full year after the bill’s enactment — rising to 32 million more people by 2026;
* premiums in the individual insurance marketplaces would soar — they’d go up 20 to 25 percent above currently projected increases in the first full year after repeal, and “would about double by 2026”;
* and access to coverage on the individual markets would plummet — about half of the US population would live in areas “that would have no insurer participating” in the individual market, CBO projects.

Jason Zengerle: “In the weeks since the election, this Plan B has been taking shape, as Obama has consulted with a range of people, from current and former advisers to historians, about how he should conduct himself in his post-presidency, doing much of his thinking during long days on the golf course throughout his Hawaiian vacation in December.”

“While it’s clear that Obama will have to remain more immersed in politics than he’d planned, it remains a mystery what that role will now look like. Certainly he’ll be asked to help rebuild the Democratic Party. Already, Obama has been drawn into the jockeying among candidates vying to lead the Democratic National Committee—a process he expected to sit out.”

Said one Obama aide: “Nobody wants to know what the Clintons think—they’re totally checked out. It’s falling on us just by default.”

It’s Obama’s party now.  He wants to rebuild it in his retirement.

Washington Post: “Trump is a man isolated, increasingly cosseted away from the voters who lifted him to his seemingly improbable victory. He favors his own people and his own places, creating the veneer of accessibility — his tweets reach millions and he still answers his cellphone — while placing himself in almost entirely habitual settings.”

“He spends most of his days in Trump Tower, with few close friends and few meaningful one-on-one interactions beyond the family members, advisers and loyalists who are whisked by gold elevator to his 26th-floor office for private audiences. Trump rarely leaves, not even for a breath of fresh air; nor does he encounter many people he does not already know or who do not work for him.”

Mike Allen: “Republican heads are spinning. They are dumbfounded by a blizzard of mystifying or contradictory messages coming from Trump.”

“The inside take: Republicans who are hoping/praying things will be fine, and even some Trump insiders, tell us that these comments show he is adjusting more slowly to being president-elect than they had hoped. Even if he believes some or all of this, some things are better kept to yourself when you’re on the precipice of the presidency.”

Senate Minority Leader Chuck Schumer (D-NY) told CNN that Donald Trump’s pick to quarterback the replacement of Obamacare, Tom Price, might have broken the law with a questionable stock purchase.

Said Schumer: “If he knew about it, it could very well be a violation of the law. Now they say there’s a broker, it’s kind of strange that this broker would pick this stock totally independently of him introducing legislation that’s so narrow and specific to this company.”

New York Times: “Mr. Trump repeatedly sought business in Russia as far back as 1987, when he traveled there to explore building a hotel. He applied for his trademark in the country as early as 1996. And his children and associates have appeared in Moscow over and over in search of joint ventures, meeting with developers and government officials. During a trip in 2006, Mr. Sater and two of Mr. Trump’s children, Donald Jr. and Ivanka, stayed at the historic Hotel National Moscow opposite the Kremlin, connecting with potential partners over the course of several days. As recently as 2013, Mr. Trump himself was in Moscow. He had sold Russian real estate developers the right to host his Miss Universe pageant that year, and he used the visit as a chance to discuss development deals, writing on Twitter at the time: ‘TRUMP TOWER-MOSCOW is next.’”

Politico: “Since the election, Paul Ryan has accommodated and deferred to Donald Trump on all sorts of issues they don’t see eye-to-eye on. But when it comes to Ryan’s career-defining cause — overhauling Medicare and other entitlements — the speaker has held his ground. The clashing philosophies between the GOP’s two top pols — Trump once called Ryan’s doctrine ‘political suicide’ — is about to come to a head. Left unresolved, it threatens to sink tax reform, a top priority for both men.”

“Senate Democrats may not have landed a kill shot when it comes to Trump’s cabinet nominees, but that hasn’t tamped down their overall belief that they are well-positioned going into the second week of appointment hearings — especially after the latest Price and Puzder reports,” Playbook reports.

Said one Democratic aide: “Many of these nominees are at the point where even if they’re confirmed, they have reached the ‘embattled’ status that, at best, erodes any momentum that Trump’s nominees might have offered him, and at worst will get in their way as they try to implement Trump’s agenda.”

James Hohmann: “The conventional wisdom that all of Trump’s cabinet picks will be confirmed by the Senate shifted somewhat over the long weekend, and the odds are increasing that at least one will be stopped. Democrats continue to express some hope about blocking Steve Mnuchin for Treasury of Tom Price for HHS, but secretary of labor-designee Andy Puzder seems like the more vulnerable target.”

Michael Tomasky has some salient observations on political clock management in his Daily Beast post, “GOP’s Rush to Rubber-Stamp Trump Nominees: Destroy What We Can, While We Can.” Tomasky observes, “A clock is ticking on the walls of leading Republicans and conservative organizations. They have 80 years of history to undo. Workplace regulations, environmental regulations, workers’ protections, social safety-net provisions, various minority-group protections, non-discrimination laws, and most of all business and corporate regulations—all of these and more have to be, uh, reexamined these next four years. Every day counts…That’s the only way to understand congressional Republicans’ solidarity with Trump: They’ll let him have his Twitter tirades and little victory dances in Elkhart, Indiana, over 700 jobs, as long as he lets them take apart the New Deal. That’s what explains McConnell’s hurry to fill Trump’s Cabinet.”

In his New York Times article, “When He Goes Low, They Go … Where? Democrats Mull How to Confront Trump,” Jonathan Martin writes, “Democrats, here and in Washington, say it is folly to engage him on his preferred terrain of insults and bombast. They suggest that one of Hillary Clinton’s mistakes was to try to isolate him from the Republican Party by portraying him as an aberrant figure…The more effective course, Democrats say, is to focus on policy and assail Mr. Trump for not living up to his populist promises as he installs a largely wealthy cabinet and begins rolling back the Affordable Care Act…But, despite all predictions in the Republican primary contests and then in the general election, Mr. Trump’s succession of perceived missteps never proved fatal. It turned out that waiting for his inevitable collapse based on his behavior amounted to a grave miscalculation of what the electorate cared most about.”