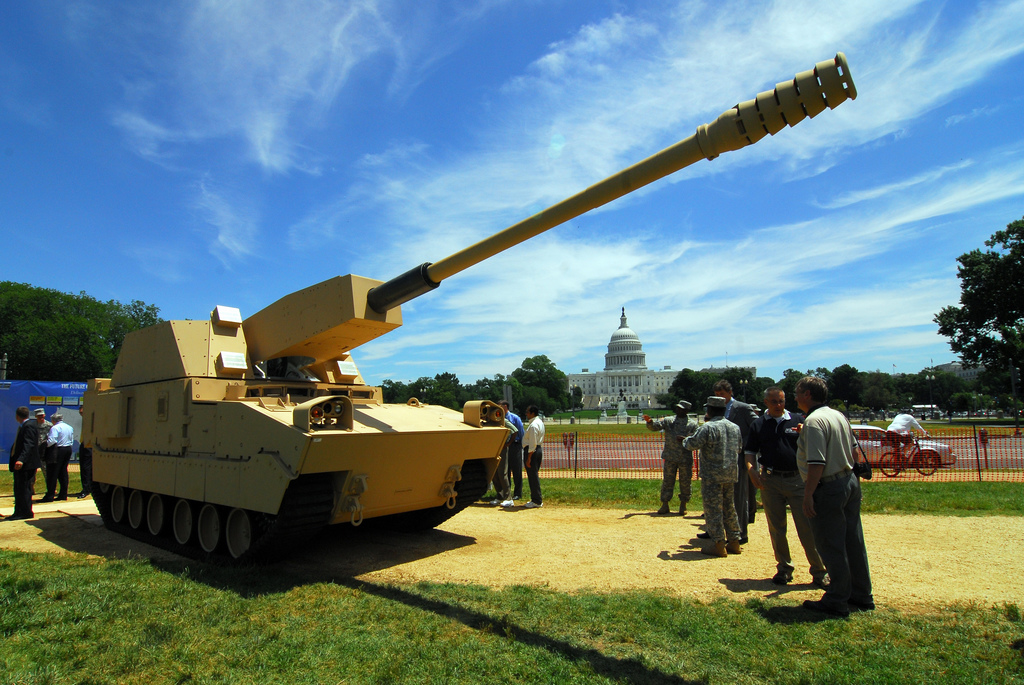 So Trump is threatening the Congressional GOP on Twitter.  Washington Post: “Trump said he expects Republicans in Congress to move quickly and in unison in the coming weeks on other priorities as well, including enacting sweeping tax cuts and beginning the building of a wall along the U.S.-Mexico border.”

“Trump warned Republicans that if the party splinters or slows his agenda, he is ready to use the power of the presidency — and Twitter — to usher his legislation to passage.” Said Trump: “The Congress can’t get cold feet because the people will not let that happen.”

And if they get cold feet because the vast majority of the American people hate you and your agenda, what then?   And how are you going to force legislation through, you small handed wannabe tyrant?  Sending a tank up the steps of the Capitol?

I love how Trump is so stupid that he keeps f*cking himself and his Republican Party by overpromising things he can’t deliver, and things that his Republican Party won’t deliver for him.   President-elect Donald Trump told the Washington Post that “he is nearing completion of a plan to replace President Obama’s signature health-care law with the goal of ‘insurance for everybody,’ while also vowing to force drug companies to negotiate directly with the government on prices in Medicare and Medicaid.”

“Trump’s plan is likely to face questions from the right, following years of GOP opposition to further expansion of government involvement in the health-care system, and from those on the left, who see his ideas as disruptive to changes brought by the Affordable Care Act that have extended coverage to tens of millions of Americans.”

The only way you can have Insurance for Everybody is Medicare for All.  Single Payer.   The GOP ain’t passing that and Mr. Trump, you aren’t promising that.   You are just lying.

Margaret Hartmann: “So to sum up, Trump’s Obamacare replacement is definitely not imaginary, it will allow every American to be “beautifully covered,” and presidential Twitter bullying will be key to its implementation. Trump must be confident that all of this will come to pass. If not, why tie himself to the arduous Obamacare reform effort with a memorable promise like “insurance for everybody”?”

Color me skeptical. No, incredulous.

President-elect Donald Trump told the Times of London that he was open to working with Russian President Vladimir Putin on a nuclear reduction deal to ease American sanctions.

Politico: “Although Trump’s team Sunday denied a separate Times of London report that his first foreign visit was to be a summit with Putin in Reykjavik, Trump himself revealed an openness to easing sanctions on Russia that the U.S. and NATO allies have imposed in response to Russia’s annexation of territory in Ukraine and Crimea.”

Senate Democratic Leader Chuck Schumer (D-NY) “has made it crystal clear: If Republicans repeal Obamacare without immediately implementing a plan to replace it, Democrats will not help them out of a pickle down the road,” The Hill reports.

“Senate Democratic sources familiar with Schumer’s thinking say he will not engage in any negotiations to pass a watered-down version of the landmark healthcare reform law if Republicans unilaterally force its repeal first under special budgetary rules.”

Said one Democratic senator: “That’s not a close call. They’re doing something so extraordinary reckless. You cannot reward hostage taking.”

Adam Gopnik: “The best way to be sure that 2017 is not 1934 is to act as though it were. We must learn and relearn that age’s necessary lessons: that meek submission is the most short-sighted of policies; that waiting for the other, more vulnerable group to protest first will only increase the isolation of us all. We must refuse to think that if we play nice and don’t make trouble, our group won’t be harmed. Calm but consistent opposition shared by a broad front of committed and constitutionally-minded protesters — it’s easy to say, fiendishly hard to do, and necessary to accomplish if we are to save the beautiful music of American democracy.”

President-elect Donald Trump no longer plans to visit the National African American Museum on Martin Luther King Day “due to scheduling issues,” transition officials tell ABC News.  LOL.  More likley is that he found out not only is John Lewis going to be there, but that there is a whole section of that museum dedicated to Lewis’ ACTIONS.   What an unimaginable coward Trump is.

Outgoing CIA Director John Brennan ripped into Donald Trump for “talking and tweeting” about possibly easing sanctions against Russia, saying the president-elect lacks a full understanding of the threat Moscow poses to the United States, the Associated Press reports.

Said Brennan: “I think he has to be mindful that he does not have a full appreciation and understanding of what the implications are of going down that road.”

Hundred of constituents showed up to meet with Rep. Mike Coffman (R-CO) at a local community center in Aurora, Colorado to talk to the lawmaker about his plan to vote to repeal the Affordable Care Act, KUSA-TV reports.

But instead of being let into the main hall as a group, they were told the congressman was only doing on-on-ones and they would have to wait their turn. He then secretly left early through a back door.

Meanwhile, “[t]housands of people showed up in freezing temperatures at a community college in Michigan on Sunday to support the federal health car law, one of several rallies Democrats are staging around the country to stoke resistance to Republican efforts to repeal President Obama’s signature achievement,” the AP reports.

“Sen. Bernie Sanders was expected to speak at Macomb Community College in the Detroit suburb of Warren, where people lined up four abreast for the length of 3 or 4 football fiends waiting to get in to the rally.”

Sen. Diane Feinstein (D-CA) told NBC News that she believes Russia tried to interfere in the presidential election and that their activity ultimately altered the outcome.

Said Feinstein: “I’ve had all of the major classified briefings. I have been astonished at what has been a two-year effort at Russia to spearfish, to hack, to provide disinformation, propaganda wherever it really could. And I think this has been a very sophisticated effort.”

She added: “I’m certainly not gonna leave this in limbo, because this is the future of America, it’s the future of democracy. And if we can’t carry out an election without disinformation being pumped into it by another country, we’ve got a huge destruction of our system going on so we have to — we have to be full and robust in this look.”

Richard Brookhiser: “My instinct about Mr. Trump’s instincts is that he will want bold strokes soon. Start building a fence, if not a wall. Talk up infrastructure, even if no plans are in place yet. Nominate a surprising Supreme Court justice (Ted Cruz?). Make splashy, friendly trips to Israel, to Britain (in need of friends post-Brexit) and, if not to Russia, to some in-between rendezvous with Vladimir Putin, for a possible deal: You take Ukraine, the West keeps the Baltics, and together we’ll bomb Islamic State.”

“Mr. Trump’s first hundred days are harder to predict than any other president’s because he is unprecedented. Every previous president had held a position of public responsibility, either as a politician or a general. Donald Trump, uniquely, has no experience of leadership, and we have no experience of him leading. He doesn’t yet know what he is doing, and we have no way of knowing what he might do.”

“Cheer up—after the first hundred days, there are only 1,361 left.”

Politico: “Ted Cruz met with Donald Trump exactly one week after Election Day. As it turned out, Cruz’s tete-a-tete with the president-elect he had spurned from the stage of the Republican National Convention just months before wasn’t the most consequential meeting he would have that day. After his talk with Trump, the Texas senator and his chief of staff, David Polyansky, then sat down with his chief strategist, Stephen Bannon, who sounded him out about his interest in filling the Supreme Court vacancy created by the late Antonin Scalia. Cruz – widely considered one of the best Supreme Court litigators of his generation – swatted down the idea, according to four people to whom he has relayed the conversation.”

“Handing Cruz a lifetime appointment to the high court would have been a political masterstroke. It would have simultaneously eliminated Trump’s chief adversary within the Republican Party and elated conservatives. That may not happen, but the conversations Cruz had that day with Trump and several of his aides touched off a congenial and cooperative relationship between the onetime rivals. Though Cruz may have been one of Trump’s most vocal critics during the campaign, as Inauguration Day nears, he has become perhaps the president-elect’s most important – and most unexpected – ally in the Senate.”

In an appearance on the ABC News Sunday morning show This Week, incoming White House Chief of Staff Reince Priebus warned the Director of the Office of Government Ethics to “be careful” about criticizing President-Elect Trump’s conflicts of interest.

On Wednesday Director Walter Shaub Jr. called Trump’s plan to separate himself from his business “wholly inadequate” and “doesn’t meet the standards” set by other presidents or even Trump’s own nominees.

Said Priebus: “The head of the government ethics ought to be careful, because that person is becoming extremely political. Apparently, may have made a — publicly supported Hillary Clinton as calling out the president with information on Twitter about our disentangle — disentangling of the business over a month ago. So I’m not so sure what this person at Government Ethics, what sort of standing he has anymore in giving these opinions. I think Jason Chaffetz was correct to call for an investigation into the Government Ethics Department in the government for the positions that they’ve taken in this campaign.”

Michael Eric Dyson on how black Americans are, in a way, actually relieved to see Obama go.

Black America has held its collective breath during every second of Barack Obama’s presidency. I remember stumping early for the Illinois senator, only to have black people I met on the campaign trail tell me that they couldn’t possibly vote for my man. Not only was he not as well known, or beloved, as his opponent Hillary Clinton, but didn’t I know that he’d be harmed if he even got close to the White House? “You know they’re going to shoot him.”  […]

Death has been the existential arc for some of the most prominent black leaders since the 1960s. It was true of Dr. King, and before him, Malcolm X, and before him, Medgar Evers. Leaders who have survived have been dogged by the threat of death. The former leader of the National Urban League, Vernon Jordan, survived an assassination attempt in 1980. Al Sharpton was stabbed in 1991 as he prepared to lead a protest march. Jesse Jackson endured death threats when he contended for the presidency in 1988. The paradox that surrounds such figures is irresistible. The invincible are the vulnerable; the heroic are the tragic; the iconic are, too often, posthumously celebrated.