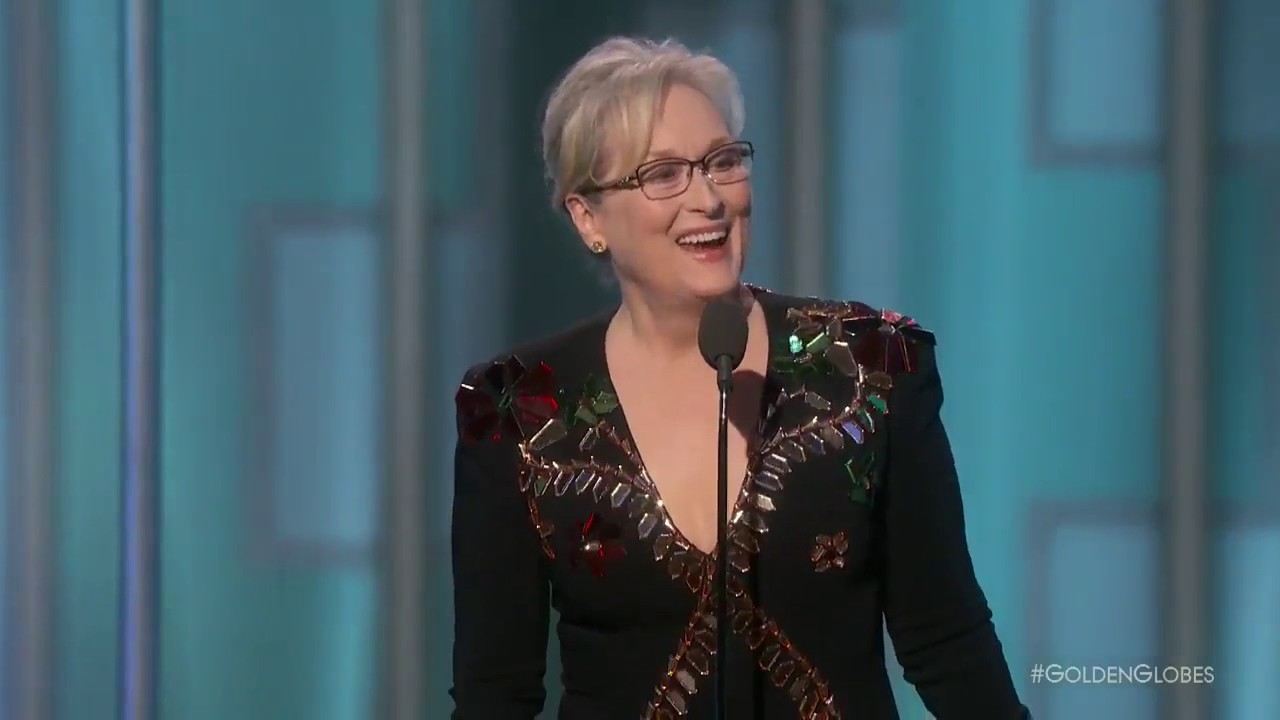 Actress Meryl Streep called out President-elect Donald Trump during a speech at the Golden Globes — without even mentioning his name, the New York Times reports.

Said Streep: “An actor’s only job is to enter the lives of people and let you feel what that feels like … there was one performance this year that stunned me. It sank its hooks in my heart. It was that moment when the person asking to sit in the most respected seat in our country imitated a disabled reporter — someone he outranked in privilege, power and the capacity to fight back. It kind of broke my heart when I saw it.”

She continued: “This instinct to humiliate, when it’s modeled by someone in the public platform, by someone powerful, it filters down into everybody’s life, because it kind of gives permission for other people to do the same thing. Disrespect invites disrespect. Violence invites violence. And when the powerful use their position to bully others, we all lose.”

Trump responded on Twitter calling Streep “one of the most over-rated actresses in Hollywood.”

Just remembered this— the Clinton camp put out a 6 min. vid detailing the reasons why Putin wanted Trump to win. pic.twitter.com/kBiD4voz20

“President-elect Donald Trump plans to give his Cabinet secretaries and top aides significant latitude to run their federal agencies, marking a sharp departure from Barack Obama’s tightly controlled management style, according to people involved in and close to the transition,” Politico reports.

“Trump, they say, doesn’t usually like getting into day-to-day minutiae or taking lengthy briefings on issues. He doesn’t have particularly strong feelings on the intricacies of some government issues and agencies, these people say, and would rather focus on high-profile issues, publicity and his brand.”

“And he’s expected to grant his Cabinet lots of autonomy — at least until he sees something as a problem or an issue involves significant publicity or money.”

Doyle McManus: “To outward appearances, Donald Trump’s transition has been humming steadily toward his inauguration on Jan. 20. The president-elect has named all but a few members of his prospective Cabinet, and some will begin confirmation hearings this week. Meanwhile, Trump Tower has issued a torrent of White House staff announcements, from a new chief of staff, Republican Party chairman Reince Priebus, to a reality TV star, Omarosa Manigault. Yet there are signs of trouble, and veterans of past administrations from both parties have warned that chaos almost surely lies ahead.”

Ha’aretz: “Suspicions in the main corruption affair involving Prime Minister Benjamin Netanyahu are backed by a tape documenting alleged contacts between Netanyahu and a businessman over mutual benefits.”

“At the heart of the affair, dubbed Case 2000, is alleged evidence of the businessman’s support that would help Netanyahu remain in office. In exchange, the prime minister would ensure the businessman huge financial benefits.”

“It may be said that the affair is based on solid evidence that will be difficult to dispute, like that provided by former Prime Minister Ehud Olmert’s bureau chief Shula Zaken about Olmert: a series of tapes in which the prime minister’s own voice is heard. People who spoke with Netanyahu over the weekend, after his second police interrogation amid corruption allegations, said he was surprised by the evidence against him.”

It looks like neither Democrats nor the Office of Government Ethics are going to be hustled by the Team Trump/Mitch McConnell strategy of stampeding a bunch of his cabinet nominations through the confirmation process all at once without the traditional ethics review before the hearings. Now, Walter M. Shaub Jr., director of the Office of Government Ethics, has released a statement saying that the rushed confirmation timetable is “of great concern to me” because of the attempt to skip the ethics review. Apparently, the Republicans don’t yet get that pretending they have a big popular vote mandate like Reagan 1980 is not quite the same thing as actually having one. Ed O’Keefe and Sean Sullivan report on the controversy at the Washington Post, noting “Ethics experts from both political parties expressed dismay at the possibility that confirmation hearings would proceed before the OGE reviews are completed.” While it seems likely that nearly all of Trump’s nominees will eventually be confirmed, Republicans are clearly concerned that many, if not most of them, have some potentially embarrassing ethical issues, and they would like to minimize the damage.

It seems only fair to commend state Democratic Parties in those instances when they do a good job of making room for exciting new leaders. In that regard, Brian Eason’s “Working-class mind-set fueled Duran’s historic rise to House Speaker” at The Denver Post profiles an impressive new leader, Crisanta Duran, who at age 36 ascends to the speakership of the legislature of a pivotal swing state. The first Latina speaker of the Colorado state House, Duran, who addressed the Democratic National Convention last year, checks an array of demographic boxes, including Mexican, Indian and French ancestry and she is the daughter of a labor union leader and granddaughter of a steelworker, served as a union staff attorney herself, and enthusiastically champions a working-class agenda. She is described in the article as an “incredibly strategic,” skilled negotiator, as well as a “warrior.” Dems should more pro-actively do whatever is necessary to encourage more such young and dynamic leaders to emerge in the states.

Why Trump still hasn’t named a leader for the Department of Veterans Affairs – The Washington Post https://t.co/geAxOHm8To

“President-elect Trump says that information published by Wikileaks, which the U.S. intelligence community says was hacked by Russia, had ‘absolutely no effect on the outcome of the election.’ This was not the view of candidate Trump, who talked about Wikileaks and the content of the emails it released at least 164 times in last month of the campaign.”

“ThinkProgress calculated the number by reviewing transcripts of Trump’s speeches, media appearances and debates over the last 30 days of the campaign.”

This level of persistence from @chriscuomo is needed from all media covering the Trump Administration. https://t.co/vkGCYwY37v via @mediaite

Republicans are preparing to repeal the Affordable Care Act, and have promised to replace it with something that doesn’t leave more than 20 million Americans stranded without health insurance.

But they still haven’t come up with a replacement. “We haven’t coalesced around a solution for six years,” Republican Senator Tom Cotton admitted last week.  “Kicking the can down the road for a year or two years isn’t going to make it any easier to solve.“

They won’t solve it. They can’t and won’t replace Obamacare, for three big reasons [abbreviated, more detail in post — ed.].

The people's President. Hillary tonight at the final performance of The Color Purple. pic.twitter.com/ph9Ju9uIm2