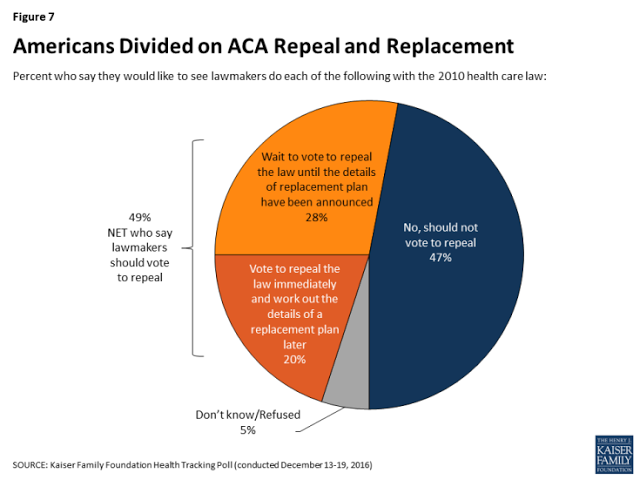 Alternate Title: The ACA has taken center stage, and it’s a Yuge problem for the GOP.

I have never claimed the Affordable Care Act (ACA) is perfect. I have always pointed out its flaws and ways to improve it. What I also pointed out is that the ACA was bigger than its parts, that it created a mindset that would be impossible to repeal – A mindset that says, “Health care is a right, and everyone deserves it.” That’s. Important. And it’s not going away.

Republicans are facing that mindset. They are starting to squirm. Last week I wrote about how cheap campaign rhetoric makes for impossible governing:

Governing is hard, guys – especially when your plans will result in people losing their health insurance and preexisting conditions are no longer covered. Hope all that over-the-top rhetoric was worth where you find yourself now.

Well, it’s no longer campaign rhetoric. It’s no longer an easy, cheap way to fire up your base who doesn’t understand how the ACA functions. It’s time to walk your talk – and boy, did you talk over the last 8 years. You talked so much that your supporters stormed the castle with pitchforks in hand. Guess who lives in the castle now.

TPM has a post up titled: Five Points On Where The Obamacare Repeal Saga Stands Right Now. It’s worth your time to read in its entirety. Please notice, these points (problems) don’t even touch on the most difficult part of how to replace the ACA. This article only addresses the problems of repeal.

Here are the 5 points:

This strikes me as a ridiculous question. Of course, repeal and replacement need to happen at the same time. Republicans know this, but they’ve boxed themselves in. They have to repeal Obamacare – it probably, given all their talk, has to be one of the first things they do. There’s no way around this. Add to this that they have no replacement plan – at least not one that doesn’t result in millions of people losing their health insurance, which they are now on record promising that that won’t happen – and we can see the walls closing in. Those promises are going to be difficult, if not impossible, to keep.

2. Should repeal help pay for a replacement?

Oh what a tangled web we weave.

From the article: “The Obamacare repeal bill passed by Congress and vetoed last year by President Obama immediately repealed taxes that have helped pay for the program. If the new repeal effort eliminates those revenue sources immediately, paying for the replacement plan become politically very difficult.

Some Republicans have acknowledged that a replacing Obamacare will be costly, and the political hurdles to re-raising taxes after the ACA’s revenue boosters are dismantled is high.

“There are a lot of conversations going on about whether to hold on to some of that to fund appropriate replacements or not, and what the right timing frame is to set for that replacement to be in place,” Sen. Roy Blunt (R-MO) said on Capitol Hill Thursday.

Among the options being considered is delaying Obamacare taxes for the phase-out period, rather than repealing them entirely, so they’ll be available to fund an ACA alternative. Additionally, the Senate bill that will act as a vehicle for repeal lays the groundwork for a reserve fund to capture the money that would be saved by dismantling some aspects of Obamacare.”

So… they want/need to keep those tax dollars to fund their replacement? They need tax dollars for their plan? How many of their supporters get this? Not many, would be my guess. I swear, at the rate they’re going they’ll keep everything in the ACA the same and simply call it Trumpcare and FCA (Freedom Care Act). It’s scary how I can see that happening.

3. Should insurers be “bailed out” to stabilize the post-repeal marketplace?

LOL! Is this really a debate? Of course, they’ll bail out insurers. They’ll have to if they stick with repeal without replace.

This is the problem that comes when you choose rhetoric over substance – when you wear only your campaign hat instead of your thinking cap.

From the article: “GOP lawmakers are promising a stable transition, but facing an irony that the sort of provisions that would incentivize insurers to stay in the individual market while a replacement is put together are similar to ACA measures they railed against in the Obama era.

Some Republicans are admitting that they’ll have to temporarily put their disgust with so-called “insurer bailouts” on hold to smooth the dismantling of Obamacare, while others worry that may make them look like hypocrites or are even expressing a frustration that they would need to help insurers at all.”

This is another instance of campaign rhetoric coming back to haunt the GOP. My first reaction to this question was, “Duh, of course they’ll defund PP. That promise is right up there with repealing Obamacare!”

But there are more cracks within the party.

From the article: “Though Senate Republicans were able to muster up the votes to pass the defund Planned Parenthood provision when it was part of the 2015 repeal bill, it’s proven to be a thorny issue for some GOP lawmakers. Collins has opposed the measure, and Sen. Lisa Murkowski (R-AK), who supported the 2015 bill, voted against defunding Planned Parenthood in other legislation.”

Seems like the GOP can always “muster up” votes when they won’t count and are for show – it’s quite another story when they actually have to govern.

5. Should Medicaid expansion be repealed?

It’s like the GOP thinks no one has ever listened to what they say. Like defunding Planned Parenthood, why is this even a question? They’ve been clear in their “waste, fraud and abuse” position when it comes to Medicaid. But, here we are.

From the article: “The 2015 House repeal bill did away with the federal funding for Medicaid expansion after two years. And in interviews with TPM, it is clear that Republicans from states like West Virginia and Ohio –where Medicaid expansion had drastically lowered the uninsured rate– have an interest in protecting it.”

In other words, expanding Medicaid worked – and it worked for *gasp* white people. West Virginia (according to the census) is 93.6% white. Ohio is 82.7% white. Guess who will be hurt the most in these states should the Medicaid expansion be repealed?

Here’s the deal, there are going to be a lot of uninsured Trump supporters if Republicans do what they were flippin’ elected to do. I’m trying to “muster up” sympathy, but I’m having trouble generating that emotion. It’s a shame that so many Trump supporters didn’t consider their own situations when voting against those other people getting stuff. They are in for a rude awakening.

I’m not sure how everything on this list will come about, but my money’s on defunding Planned Parenthood and the Medicaid expansion happening, because, you know… women and poor people.

Note to elected Dems: DO NOT ASSIST WITH THIS NONSENSE. This is a Republican mess. Add your support and it becomes ours as well. Just… No.

4 comments on “The ACA’s Biggest Accomplishment – Health Care Is A Right. Good Luck Repealing That, Republicans”